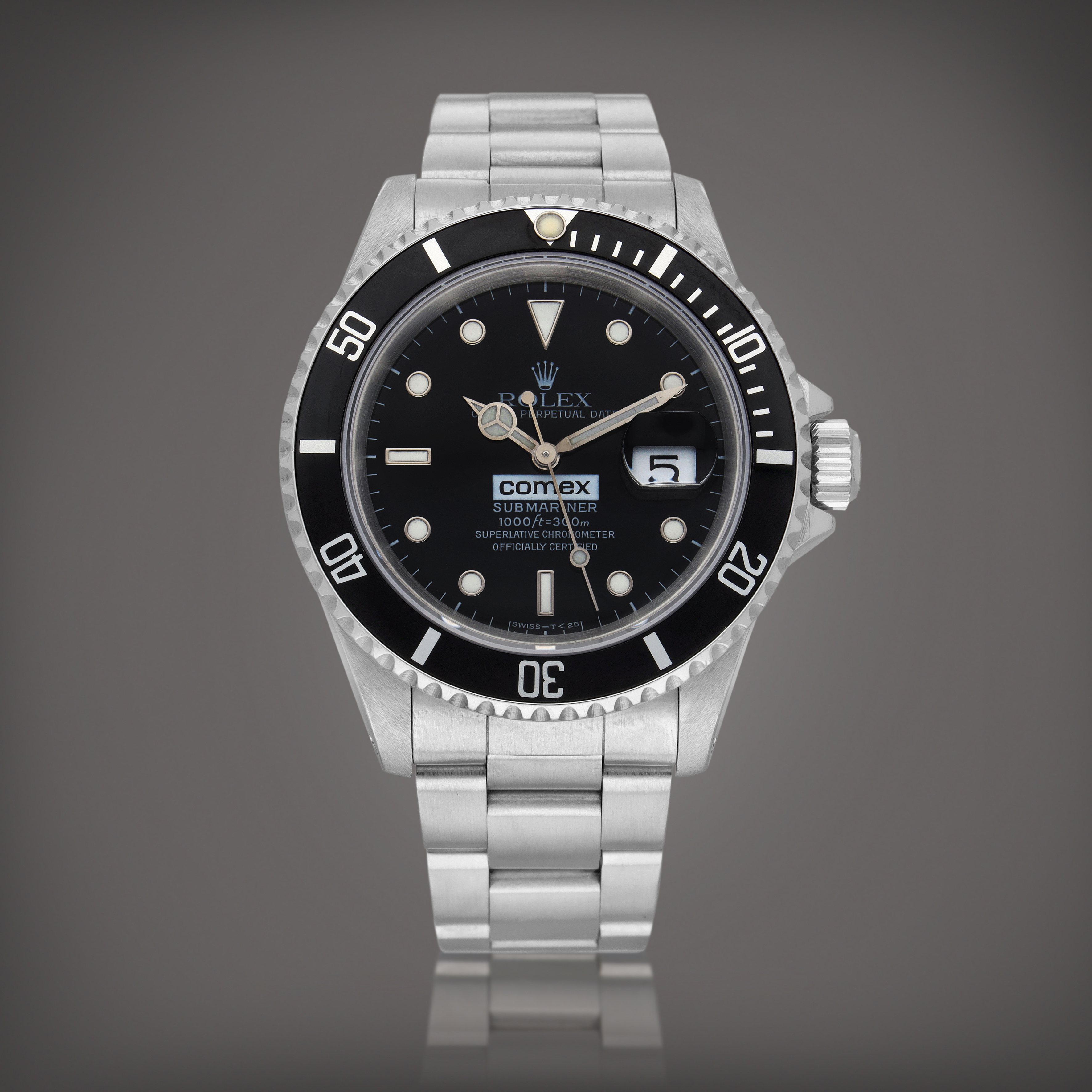 A stainless steel wristwatch with date and bracelet

MVT: is running at the time of cataloging. The date is advancing.

DIAL: is in good condition. The hands present some scratches, in particular the hour hand. The hands and indexes present no reaction to UV-lighting.

While it is utterly undisputed that Rolex is well renowned for their collection of modern watches, their versatility and sturdy history, too, makes them a brand highly celebrated for collectable vintage timepieces. Among Rolex’s most famed watches are those made in partnership with COMEX. A French diving company founded by Henri Germain Delauze in 1961, COMEX and Rolex came into union in 1970 under a shared motive—to reach new, unprecedented depths in the underwater world. Rolex hit the ground running first in 1967 with the release of the first watch to ever be equipped with a helium escape valve. This new technology, though, needed to be refined and professionally tested—this is where COMEX came into the picture. The Rolex-COMEX strategic partnership consisted of Rolex providing COMEX with watches from their Submariner and Sea-Dweller series entirely free of cost and, in return, COMEX would send Rolex detailed performance reports and analyses.

Despite the partnership spanning a lengthy 27 years from 1970 to 1997 and seeing the release of 9 watches—references 5513, 5514, 1665, 1680, 16660, 16800, 16610, 168000, 16600—in both Submariner and Sea-Dweller series, Rolex-COMEX watches were produced in an extremely limited quantity. Furthermore, these already-limited watches had such a narrow, specific focus for underwater exploration that they were never sold publicly. And, having undergone extensive testing in highly extreme conditions, the small handful of watches were damaged over time. Thus, to have one’s hands on a COMEX watch is an utmost rarity.

The present watch is a Rolex COMEX reference 16610. In production from 1986 to 1997, the 16610 is one of the later, more modern models characterized by a 1000ft/300m depth rating, sapphire crystal, cyclops window, caliber 3135 movement, and quick-set date function. But perhaps the most notable feature of the 16610 is its co-branded dial. To have the COMEX logo present on the dial is an incredible rarity and most certainly increases the value and collectability of the piece. The 16610, additionally, is the last Rolex model to display the COMEX logo atop its dial. In the ten-year period that this reference was in production, it is estimated that only 100 to 250 examples were made in total. On the back of this present watch, the COMEX issue number, 6394, can also be seen. Considering both fashion and function, this watch is undoubtedly a collector’s treasure. Coupled with its extreme exclusivity and rigorous rarity, the Rolex COMEX is perhaps the most collectible of vintage watches to date.