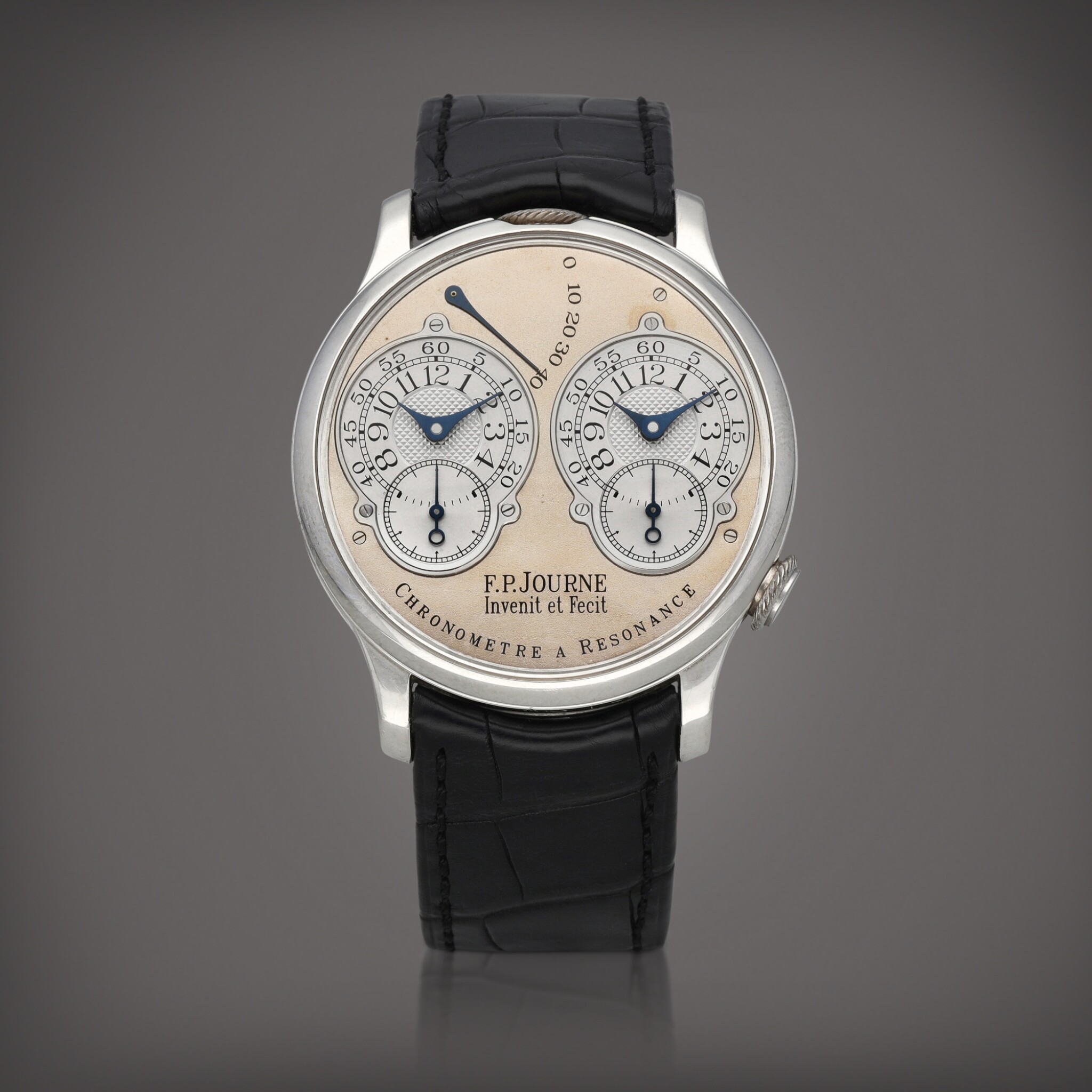 MVT: is running at the time of cataloging.

CASE: is in good and attractive condition. It presents some minor scratches throughout. There are some fine scratches on the bezel at o'clock. There is a minor ding on the left band. The lugs present some very minor scratches and dings.

DIAL: is in good condition. The subsidiary dials present some minute dust particles. There is some minor loss at the bottom of the 'M' in 'Chronomètre'.

When many think of Francois-Paul Journe they immediately think of the Chronometre a Resonance. It is arguably Journe’s most iconic and recognisable timepiece, the quintessence of his craftmanship both aesthetically and technically.

As a timepiece it embodies many of the fundamental elements that make the world of horology so alluring a place. It has history, a story behind how and why it was created; it has an unparalleled aesthetics inspired by some of world’s best watchmakers though, at the same time, original and true to Journe’s personal vision; and within, working largely unseen, is the movement. A mechanical marvel again founded in horological history and bought to life by Journe’s incomparable skill, style and finesse.

Resonance, the phenomenon, in short refers to when components placed within close proximity and enclosed in the same space synchronise in their movements and attain greater accuracy. It was first observed in pendulum clocks by Dutch physicist Christiaan Huygens in 1665 and refined by Abraham-Louis Breguet, the following Century, in pocket watch movements. It was in 1994 that Journe began developing a wristwatch that utilised resonance, a watch that would take him four years to complete.

This is not, however, the only way in which the Resonance stands ‘on the shoulders of giants’. Journe has always, and very openly, been inspired by the works of Breguet and Daniels and his skill and ingenuity certainly echoes them. In his aesthetic too one can see comparisons. His dials are avant-garde, yet retain a simplicity and an elegance. His use of textures; the juxtaposition between a solid ground, brushed finishes and guilloche are reminiscent of both Breguet and Daniels, and yet, and most importantly, remain unmistakably Journe.

It takes a particular confidence, a resilience, in one’s own skill and one’s own passions to create something so new and exciting in the shadow of figures such as Daniels and Breguet. A lesser watchmaker would be swallowed up by the foundations upon which Journe has built. He is guided by history, inspired by greatness, but never trespasses into plagiarism. His survival and success, though he would undoubtedly be reluctant to admit it, owes really to one thing: he never copies the greats. He is one.

Journe officially launched the Resonance in 2000 with a series of twenty pieces. Known as his Souscription production, they were numbered 1 to 20 and suffixed /00R for 2000, the year in which they were made and cased. They are powered by a rhodium plated brass movement cal. 1499 a feature that Journe replaced for 18k gold in 2003/2004. As such it is estimated that fewer than 2000 pieces were made with these early brass movements. They also exhibit a thinner font used for the power reserve indication and two-tone subsidiary dials.

Something that has only relatively recently come to light in some collectors’ circles is that the Souscription production does not represent the very first pieces created, despite being numbered 1 to 20. Indeed, two identifiable Resonance productions exist that predate the Souscription. The pre-Souscription series totals approximately 30 pieces and differs in one key respect: while they are suffixed -00R similarly to the Souscription watches, the engraving to the case back is shallow and done by hand, whereas on the Souscripton models it appears thicker due to the adoption of laser engraving.

This watch, lot 65, however is rarer still. The newly identified pre-production series, to which this watch belongs, is one of only approximately only 10 pieces and represents the very first Resonance watches ever made. These pieces were exceptionally fitted into cases produced in 1999 - the same year as the official launch of the F.P. Journe brand. They also share many of the same distinguishing characteristics of the pre-Souscription and Souscription examples. The pre-production Resonance, however, were suffixed /99R and start at number 21/99R due to the fact that numbers one through twenty were already reserved for the Souscription production. On this basis we can confirm the present lot engraved 028/99R as the 8th Resonance ever to leave Journe’s workshops and likely made at the hands of Journe himself.

One of the most important components of any watch is its dial. The dial is the portal through which wearer interacts with what they are wearing, a watch’s first impression. And it can be argued few watches give a better first impression than the Resonance. A feature that early Journe dials share is the way in which they are finished. Early examples feature what is best described as a ‘shimmer’ dial, possessing an almost granulated effect that plays with the light in a very particular way. This is believed to be due to the fact the dials were hand finished, a process which, as with the engraving, changed as the model evolved.

The present lot is fitted with an early white gold ‘shimmer’ dial, and though we can assume that the 10 pre-production models were available with yellow, pink and white gold dials, this is the only example with a white gold dial known thus far.

Offered fresh to the market, having never been seen at auction before this exceptionally rare Resonance is in fabulous condition and comes complete with its full suite of accessories. Watches from the pre-production virtually never appear for sale so this opportunity not one to be missed by any collector interested in obtaining one of the most important Resonances, indeed one of the most important Journe watches, to be made. It is a watch that defines its watchmaker and one that will only become more important with the passing of time.

We would like to make special mention to Osama Sendi for his help and kind sharing of knowledge and A Collected Man and SJX for their prior research and articles on Journe and early Journe watches.