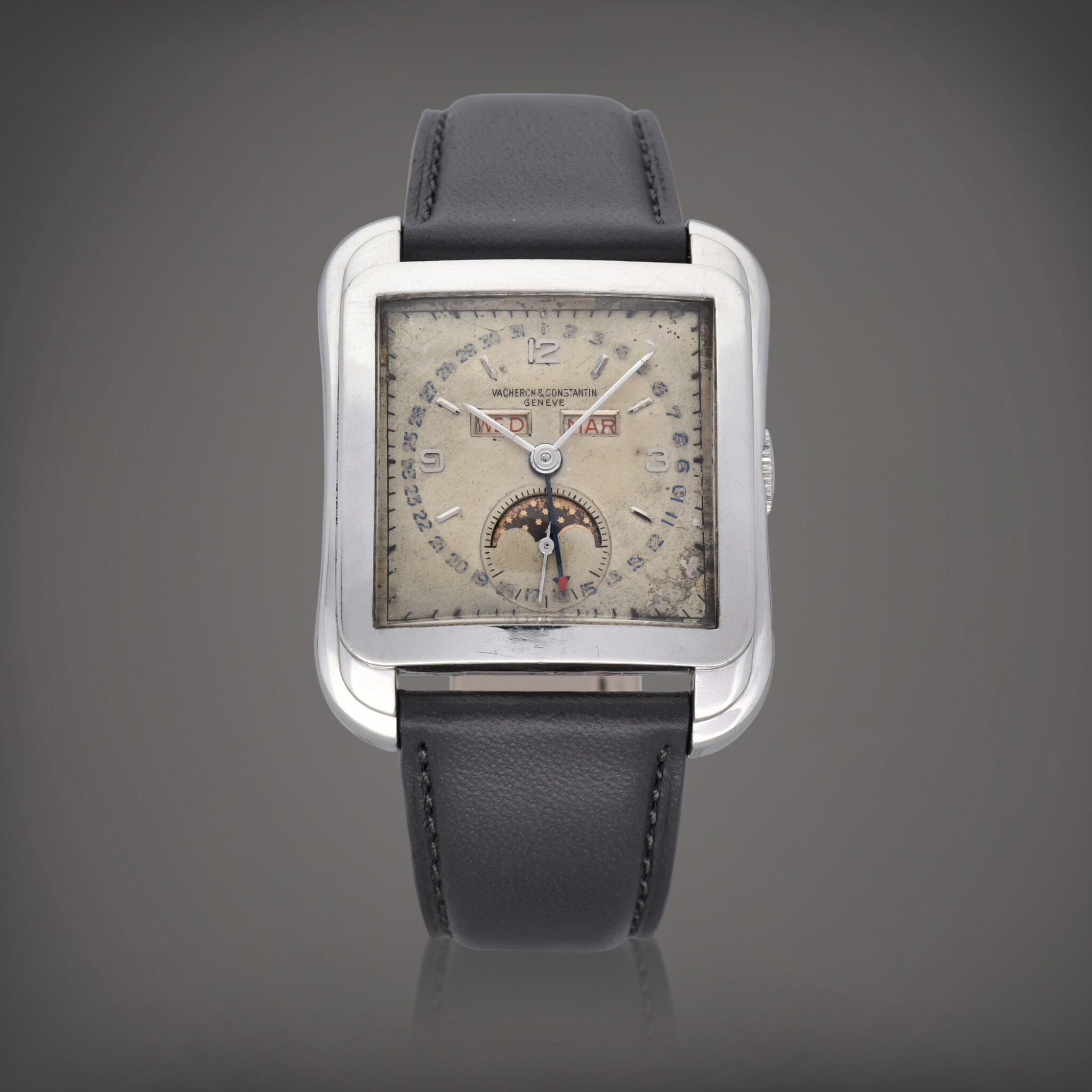 MVT: is running at the time of cataloging. The calendar and moon phases are advancing.

CASE: is in overall good and honest condition retaining its original proportions. The case presents some wear consistent with its age with some minor scratches and minute dings. The case back presents some surface scratches throughout.

DIAL:is in attractive and original condition. It presents some signs of aging with some minor spots and light discoloration. Some of the date indexes and a part of the signature have partially faded. The date hand has partially lost some of the red paint at the tip. The moon phase disc has a subtle color loss on the edges.

Please note this lot is accompanied by a Tortella & Sons passport which includes research and illustration of the following watch.

The 1950s were foremost marked by the Post World War II Boom. New consumer goods such as cars, televisions and refrigerators became available to more people than ever before. The booming prosperity originated new music genres such as Rock ’n Roll, and in industrial design bright primary and secondary colours became fashionable. In Europe the Mid-20th century saw the birth of the unification process and in Great Britain, Elizabeth II ascended the throne and became Queen of the United Kingdom and the Commonwealth.

In those times the mechanical wristwatch was a delicate and precious object that asked for special and precocious care. It is in that context that Vacheron Constantin in 1951 created the reference 4737, which Italian collectors nicknamed ‘Cioccolatone’, as its shape is reminiscent of a square of Swiss chocolate. Its design was radical and broke with the aesthetic codes of the time. Concurrently, rectangular and square (through its dial opening), the case additionally is curved to better fit on the wrist. Above all, its impressive size (36mm width and 43mm length) made it stand out from all other watches on the market.

Soon after the “time only” model, the spectacular complete calendar with the display of the moon phases was introduced. Excitedly original and daring, reference 4764 was to become one of Vacheron Constantin’s most sought-after models by collectors, equally for its unique aesthetic and rareness. To the best of our knowledge, in total less than 50 pieces were finally produced until 1957.

The ‘Cioccolatone’ hence became a success with connoisseurs and collectors. Nevertheless, its production remained very limited. In fact, all versions combined less than 650 pieces left the Vacheron Constantin workshops between 1951 and 1969. Six versions of the ‘Cioccolatone’ will see the light of day:

Later, the celebrated ‘Cioccolatone’ was several times revisited in different variations and sizes:

The present platinum version of reference 4764 is to date the one and only piece referenced in the archives of Vacheron Constantin. It was sold in Athens, Greece in 1957 and it is fresh to the market, hence the first time in auction. This unique piece impresses by its sheer presence and strong proportions. It is furthermore offered with its original unrestored dial and a Vacheron Constantin Certificate of Authenticity. Without a doubt, this might be the only occasion for passionate Collectors to obtain such a historically significant timepiece as a second opportunity might not appear so quickly again... if ever.

We would like to thank the Vacheron Constantin Heritage Department for their support with the research on this piece.