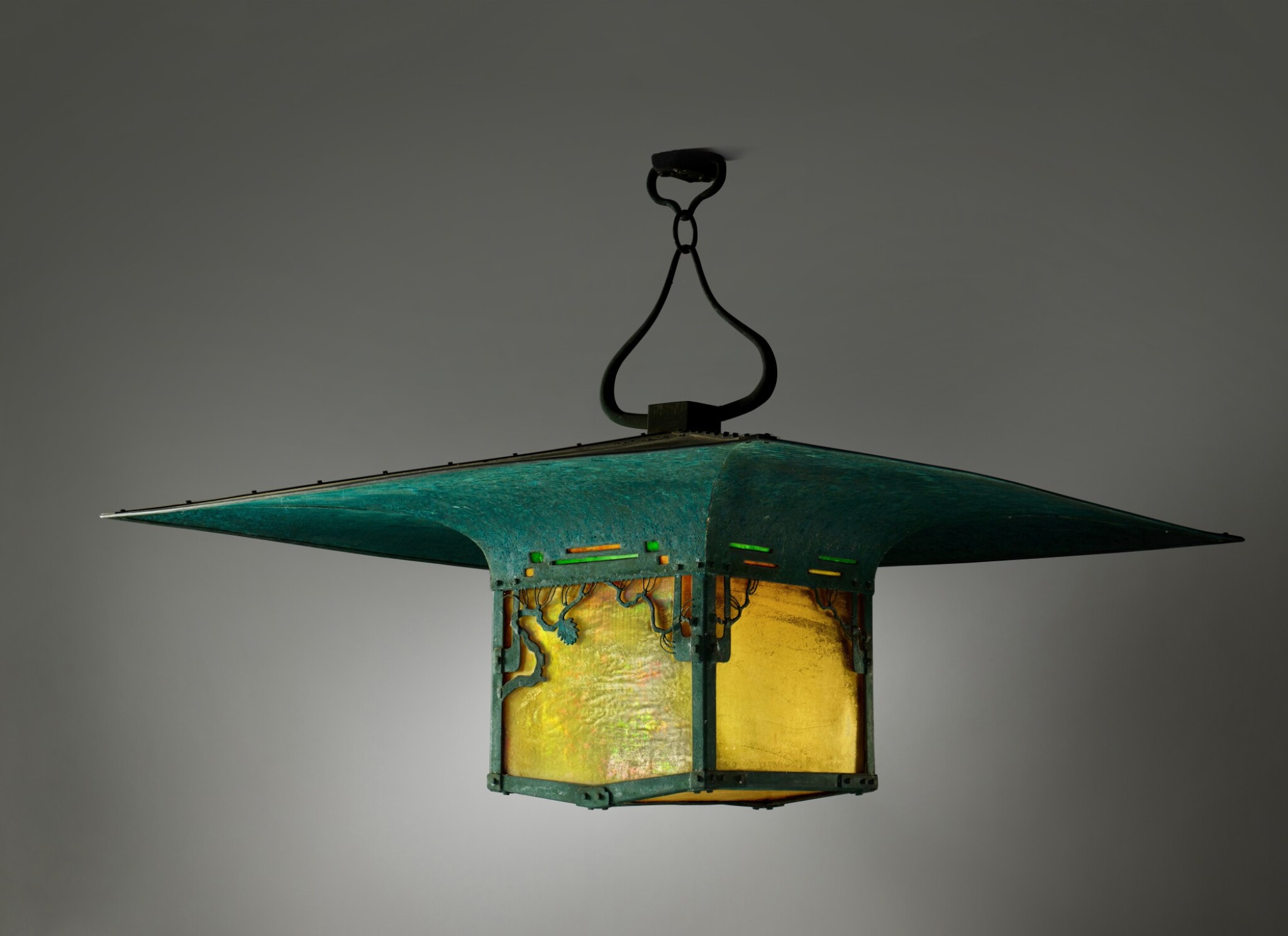 Overall in very good condition. When viewed firsthand, this extraordinary lantern from one of Greene & Greene’s most celebrated commissions exhibits impressive scale and sculptural presence. The lantern displays a rich green patina that beautifully complements the amber yellow and emerald green iridized glass panels. The patinated metal throughout presents with scattered surface scratches, minor abrasions, discolorations, oxidation, verdigris and surface soiling consistent with age, outdoor use and the natural evolution of the material. The upper canopy of the lantern presents with more concentrated wear to the patina and areas of verdigris, consistent with age and outdoor use and not visually distracting when the lantern is installed. The decorative conifer branch and pinecone motifs are in very well-preserved condition and add wonderful dimension to the lantern. All of the iridized glass panels appear original and undisturbed and are in very well-preserved condition. The glass with very minor scattered air bubbles, particulate inclusions and surface irregularities inherent to the medium and its production. The glass presents with extremely minor and fine surface scratches, consistent with age and gentle handling. One green border tile in the upper register presents with a very fine hairline crack measuring approximately ½ inch, stable. One yellow border tile with a very small trace of adhesive residue, only visible upon close inspection. The glass with surface soiling and minor areas of discoloration particularly concentrated to the contours adjacent to the metal, not visually distracting. The interior of the lantern with light surface soiling and minor trapped debris, consistent with age and outdoor use.  A magnificent and complex example of Greene & Greene lighting displaying outstanding scale, form and line.  The lantern presents beautifully with incredible visual and sculptural presence, and is a dazzling object when seen under remitted and reflected light conditions. Sotheby’s does not guarantee electrical components and recommends having all wiring inspected by a licensed electrician.

The ‘Significance and Beauty’ of an Unassuming Masterwork:

The Unique Monumental Lantern for the Robert R. Blacker House

﻿Charles Sumner Greene (1868-1957) and Henry Mather Greene (1870-1954) were the most important residential architects working in Southern California during the first decade of the twentieth century. Their revolutionary approach to the bungalow style popular in Pasadena expanded the boundaries of American domestic architecture. They employed unusual materials and novel structural techniques with a singular vision for synthesizing wood, glass, glazed ceramic tiles, and various metals.

Many aspects of the 12,000-square-foot residence designed for Robert R. Blacker, a lumber baron, are special among the masterworks of Greene & Greene. Built on a seven-acre site, it is the largest bungalow-style residence they designed. The scale, construction, and use of exceptional materials of this residence place it alongside the David B. Gamble House as their most robustly designed and exquisitely executed homes. Architecture critic H. C. White, writing in the Architect and Engineer of California, pronounced the residence “the best example” of the architects’ work.

One distinctive feature of the Blacker House is its masterful system of exterior lanterns, which illuminated the hospitable breadth of porches, sleeping balconies, and the elaborate pergola and gardens surrounding rear of the house. The most prominent position on the house is the prow of the porte cochere that extended over the driveway and onto the front lawn. For this prime location, the architects designed the present unique monumental lantern. This lantern shimmered like a jewel and gently spread light out onto the grass. It was distinctive in numerous ways. The typical lantern that hung from the exterior of the house had a 27″ × 27″ hood; the monumental lantern has a broader canopy that measures 48″ × 48″, creating a soaring effect.

The motifs that connected the exterior lighting to the Gesamtkunstwerk of the residence included stylized naturalistic ornamentation, such as the conifer branches silhouetted against of the lantern glass, and it appears that only the largest lantern also featured pinecones. Its dramatically broad hipped roof echoes the house’s subtly sloped roof lines. According to design scholar Nina Gray, “the sloping roofs of these lanterns—especially the largest form—are constructed with an inward curve on their underside, lending them a particularly graceful profile.”

The residence and its features were praised as “worth studying both for the practical points in its construction and the aesthetic qualities of the whole” in The Craftsman in 1912. The writer extolled the residence’s profound horizontality—exemplified in the present lantern—including the “wide overhang of the roofs, the angles of which are so restful and well balanced.” The same confident overhang and carefully resolved angles give the lantern a character perfectly matched to its privileged place on the residence. The dramatic silhouette, stylized ornamentation, brilliant color, texture, iridescence, and overall effect of the monumental lantern exemplify the architects’ unique vision.