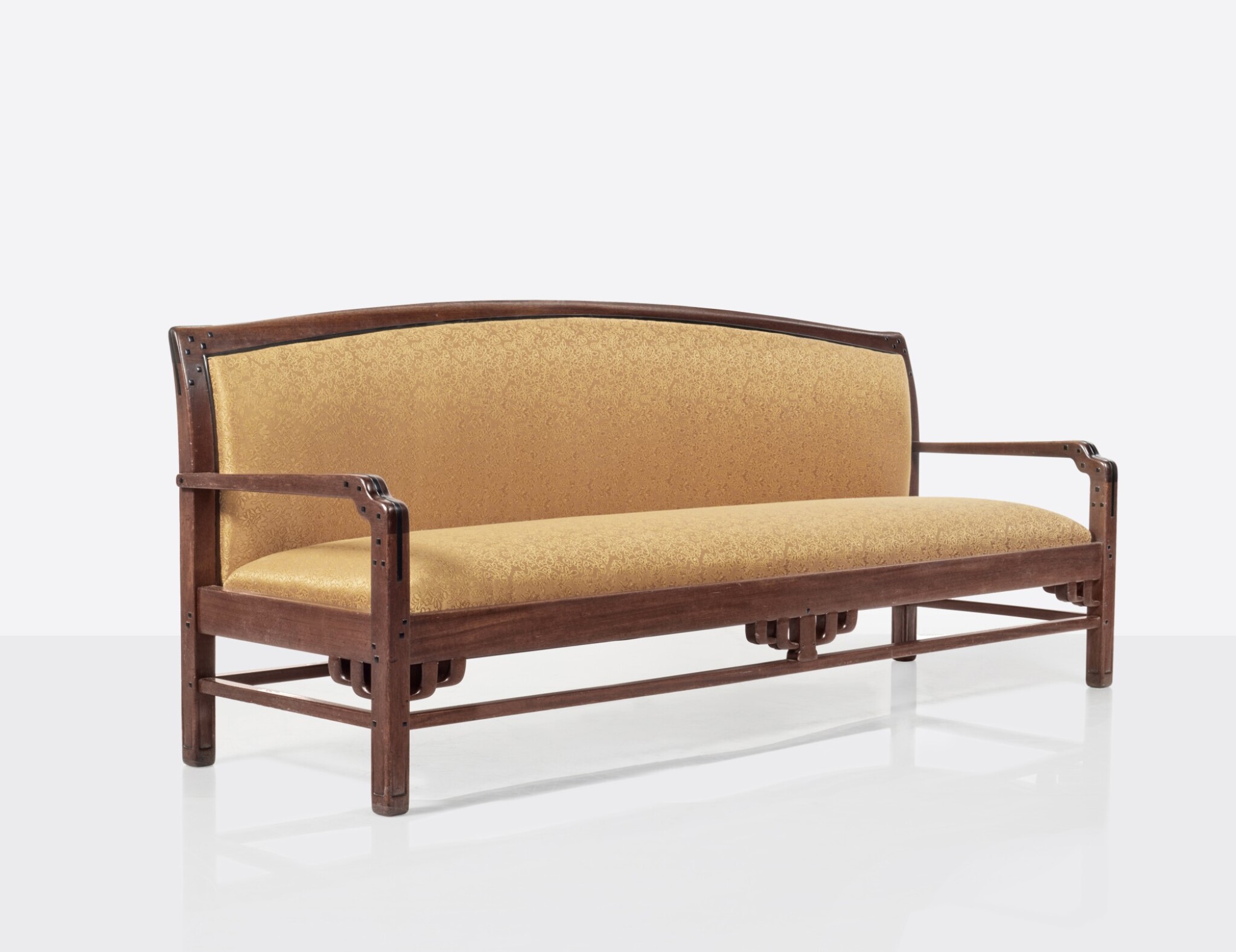 executed in the workshop of Peter Hall, Pasadena, CA

Overall in very good condition. The mahogany surfaces appear to retain their original finish throughout, displaying a warm russet brown coloration complemented by dark ebony inlays. The wood surfaces present with occasional scattered surface scratches, minor abrasions and light surface wear throughout consistent with age and gentle use. The armrests, crest rail and legs present with slightly more concentrated wear to the edges consistent with gentle use.  The crest rail presents with a shallow horizontal indentation to the wood measuring approximately 5 ¾ inch long, not visually distracting.  The lower rail presents with a very small chip to the central decorative element measuring approximately ⅛ inch, not visually distracting. The sofa has recently been reupholstered in an elegant ochre-yellow silk fabric in keeping with the sofa’s original upholstery treatment which is in excellent condition overall.  With two matching accompanying pillows in the same fabric.  A masterpiece of design from one of Greene & Greene’s most illustrious commissions, displaying outstanding proportion, elegant lines and superlative craftsmanship.

Sitting on a Cloud: A Couch from the Blacker House by Greene and Greene

It’s a little-known but revealing fact that the word bungalow is etymologically derived from Bengal, the region in India. When the term entered the English language, in the seventeenth century, it was not meant as a compliment. Traders associated with the East India Company, whose first mercantile beachhead in the country had been established in the Bay of Bengal, used it as a term of derision about the standard of housing they found there.

Ironic indeed, then, that three centuries later, the word bungalow would be applied to the single greatest residential building on the West Coast of America: the Robert R. Blacker House, built in 1907. Architecturally speaking, of course, this most ultimate of Greene and Greene’s “ultimate bungalows” is a far cry from the dwellings of historic Bengal. The only real connection is the use of the veranda (another Hindi word), a liminal space between the interior and exterior, perfectly suited to the climates of both eastern India and southern California.

Etymological vagaries aside, however, Greene and Greene’s Pasadena masterpiece does indeed connect to a geographically expansive history. While Arts and Crafts practitioners like Gustav Stickley imaginatively reprised medieval Europe, they were looking to the design history of the Far East. Not since the high-water mark of the East India Company, in fact – when the likes of Thomas Chippendale were indulging in fantasias of chinoiserie – had Asian furniture been so successfully incorporated into a new design language.

As for Chippendale, it was China and Japan, rather than India, that fired the Greenes’ imagination. Witness the present, extraordinarily beautiful sofa, the more elaborate of two that were made for the Blackers’ living room. The other sofa is now in the collection of the Museum of the American Arts & Crafts Movement. The sofa’s long, low, and elegant proportions suggest those of a Chinese couch – the product of a people that mostly sat on the floor, elevating themselves by a few inches only to signal a rise in status.

The detailing of the Blacker House sofa is inexpressibly fine: at the top, a long arcing crest rail; to the sides, sculpted arms that unexpectedly ripple down at the front, all the better to rest one’s hands; at the bottom, stretchers racing straight along all four sides, underlining the whole composition. Most striking, perhaps, is the inventive variation on the “cloud” motifs that are often carved into the joints of Chinese furniture. The Greenes reimagined this feature as symmetrical pairs of volutes, curving into the piece’s upright posts like double parentheses.

Comparison of the sofa to the slightly earlier, monumental settles of Stickley – the only major seating pieces of the period that are qualitatively comparable– is instructive. Instead of massive white oak, a material with strong cultural associations to Englishness, the Greenes specified slender pieces of exotic Honduras mahogany, with ebony pegs anchoring the tenons. (When Robert Blacker commissioned the house, he had only recently retired from the lumber trade, and this may have encouraged the use of imported timbers throughout the house.) Rather than the sheltering containment offered by the Stickley settle, the Greene and Greene sofa opens itself on to the horizontal expanse of the house. Positioned at one end of the living room, it served as a sort of viewing platform, yielding a vantage on the domestic scene, and the space’s other glorious furnishings. (These included a spectacular sculptural light, which is shown alongside the sofa at Sotheby’s this month.)

In so many respects, this masterwork captures the essence of the Blacker House, and the oeuvre of Greene and Greene as a whole. Theirs was a syncretic aesthetic, drawing on design’s global dimensions without ever falling into caricatured exoticism. Somehow, three years before the first film was shot in Los Angeles (D. W. Griffith’s two-reeler In Old California), and three decades before Hollywood would establish itself as the whole world’s dream factory, Greene and Greene already intuited what art on the Pacific Rim could look like. No one since has done it better.