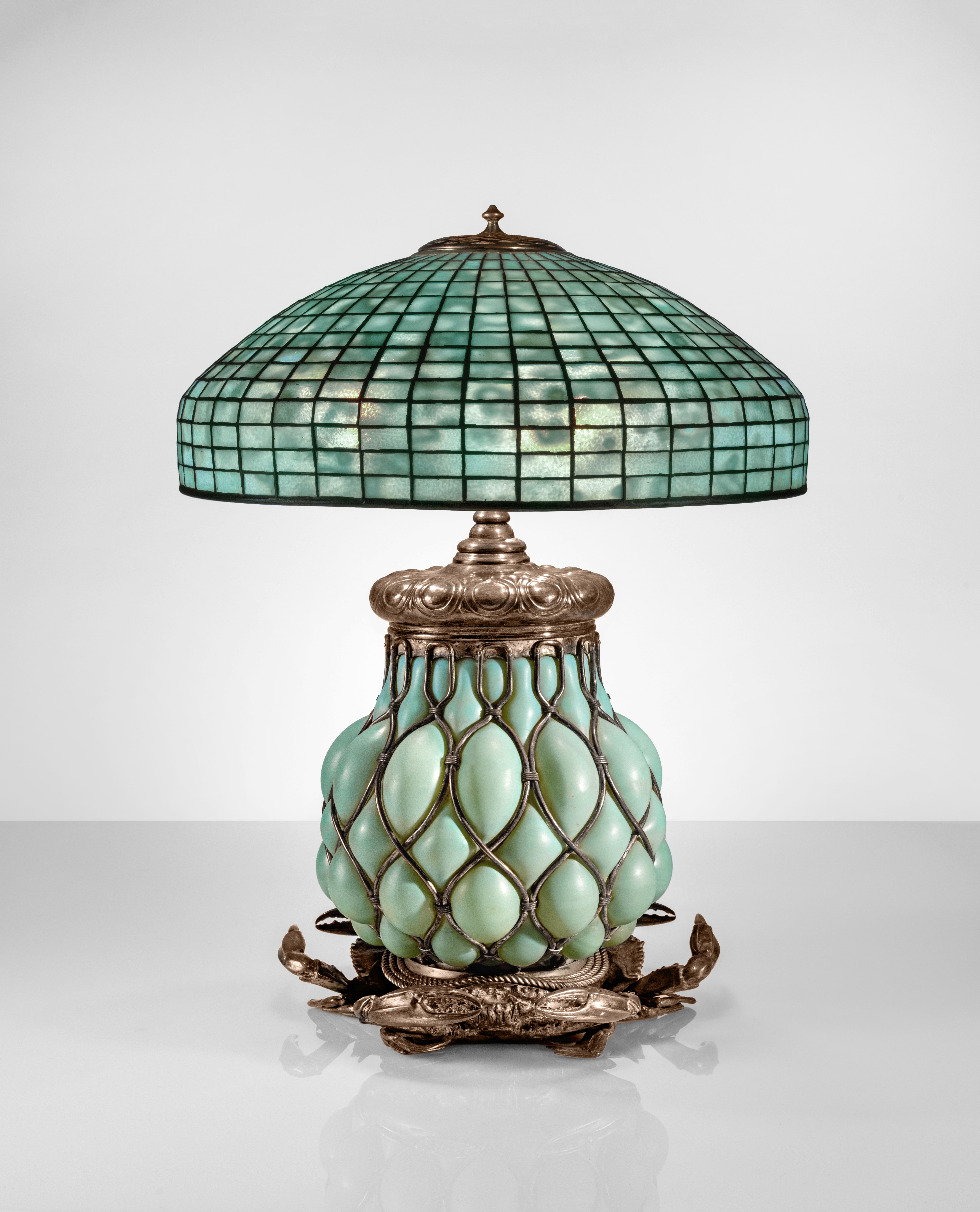 with a rare reticulated blown-glass "Crab" base

Overall in very good condition.  By all accounts, the present lamp presents an original unit from the period, as evidenced by all of the components retaining their original silvered-bronze finish, including the shade leading, bronze base elements, riser, socket cluster and finial. When viewed firsthand the shade displays a warm blue-gray hue which is slightly less saturated than illustrated in the catalogue photography and beautifully complements the coloration of the blown glass in the reticulated “Crab” base.  The vigorously mottled glass selection imparts the shade with strong visual depth. The shade with approximately 10 hairlines dispersed throughout, stable. The shade with some very minor traces of surface soiling concentrated to the contours adjacent to the lead lines, consistent with age. The rare "Crab" base is in remarkable original condition. The opalescent favrile glass blown through the base appears original and undisturbed, showing no visible condition issues. One section of the favrile glass presents with a small area that is slightly lighter in color where the glass was blown thinner than the rest of the glass, inherent to production and not visually distracting. The favrile glass with a few very light surface scratches and with a few small traces of surface residue concentrated to the contours adjacent to the bronze reticulations. The silvered bronze elements are in very good condition with scattered minor surface scratches, wear, abrasions and discolorations, consistent with age and gentle handling. The silvered bronze with some occasional oxidation spots and traces of surface soiling particularly concentrated to the crabs and recessed contours of the design. With period sockets and a period finial. A spectacular and early lamp exemplifying the extraordinary artistry and workmanship of Tiffany Studios.  This lamp presents beautifully when viewed in person and is a very sophisticated and captivating object.

Americans began to reinterpret the means of illuminating the interior of their homes with the discovery of oil in Pennsylvania in 1859 and as the electrification of the country intensified in the late 19th century. Most interior decorators and lamp manufacturers slowly recognized the potential market and were gradually inspired to create artistic lighting that would appeal to the general public. A critic in 1899 commented: “Recently a revulsion has set in and very lately lighting as a fine art has been studied by the few for, even yet, villainous lighting is the rule, not the exception, all over the country….There seems no excuse for bad or vulgar lighting of houses any more.”

Louis Tiffany, a brilliant marketer and innovator, was at the forefront in the designing of artistic lighting fixtures. He created leaded glass wall sconces for the Blue Room of the White House in 1882, was responsible two years later for the lighting fixtures in the Lyceum Theater, the first theater ever to be lit entirely by electricity, and an enormous electrolier was a noted attraction in the Tiffany Glass and Decorating Company’s Chapel at the 1893 Columbian Exposition in Chicago. Siegfried Bing, an early supporter and retailer of glass objects produced by Louis Tiffany’s firms, noted in 1896: “Nor did the role of glass in interior decoration end with mosaic. In the form of cabochons, or other varied motifs, glass appeared in electric lighting fixtures, hanging chains, balustrades—in any place that could provide a rationale for its sparkle.”

While the preponderance of Tiffany’s lamps feature finely cast bronze bases, the earliest examples were frequently composed of his trademarked Favrile glass in combination with metal. A Tiffany Glass and Decorating Company catalog prepared for an exhibition held in 1897 at the Pratt Institute (Brooklyn, New York) proudly proclaimed: “The combinations of glass and metal in objects of art are constantly exercising the talents of workers in these materials. In no case have they been very successful except where the artists have fully appreciated the beauty and the possibilities of both materials, and have paid a due regard to the laws of controlling harmony and contrast….Tiffany Favrile Glass particularly lends itself to artistic effects in union with metal....” The lamp offered here, with its crab base, is an extraordinary example of what the company was capable of producing when combining these two mediums.

The base apparently made its first appearance in Milwaukee in 1898, where a Mrs. Chapman was said to have owned a Tiffany fixture with an iridescent glass shade on a lamp “supported on the back of crabs.” The model, “a portable oil lamp in silver plate and glass with crab feet,” was included in the famous 1899 exhibition of L’Art Nouveau organized by Bing for the Grafton Galleries in London and was possibly forwarded, as were many of the pieces in that display, to the 1900 Paris Exposition. That same year the company illustrated the base in a sales catalog and offered it as: “No. 289—READING LAMP—(Oil or Electric) (Crab Design)—29 in. high to top of shade. Base of bronze and wire work with ‘Favrile Glass’ blown inside.” Priced at $115 and available with either green glass and patinated bronze or white glass and silvered bronze, it is readily apparent why it was the most expensive base in the catalog.

The reticulated silvered bronze body, enclosing an electrified canister cast with a band of ovals, is attached to an upper scalloped silver border and has a framework of alternating bands of ovals and diamonds into which opalescent white glass was blown and expanded. The body, supported on a circular mount bordered by three bands of silvered bronze undulating twisted ropes, is raised on the backs of three beautifully cast silvered crabs with their menacing claws extended. The geometric shade, although simple in design, includes sections of dichroic glass and is a superbly harmonious complement to the base.