Property of an Arizona Private Collector 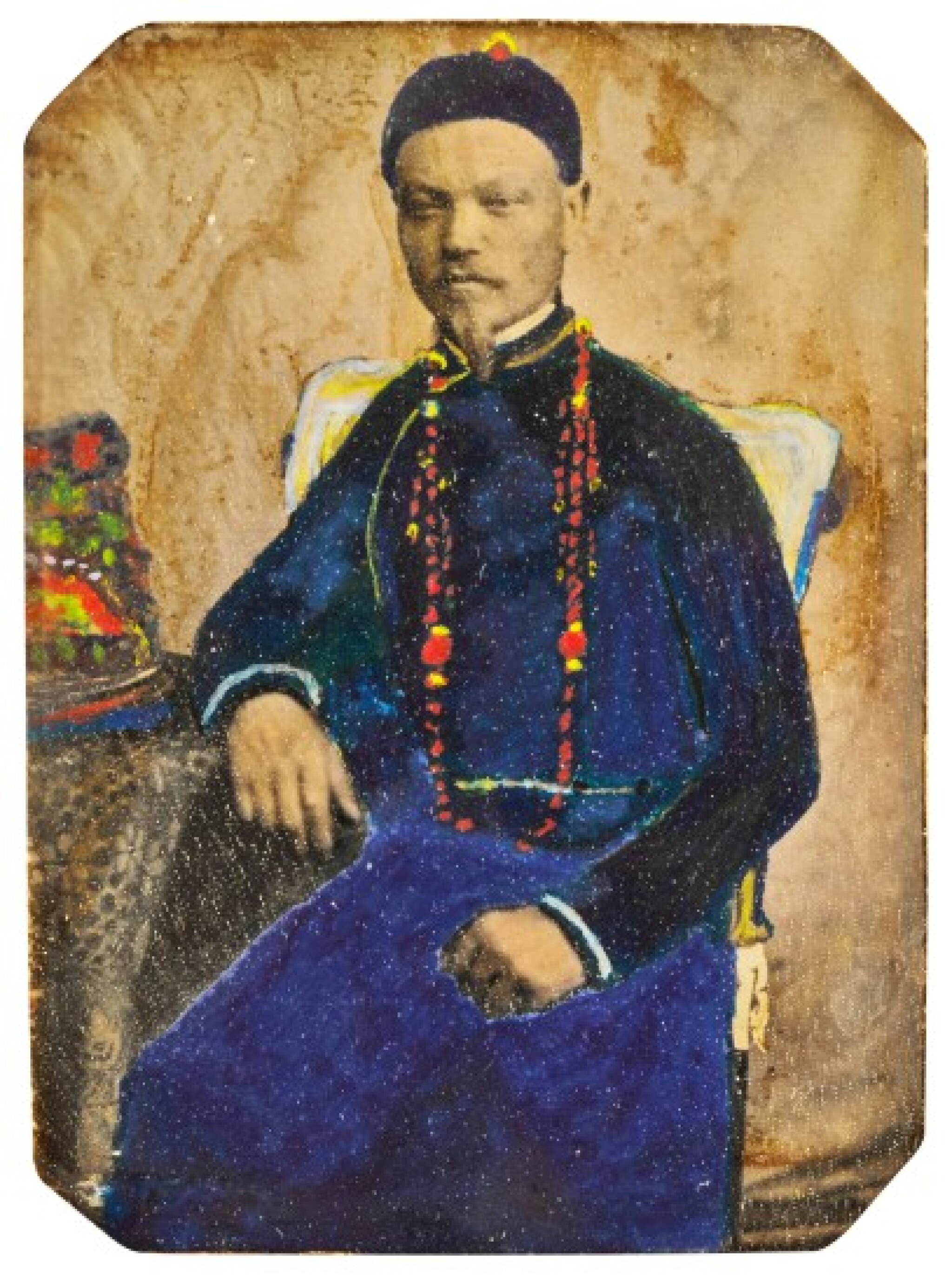 Property of an Arizona Private Collector

Please note the colors and shades in the online catalogue illustration may vary depending on screen settings.

This daguerreotype conveys an exceptional level of detail and the hand-applied pigment retains vibrant and saturated. The sitter’s facial features and both hands are expertly rendered and subtle detail can be seen in the eyes and beard. Brilliant hand-coloring in royal blue, crimson, gold, and white tones have been applied to the sitter’s robe, hat, and beaded jewelry, as well as the side table and chair.

When examined closely in raking light, some faint, fine scratches and pitting are barely visible on the plate. Age-appropriate mild tarnish is primarily visible around the edges of the gold mat and in a subtle half-oval around the upper half of the figure. While the aforementioned bear mentioning, they do not distract nor detract from this dramatic and important early daguerreotype portrait.

The photographer’s letterpress studio leaf is behind the daguerreotype plate and the whole sealed with a brass preserver. There are copious inscriptions in French, English, and Chinese in a number of hands in pencil and ink, as well as ‘DAGUERREOTYPE / LAI CHONG / PHOTOGRAPHER / SHANGHAI-KULING’ in letterpress.

The tooled leather case is detached at the spine. The lid is lined with vermillion-colored silk that is soiled in a subtle oval shape that corresponds to the tarnish.

The unique hand-painted daguerreotype offered here is the earliest known dated photograph by a Chinese photographer. Hidden behind the plate is a leaflet fragment with ‘Daguerreotype. From Lai Chong. Photographer. Shanghai-Kuling’ in letterpress. “Lai Chong Zhao Xiang Hao (麗昌照相號)” is written on the reverse in Chinese. While this piece has been previously catalogued and exhibited as by a photographer named Lai Chong, it is now believed that the name refers instead to a Chinese-run photographic studio. Extensive notations in several hands identify the sitter as Prince Sengge Linqin (Sengge Rinchen / Senggelinqin) (1811-1865), a Mongol nobleman who served as the yellow bannerman under the Qing dynasty and commanded the Chinese forces during the Second Opium War. Taken in August 1853 when photography was in its infancy in China, this daguerreotype is a landmark in the history of photography in this region.

Very little is known about photographer Lai Chong. Due to the prohibitively high cost of establishing a photographic studio, as well as the tumultuous Chinese political environment in the mid-to-late 19th century, success would have been beyond the scope of ability for all but the most resourceful and skilled individuals.

The eruption of the First Opium War, a series of military engagements between Britain and the Qing Court, coincided with the invention of the daguerreotype in France in 1839. By the time the Treaty of Nanjing had been signed, ending the conflict in 1842, the daguerreotype process had undergone a series of innovations that provided greater stability and versatility, and the new technology quickly spread across the globe. The daguerreotype was the first publicly available photographic process. By their nature, daguerreotypes are unique as there is no negative. They are produced through a direct-positive process, resulting in an image on a sheet of silver-plated copper. The surface, polished to a mirror-like degree, is highly delicate.

The Treaty of Nanjing not only ceded the island of Hong Kong to the British Empire, but it also established five ‘treaty ports’ that lifted trade restrictions and bestowed privileges upon British merchants: Amoy (Xiamen), Canton (Guangzhou), Foochow (Fuzhou), Ningpo (Ningbo), and Shanghai. These areas became commercial centers for missionaries, tourists, diplomats, merchants, artists, and other opportunists who capitalized on densely populated environments. These areas also proved to be fertile ground for the spread and adaptation of photography to meet the needs and tastes of the Chinese people.

The newly established commercial zones created opportunities, but their chaotic nature contributed to a lack of historical records. There were several European and American photographers active in China by the 1850s, although they did not tend to keep residency for more than a few years before moving on to other markets. When a studio went out of business, it might be pirated by a new owner, making tracking and identification of early studios all the more difficult. Chinese-run photographic studios did not operate in any significant numbers until the early 1860s, and while Chinese photographers were no doubt plentiful by the early 1850s, their names are lost to history. Lo Yuanyou was perhaps China’s first commercial photographer, although nothing remains of his life’s work.

The present daguerreotype embodies the spirit and style of photographic portraiture during this pivotal moment in history. Eastern traditions and preferences synthesized with the influx of Western tastes and money, leading to a highly idiosyncratic form of representation. Aesthetic conventions conspicuously carried over from traditional Chinese ancestor portraiture to studio photography, including composition, poses, clothing, and furniture. Scholar Roberta Wue notes ‘“Likeness,” in particular, was a narrowly defined concept. It centered specifically on the face and had little to do with the remainder of the body…This was so commonly accepted that it was standard practice for a face specialist to paint the face alone and for the rest of the painting, including the body and background, to be painted by another artist‘ (see Roberta Wue, Essentially Chinese: The Chinese Portrait Subject in Nineteenth-Century Photography, Cambridge, 2005, p. 268). Compositionally, many early Chinese portrait photographers followed these conventions. Subjects were frequently photographed with face and body straight-forward rather than in profile, with one hand in the sitter’s lap and the other arm bent slightly.

As evidenced by the present portrait, the anti-naturalism of Ko-Lin’s clothing contrasts heavily with the realism of his facial features. The sitter’s face, purposefully left unpainted by the artist, is bright and highly detailed. Lai Chong may have applied white powder to his subject’s face; this practice was documented in the studio of Lai Afong in Hong Kong a few years later (see Wue, p. 269). This effect only serves to accentuate the contrast between Ko-Lin’s face and his highly pigmented, heavily-painted jacket.

Daguerreotype studios not only employed photographers but also painters, thereby appealing to those seeking photographs as well as customers interested in more traditional forms of portraiture in watercolor or oils. Of course, many of the artists were skilled in painting on various materials like ivory or silk, but likely also on glass, which had been fashionable by the 18th century in the port city of Canton (Guangzhou). Hand-pigmented photographs were rarely seen before the advent and proliferation of cartes-de-visite studios (such as the studio of Lai Afong in the latter part of the 19th century). The hand-painting in the present daguerreotype may have been done by a painter in the employ of the studio.

The cost of a photographic portrait was out of reach for most individuals and attainable for only the wealthiest sitters. This portrait was likely taken for self-promotion, either for a gift or aide-mémoire.

While no direct comparable exists for this early photograph, there are several portraits by Chinese photographers in collections dating to shortly after this photograph was taken. Two ambrotypes – photographs on glass – taken by Luo Yili (1802-1852) are held by the Chinese Photographic Society, one of which is a self-portrait. As the ambrotype process was not patented and widely disseminated until 1854, the photographs must have been made shortly after Lai Chong’s portrait of General Ko-Lin. Mathematician, cartographer and inventor Zou Boqi constructed his own camera and is known to have made photographs by the late 1840s; however, no photographs exist from that period. Zou Boqi’s self-portrait, dating from the 1860s, is in the collection of Guangzhou Museum of Art, Guangzhou.