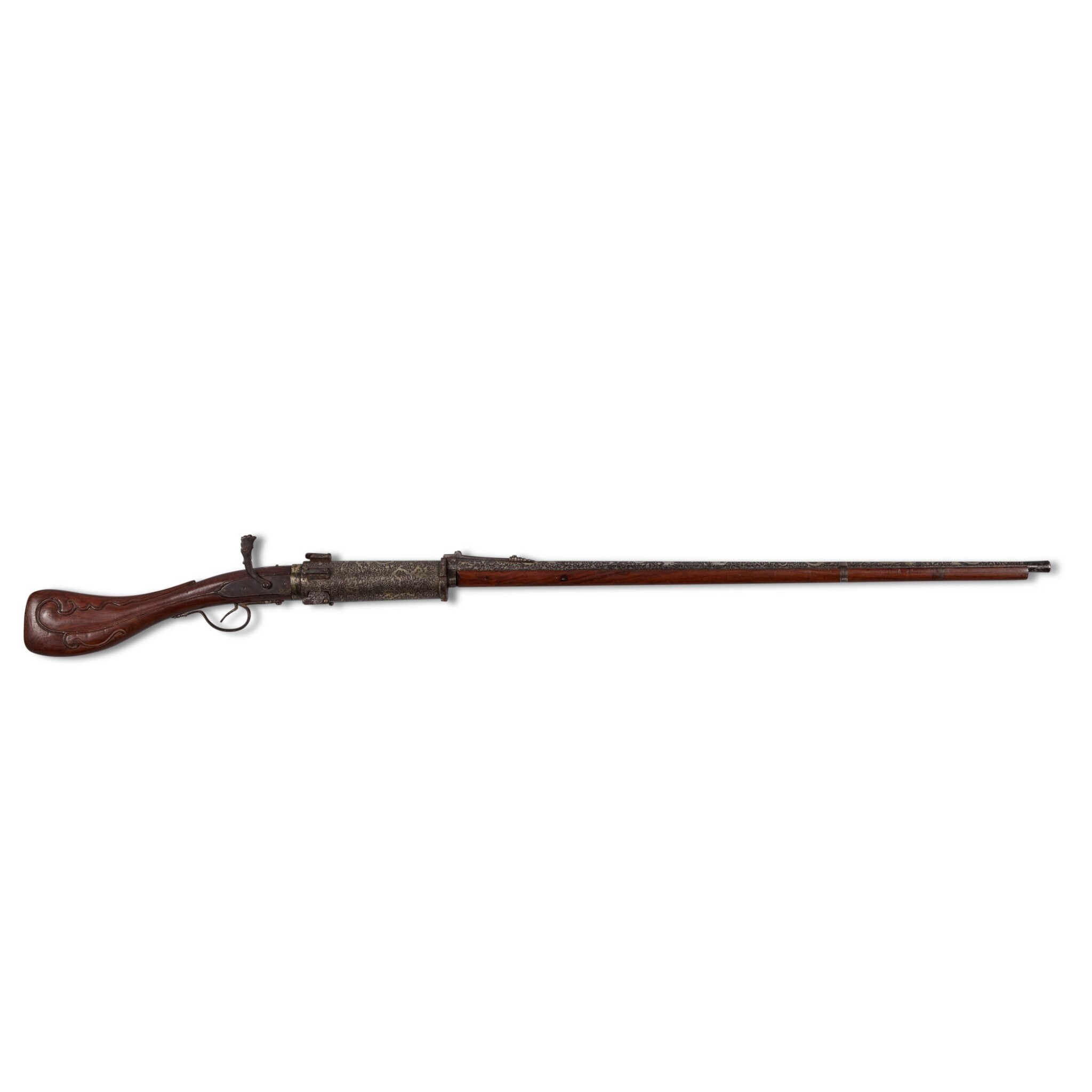 In overall good condition. Some wear and scratches. Some screws and hinges might have been replaced later. Some rust seen in crevices.

This impressive gun is exceptional for its lavish silver decoration of undulating dragons among billowing clouds interspersed with crossed vajras, running the length of its long barrel. Matchlocks, such as the present piece, were introduced into China around the early 16th century through sea and overland routes by the Europeans and Turks. With a deep interest in Western technology, the Qing emperors Kangxi (r. 1662-1722) and Qianlong (r. 1736-95) keenly encouraged the use of guns and officially adopted these weapons as regulation military equipment. Determined to keep in touch with a Manchu lifestyle, the emperors organized large-scale training hunts and prided themselves on their own shooting and riding skills.

The term 'matchlock' in firearms refers to a mechanism that allows the gunpowder to be ignited by a match cord, usually made of a slow burning rope. A matchlock gun is designed with a curved lever called 'serpentine' and a protruding flash pan connecting to the barrel to hold priming powder. Upon pulling the trigger, the serpentine clamping the lighted match cord will lower into the flash pan, igniting the priming powder causing an explosion inside the barrel to push the bullet into projectile. Before the invention of this mechanism, the operator of the firearm or an assistant had to apply the match directly to the gunpowder by hand. The matchlock mechanism was a step forward in freeing the hand of the user, which could be a substantial advantage in battle.

Revolving matchlock guns are no stranger to the Chinese tradition. Weapons of this design are known at least by the Wanli period (1573-1620). According the Shenqipu (Catalogue of weapons) written by Zhao Shizhen (1553-1611) in 1598, a special type of gun named Xuanji yihu (Revolving winged tiger) is designed with a triple-barrel that rotates after each shot triggered by the matchlock mechanism (see vol. 2, p. 29 for illustration). Another revolving gun called Wulei shenji (The weapon of five thunders) is reputedly to have been invented by the famous late Ming general Qi Jiguang (1528-1588), who was mostly known for his glorious defeats of the wokou, the Japanese pirates threatening the southern border of the Ming empire in the 16th century. The weapon is designed with five revolving barrels that can be fired consecutively using a matchlock mechanism.

Although different in form and size, there are two guns with decorations related to the present piece, both from the Qing Court Collection and still preserved in the Palace Museum, Beijing. Damascened in gold with dragons and cloud motifs, these imperial weapons are illustrated in The Complete Collection of Treasures of the Palace Museum. Armaments and Military Provisions, Hong Kong, 2008, pls 232 (a flintlock) and 233 (a matchlock).

Very few early matchlock firearms from China have appeared in the recent market. A highly important Qianlong mark and period matchlock musket with a single barrel decorated with gold, silver and copper inlay was sold in our London rooms, 9th November 2016, lot 100; and another with a carved lacquer stock, attributed to the Qianlong or Jiaqing period, was sold at Christie’s New York, 23rd March 2011, lot 1447.