Property from the Collection of Luis Virata 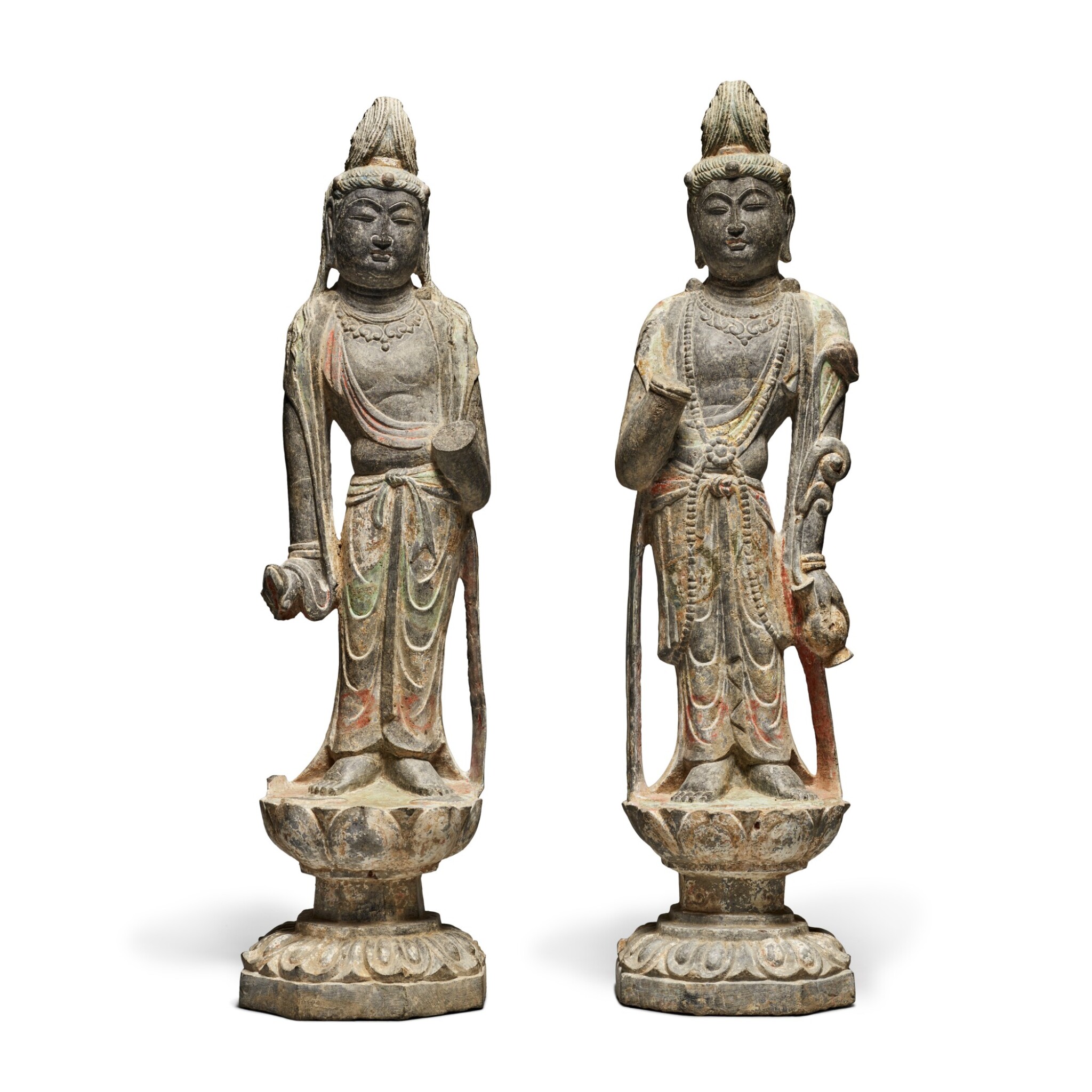 Property from the Collection of Luis Virata

An extremely rare pair of polychrome limestone figures of bodhisattvas

One figure with the right hand missing: restoration encircling the neck, with some some infill; three restored breaks to the celestial scarf to the figure's right side. The other with the left hand and wrist missing and loss to the lower half of celestial scarf and to fingers; restoration to the ankles and lower section of robe, possibly to a break. Both faces with possible sharpening of the features and polishing of surface; loss of pigments and small chips and wear throughout consistent with age and type.

Because this lot was imported into the United States after September 1, 2020, it is subject to an import tariff of 7.5% of the value declared upon entry into the United States. $75,000, plus applicable sales tax will be included on your invoice unless you instruct Sotheby's to arrange shipping of the lot to a foreign address. For more information on the import tariff, please review the Symbol Key in the back of the catalogue. If you have any questions, please contact tariffs@sothebys.com.

These two rare and exceptionally impressive sculptures embody many of the finest qualities of Tang dynasty (618-907) art. The figures are sensitively carved with slender, graceful features. They are remarkably sophisticated in their sculptural quality, their serene and compassionate faces with subtle smiles, voluminous coiffure neatly tied up in a spiral bun, bodies displayed in an elegant swaying pose, exposed torsos adorned with jewelry and scarves, and gracefully draped, thin flowing skirts. This magnificent pair of bodhisattva figures depicts heavenly beings imbued with a sense of human qualities.

From the early years of the Tang dynasty, Buddhism was supported by the Imperial court, which actively sponsored major building projects and encouraged monks to travel abroad and bring back sacred scriptures. During the reigns of Emperor Gaozong (r. 650-83) and Empress Wu Zetian (r. 684-704), many construction projects of temples in the capital and cave temples with Buddhist sculptures, most notably at the Longmen Caves outside Luoyang in Henan province, were commissioned. The monumental cave temples, created by the greatest sculptors of the day, provided an artistic language that dominated sculptural art in China and also inspired the production of free-standing figures and stelae. Buddhist images from the earlier dynasties were usually rather formal. They often appeared imposing but distant, as sculptors originally had concentrated on rendering the solemn spiritual message. However, in the early Tang a naturalistic approach in Buddhist sculpture began to develop, whereby deities appeared to be much more benevolent and approachable. This started the full transformation towards a delightfully beautiful, sensuous naturalism in Buddhist imagery, where the religious message was delivered through a very accessible form of human beauty. Previously often depicted as either male or else genderless, bodhisattvas were now rendered with a distinctive feminine beauty. Following the move towards a more gracious, human form of representation, the present pair is marked by their slender bodies, fleshy features and elegant pose, displaying a sophistication and attention to natural forms characteristic of the 8th century.

Some Longmen bodhisattvas are equally rendered as graceful beings, standing in relaxed poses, with a slight sway to the body and performing naturalistic gestures, in a style similar to that seen on the present figures; see, for example, a related pair of bodhisattvas in the Jinan Cave at Longmen, illustrated in Zhongguo meishu quanji: Diaosu bian / Complete series on Chinese art: Sculpture section, vol. 11, Shanghai, 1988, pls 173 and 174, or from the Leigutai Caves, also known as Dawanwufo Caves, ibid., pl. 183. Compare also two individual figures of bodhisattvas from the Longmen Caves, included in the exhibition Ancient Chinese Sculptural Treasures: Carvings in Stone, Kaohsiung Museum of Fine Arts, Kaohsiung, 1998, cat. nos 59 and 60. In the first years of the 8th century, Empress Wu commissioned the addition of Qibaotai, the Tower of Seven Jewels, to the temple Guangzhaisi in Chang’an, the capital of the Tang. The temple no longer exists, but some thirty stone stelae carved in high relief are preserved from the interior of the Qibaotai, which are executed in a style related to the present sculptures. They are illustrated and discussed in Yan Juanying, Jinghua shuiyue. Zhongguo gudai meishu kaogu yu fojiao yishu de tantao / Visualizing the Miraculous World, Taipei, 2016, pp 83-112 ; some are also included in Osvald Sirén, Chinese Sculpture from the Fifth to the Fourteenth Century, London, 1925 (reprint Bangkok, 1998), pls 391-397. The stelae are partly now preserved in the Baoqing Temple in Xi’an, partly in the Tokyo National Museum, and two are in the Freer Gallery of Art, Washington, D.C.

Unlike most of these stone stelae, the present pair were conceived and carved fully in the round and meant to be free-standing. Such sculptures are prone to breakage, with only a few preserved from this period, and it is extremely rare to find a pair. Compare a similarly unusual pair of limestone figures of bodhisattvas from the early Tang dynasty, also depicting Mahasthamaprapta and Avalokiteshvara, formerly in the collections of Grenville L. Winthrop and James W. and Marilynn Alsdorf, illustrated in Sirén, op.cit., pl. 372, sold at Christie's New York, 13th-14th September 2018, lots 1123 and 1124.

Buddhism flourished during the Tang dynasty. The years of cultural and political division that accompanied dynastic changes from the fall of the Han (206 BC-AD 220) through the establishment of the Sui (581-618) and Tang dynasties, gradually led to the rise of Pure Land Buddhism. Centered around the devotion of the Buddha Amitabha, or a bodhisattva, this doctrine allowed devotees to be reborn in Sukhavati, the Western Paradise. Consequently, images of Amitabha and of bodhisattvas proliferated in this period. The present two sculptures represent two of the eight great bodhisattvas of Mahayana Buddhism: Avalokiteshvara, the Bodhisattva of Compassion, known as Guanshiyin in Chinese, and Mahasthamaprapta, the bodhisattva of Wisdom, known as Dashizhi. In the imagery of Pure Land Buddhism, which thrived in China in the 8th century, these two bodhisattvas are often presented as a pair and shown standing on either side of Amitabha, the Buddha of Infinite Light, as his divine attendants. Forming a triad known as the 'Three Sages of the West', they are the deities in charge of Sukhavati and together they oversee the Western Paradise.