Property from the De An Tang Collection 德安堂藏玉 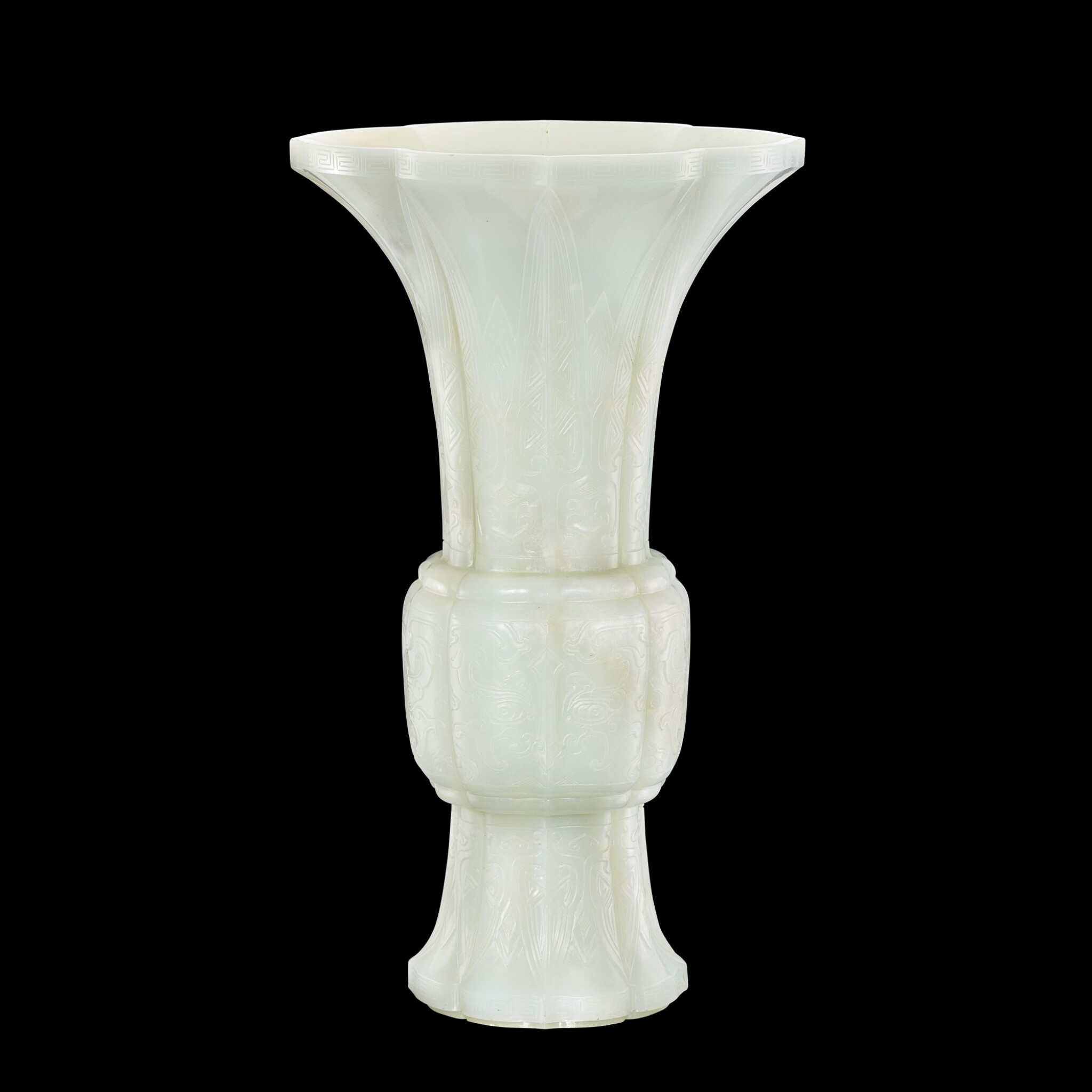 Property from the De An Tang Collection 德安堂藏玉

Property from the De An Tang Collection

The vase is in very good condition with just expected minuscule bruises and nibbles to the extremities.

A Romance with Jade: From the De An Tang Collection, Yongshougong, Palace Museum, Beijing, 2004, cat. no. 126.

Deceptively simple in its refined form and design, the present vase displays the technical prowess and artistic imagination of jade carvers during the Qianlong period. The shape and motifs draw inspiration from archaic bronze wine vessels, gu, made in the Shang (16th century-c.1046 BC) and Western Zhou (c.1046-771 BC) dynasties; the robust shape of the bronze prototype was transformed into a graceful barbed silhouette that resembles the upper view of an open flower. Deftly carved with motifs of the hallmark of the Shang and Zhou styles, the result is a vase that appears modern yet steeped in classical symbolism, skilfully adapted to suit the refined taste of the Qianlong Emperor. This magnificent vase represents one of the most graceful and successful reinterpretations of the bronze gu shape and displays the antiquarian nature that characterises jade carvings of this period.

An erudite scholar and passionate collector of antiques, the Qianlong Emperor's love for the past was grounded in his admiration for Chinese history and influenced by Confucian philosophy, which emphasised the study of history in the pursuit of virtue. The Qianlong Emperor actively influenced jade production, criticising the 'vulgar' style popular in the 18th century as excessively ornate, urging craftsmen to study antique vessels and adapt them to the jade medium. The Xiqing gujian [Catalogue of Chinese ritual bronzes], which was compiled by court artists between 1749 and 1755, and comprised line drawings of some 1500 objects in the imperial collection, was circulated among craftsmen who were encouraged to take inspiration from it.

The vase is not only remarkable for its embrace of antiquity and modernity, but also its unique incorporation of a flange at the mouth. The flange is apertured with a quatrefoil opening, mimicking the contours of the vase; the narrow opening serves a practical purpose, keeping flowers bunched close together and upright. This seemingly inconsequential design, however, substantially increased the difficulty of hollowing the vessel. It is no mean feat that the craftsman managed to hollow the vase so perfectly through the narrow opening, right down to the central bulb of the vessel. It is an ingenious but highly lavish way to fashion a jade vessel, reflecting the high standard of technical virtuosity of the jade carvers in the Imperial Workshops during the Qianlong period.