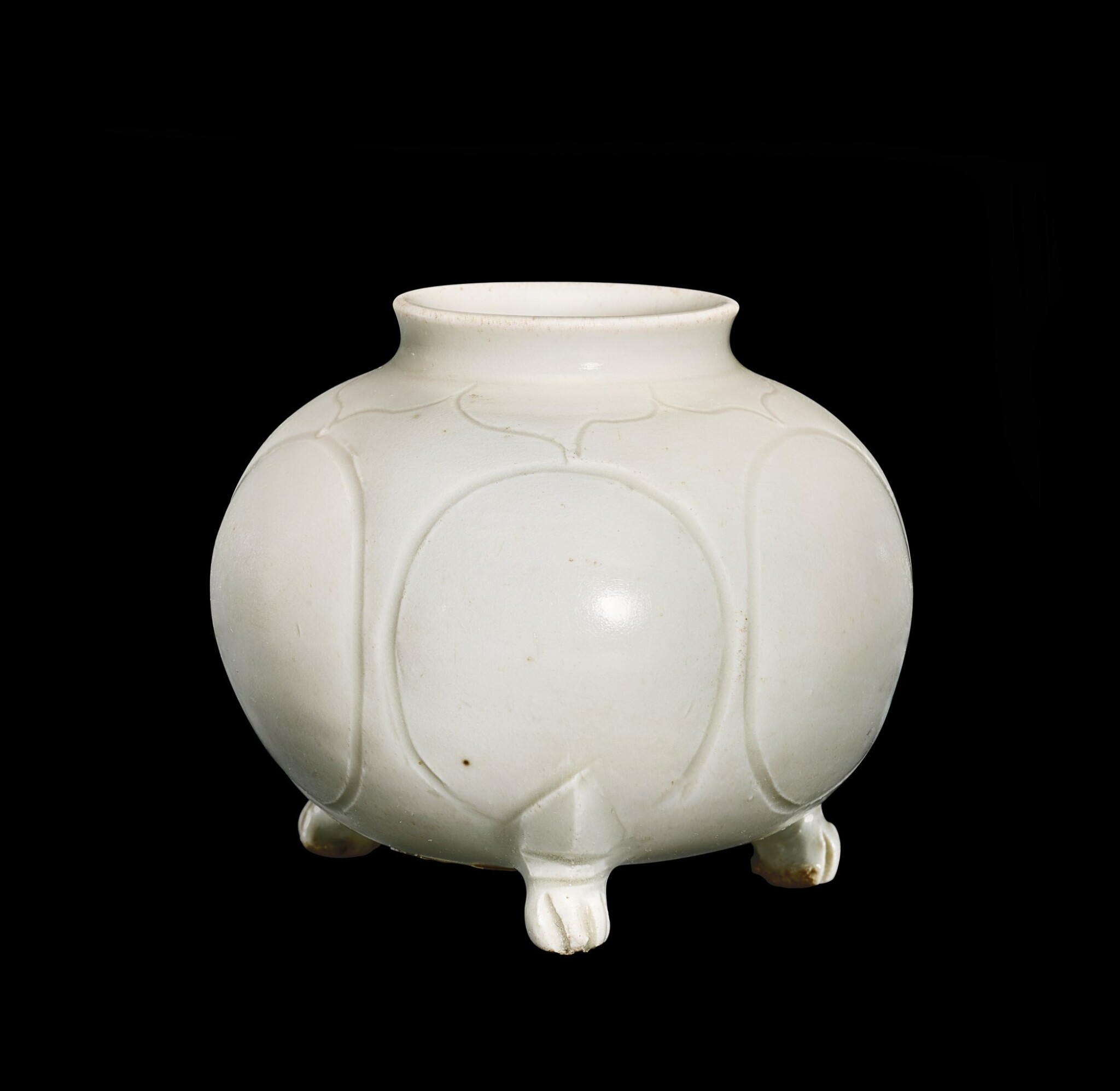 A rare Dingyao tripod waterpot with an inscribed 'guan' mark

There is expected surface wear, especially to the rim, and typical minute flakes to the tips of the feet. There is an approx. 1 cm lightly polished area to the shoulder possibly to conceal a firing imperfection. The waterpot is otherwise preserved in very good overall condition.

Delicately potted with subtle lobes resembling a lotus bud and enveloped in a warm ivory-white glaze, the present vessel epitomises the aesthetic ideal at the dawn of white-ware production. The feet, each modelled in the form of an animal’s paw, add to the charm of the vessel.

This waterpot is freely incised to its base with a guan (official) character – an indication of exceptional quality suitable for imperial use. Although white-glazed wares inscribed with such marks can be found from the Tang dynasty through the Song period, they are altogether scarce. Except for a very small number of examples from the Xing kilns, the majority of these marked wares were produced at Dingzhou (Lü Chenglong, ed., Dingyaoyaji gugongbowuyuan zhencang ji chutu dingyao ciqi huicui / Selection of Ding Ware. The Palace Museum’s Collection and Archaeological Excavation, Beijing, 2012, pp. 13 and 18). From the mid-Tang dynasty through the Five Dynasties period, while kilns supplying ceramics to the court were neither strictly controlled nor solely restricted to imperial commissions, court officials were sent to supervise production and taxation at the Ding kilns (The Decorated Porcelains of Dingzhou: White Ding Wares from the Collection of the National Palace Museum Special Exhibition, National Palace Museum, Taipei, 2014, p. 19). See a Five dynasties Dingyao covered jarlet with similar petal lobes and inscribed with a guan character, but resting on a short footring, in the collection of the Palace Museum, Beijing, published in Ceramics Gallery of the Palace Museum, vol. 1: The Neolithic Period to Five Dynasties, Beijing, 2021, cat. no. 186, together with a Tang dynasty unmarked waterpot supported on four animal-feet, cat. no. 142.