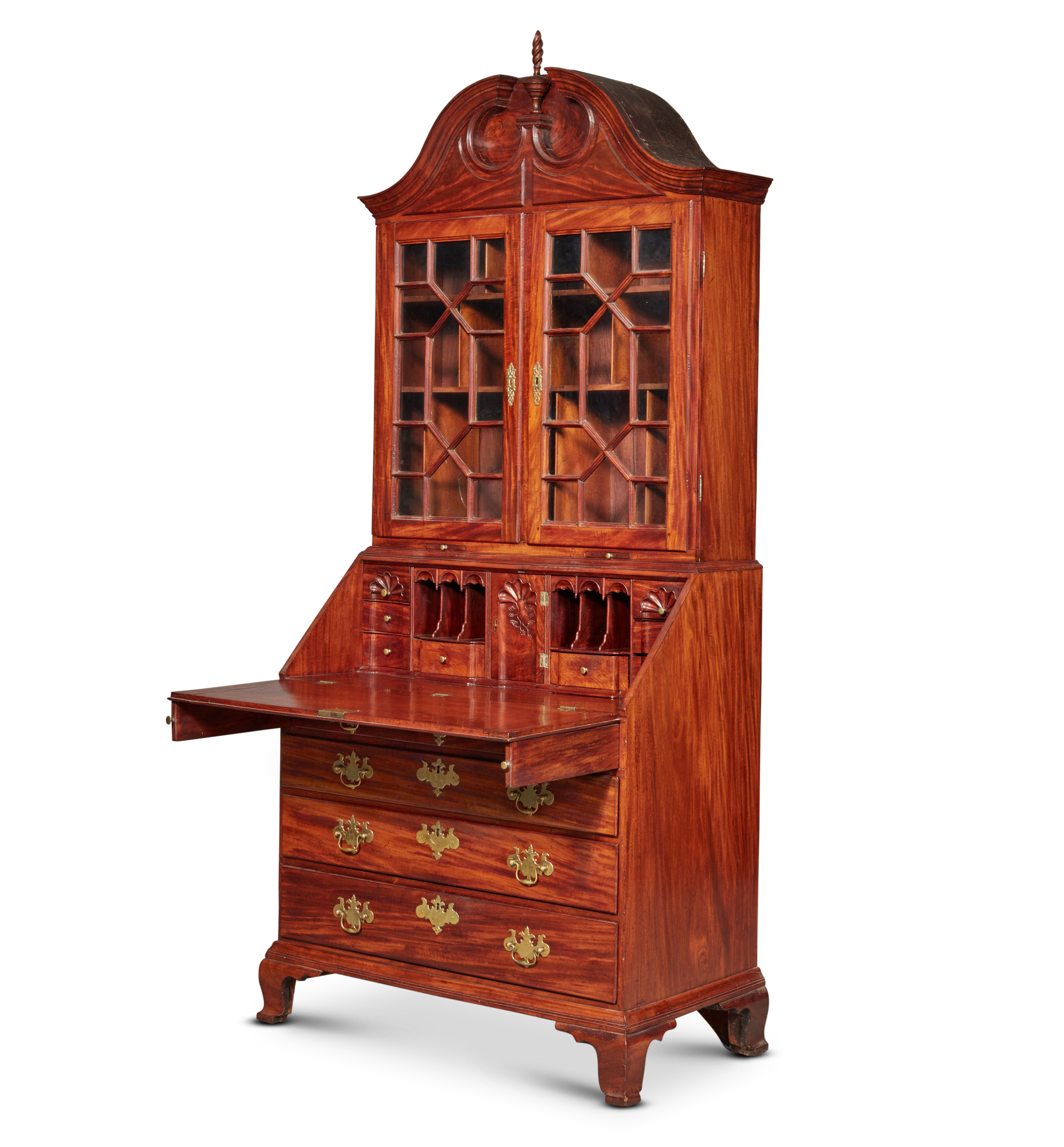 This desk-and-bookcase is attributed to Ichabod Cole (1748-1841), the Warren, Rhode Island shop joiner. It is very closely related to a desk-and-bookcase in a private collection with the inscription “Maid by / Ichabod / Cole / 1790”.1 That desk stands as the only signed and dated piece by Cole that survives. Another nearly identical desk-and-bookcase in a private collection is attributed to Ichabod Cole.2 The three desks are illustrated and discussed by Patricia E. Kane in her article “Ichabod Cole: A Recently Discovered Rhode Island Furniture Maker” published in The Magazine Antiques in May 2007.3

All three desk-and-bookcases are of the same form and made of mahogany with similar overall proportions, a scrolled pediment with applied plaques, bookcase doors (glazed here and on the one in a private collection and block-and-shell carved on the signed desk), a slant-front opening to a block-and-shell-carved desk interior with pigeonhole drawer fronts, four graduated long drawers, and ogee bracket feet with small cusps. Like the signed desk, this example and the one in a private collection display several hallmarks of Cole’s work including the unusual floral motif on the prospect door and the unique marking system for the identification of drawer components. During construction, Cole marked his drawers from the bottom drawer up, rather than the more commonly found top drawer down. The fronts, sides, and backs are marked with a series of dotted vertical lines resembling the letter “i”. He marked the exterior drawer sides on the top edge with a “V” shaped incision pointing outward to indicate which side was the exterior. He added vertical lines next to the “V” to indicate placement within the series of drawers.

The desks also display the following construction characteristics identified by Kane: small interior drawers with small blocks glued to their exterior backs to act as drawer stops; pigeonhole drawers with bottom boards that are let into a V-shaped groove in the drawer front; drawers sides (except those on the valance drawers) that are one-quarter to three-eighths of an inch lower than the drawer fronts; bookcase section backboards comprised of lapped vertical boards nailed to rabbets in the bookcase sides and top; two piece white pine bottom boards; feet reinforced with white pine vertical corner blocks with abutting horizontal blocks; and the use of solid mahogany for the tops of the desks, behind the retaining molding for the bookcase.4 Though influenced by Newport design, the desk-and-bookcases display features that do not follow Newport practice. These include the cornice lacking a deep cove and formed from two ogee-curved moldings, short central plinth blocks with two bold horizontal moldings on the bonnet, pigeonhole drawers with a compact round central arch flanked by sharply defined cusps, and a base molding with a fillet below the cyma curve. The ogee bracket feet are distinctive with a short ogee curve abutting the base molding, an elongated ogee descending vertically to the floor and a fillet extending under two-thirds of the foot.5

7 Kane notes that circumstantial evidence suggests that Cole may have trained in Newport perhaps with the Lyndon family of joiners.