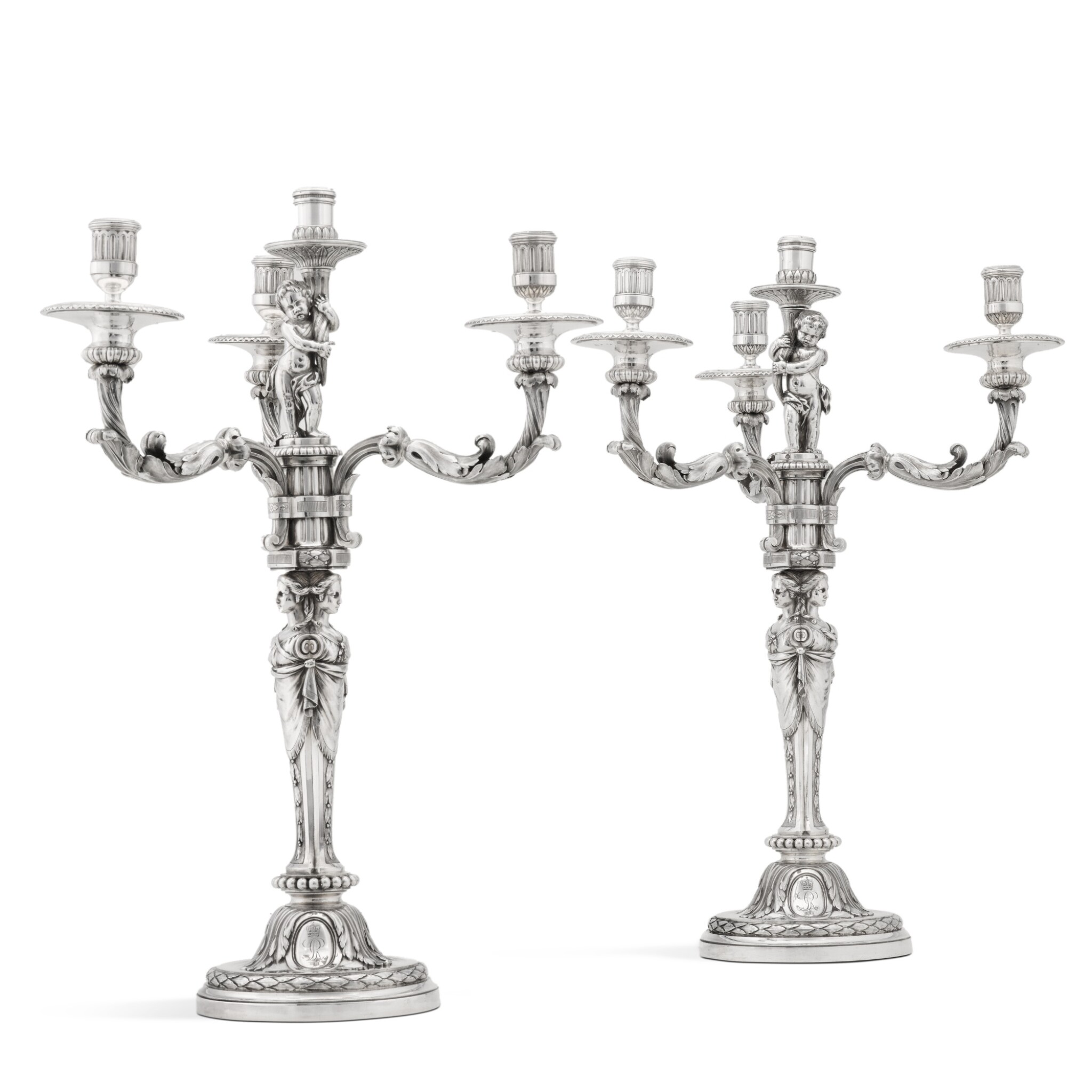 with three scrolling acanthus leaf branches leading to fluted nozzles, the central lights supported by winged putti, the main stems formed as three addorsed female terms, one with eyes closed, on circular bases with laurel leaf borders and three cartouches, one engraved with the cypher of George III below a crown,

Central nozzle of one loose on thread, one not a perfect seat on a flat surface, two nozzles are not chased with leaves at their bases (this is same as candelabra in Louvre, Getty and Waddesdon) some marks quite difficult to read but other marks very good, excellent and imaginative modelling, lovely colour, substantial weight.

For detailed information regarding where each piece is hallmarked, please contact Miles Harrison in the London Silver Department: miles.harrison@sothebys.com

Ordered by George III (1760– 1820) for his electoral palace in Hanover, thence by descent to

Ernest Augustus, Crown Prince of Hanover, 3rd duke of Cumberland and Teviotdale, sold in 1923 to

Louis Cartier, thence by decent to

Claude Cartier, sold after his death

The silver service, of which these candelabra are a part, was commissioned by George III in the 1770s for use at his palaces in Hanover, and to represent his majesty in his absence. The intention had been to order the service from the Hanoverian court silversmith Frantz-Peter Bundsen (1725-1795), and in October 1771 the king approved the project with the stipulation that he received design drawings first. Two years later Bundsen was no longer considered for the undertaking, and while we don’t know the precise reason for this, it’s possible that his designs did not meet the approval of the king. He was certainly capable of completing such a large order because he would later be asked to supply a significant proportion of the service using Auguste’s designs.

With Bundsen no longer in the running, the Chamberlain at Hanover began to look further afield and invited the Wurth family of silversmiths in Vienna and Luigi Valadier in Rome to present their drawings for the service. Ultimately, these came to nought, and after a gap of four years the commission was awarded to Robert-Joseph Auguste. George III may have been familiar with the Parisian silversmith’s work from his friendship with Simon, Ist Earl Harcourt (1714-1777), who was an enthusiastic patron. Indeed Harcourt’s wine coolers by Auguste (see lot 28) are clearly the inspiration for a pair in the Hanover service.

The first delivery was received in Hanover in 1777 and the last in 1786, sixteen years after the initial idea was conceived. Six candelabra were delivered to Hanover by Auguste, and further additions continued to be made to the service up to 1801 by Ignaz-Sebastian Wurth in Vienna and Johann-Daniel-Conrad Bundsen of Hanover. While George III did not get the opportunity to use the service in Hanover he did see it when it was brought over to England following the invasion of Hanover by Napoleon's armies in 1803. The decision had been made to evacuate the silver by sea, and after arriving in 70 crates at Custom House Quay in London, it was sent up the Thames to Windsor where it was used as decoration in a Royal Fete in Windsor in February 1805 along with other silver items from Hanover. A favourable report of the evening was made by one commentator:

‘Great preparations have been making for a month past, new furniture, pictures removed, and a great collection of very fine new ones…. the magnificent plate which was brought from Hanover, consisting of tables, stoves, fire-furniture, nine fine lustres, 30 tureens, 50 dozen plates, silver drums, and many other articles.’ (Gentleman's Magazine, pt.1, 1805).

After Hanover was liberated the service returned in 1816 and further additions were made, including forty-eight sets of dessert flatware. The next journey the service was to make was in 1866 when George Frederick, King of Hanover, was deposed during the Seven Weeks War, and the Hanover royal family was obliged to leave for Austria taking their silver with them. In 1923, following the death of Ernest Augustus, Crown Prince of Hanover, part of the Hanover silver was sold to the Viennese dealer Glückselig who in turn sold much of it to Crichton Brothers in London. The silver generated such interest that Crichton Brothers staged an exhibition of the silver in 1923 where it was sold to the French branch of the Rothschild family and Louis Cartier buying two and four Auguste candelabra respectively. The Musée du Louvre received a number of pieces from the Rothschild portion in 1975 including one pair of Auguste candelabra. The four bought by Louis Cartier were sold by Sotheby's in 1979 of which one pair were later purchased by the J. Paul Getty Museum in 1984, and the current lot were bought by the current owner. A set of four Bundsen candelabra along with further pieces from the service are on display at Waddesdon Manor.