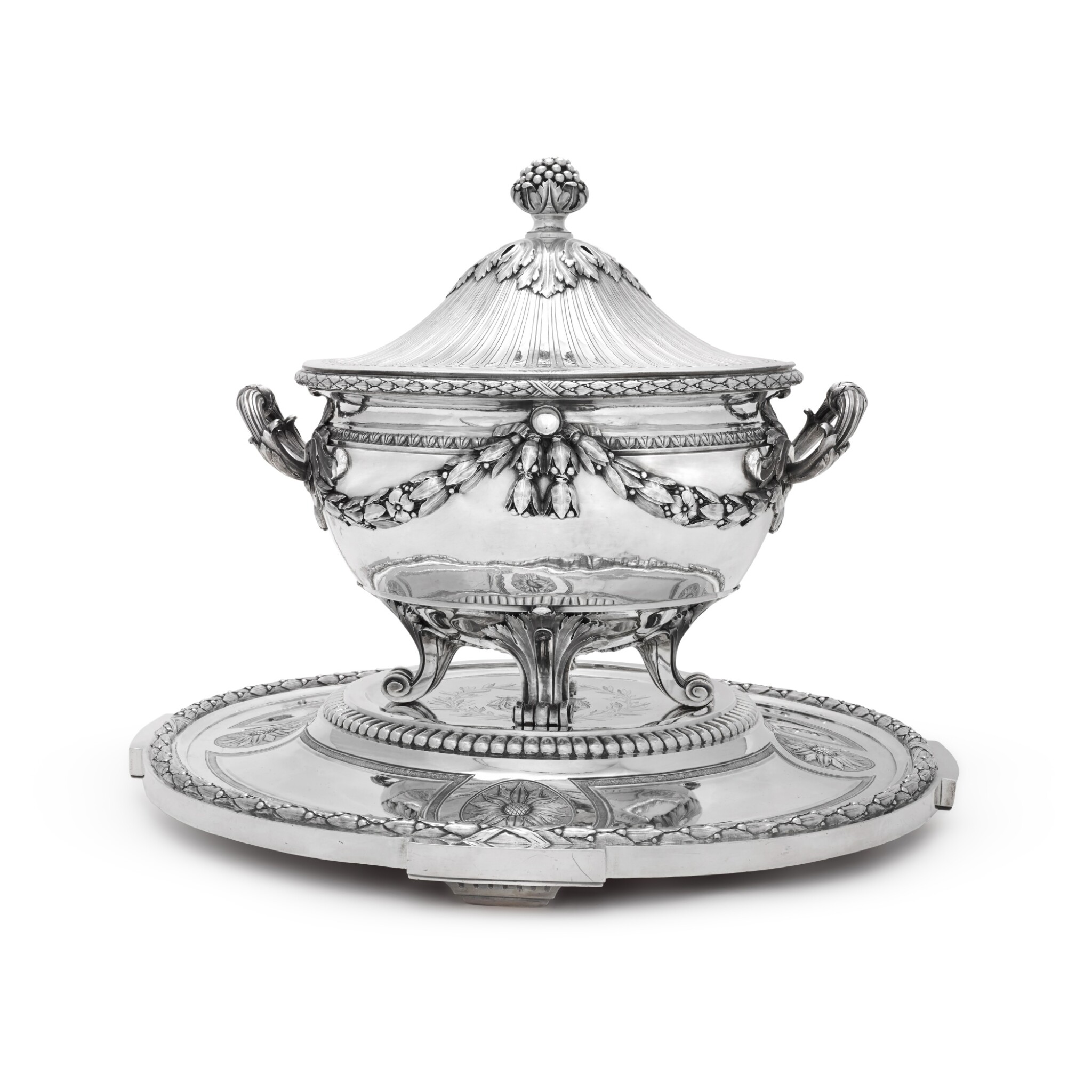 with two foliage and reeded handles and husk-cast border, the cover fluted and rising to fruiting finial, the stand with husk border and four flower medallions, engraved on the stand under the tureen, inside cover and on liner with the arms of the Dukes of Cadaval, below a duke’s coronet

The Dukes of Cadaval were intimately connected to the ruling house of Portugal and politically oriented towards France. Descending from the house of Braganza, an ancestor, Francisco de Melo, Marquis of Ferreira (1588-1645) had been instrumental in the accession of Joao IV to the Portuguese throne. In recognition of this and his other great services to the crown, the King created Francisco’s 10-year-old son the 1st Duke of Cadaval in 1648. The first duke became head of the household of the French-born Queen of Portugal, Marie-Françoise of Savoy-Nemours, a great granddaughter of King Henry IV of France; he married, as his first wife Marie Angélique Henriette de Lorraine who was herself a granddaughter of Henry IV. The 3rd Duke, Jaime (1684-1749) after marriage to Luisa, natural daughter of King Pedro II of Portugal, married another French princess from the house of Lorraine, Henriette Julienne Gabrielle (1722-61), daughter of Louis, Prince de Lambesc. A 19-piece silver toilet set, Paris 1738/39, maker’s mark of Alex Loir and others, in the Detroit Institute of Arts, is believed to have been a wedding present for Henriette at their marriage. (https://dia.org/collection/toilet-service-duchesse-de-cadaval-102681)

By tradition, the tureen or pot à oille now offered is considered to have been ordered by the 5th duke of Cadaval (1765-1808), who had inherited the title in 1771. He married in 1791 Marie Madaleine de Montmorency-Luxembourg (1778-1833), whose mother was lady-in-waiting to Queen Marie Antoinette.

Yves Carlier mentions the design of this tureen in connection with a drawing, part of a group by Robert-Joseph Auguste which was the subject of an exhibition in 2011/2012 (see literature). He also connects that drawing to a tureen by Auguste from the Moscow service made for Empress Catherine of Russia in 1782/83. There is no doubt that the design of the tureen was influential in the Russian Governmental services as eight identical oval examples were copied for the Perm service of 1781-83, by the Augsburg goldsmiths Sebald Heinrich Blau and Johann Wilhelm Dammann.

Circular tureens as opposed to those of oval form were known in France as pots à oille, after the Spanish word olla. This was a stew of meat and vegetables, thought to have been introduced to France by Marie-Therese of Austria, daughter of Philip IV of Spain and wife of Louis XIV. Tureens were the most expensive part of the silver service and were placed on the table to be used as part of the initial course at ceremonial meals. A painting of a banquet by Martin van Meytans (Schloss Schonbrunn, Vienna) to mark the election as King of the Romans of Joseph II (1741-1790), in 1764 shows a table laid with oval and circular tureens. The painting includes place settings flanked on the right by a knife with steel blade for cutting, on the left two forks, one with two steel tines to work with the knife and another with three tines for eating. At the top is a spoon, bowl side up pointing towards the right. There is no sign whatsoever of alcohol on the table at this point.