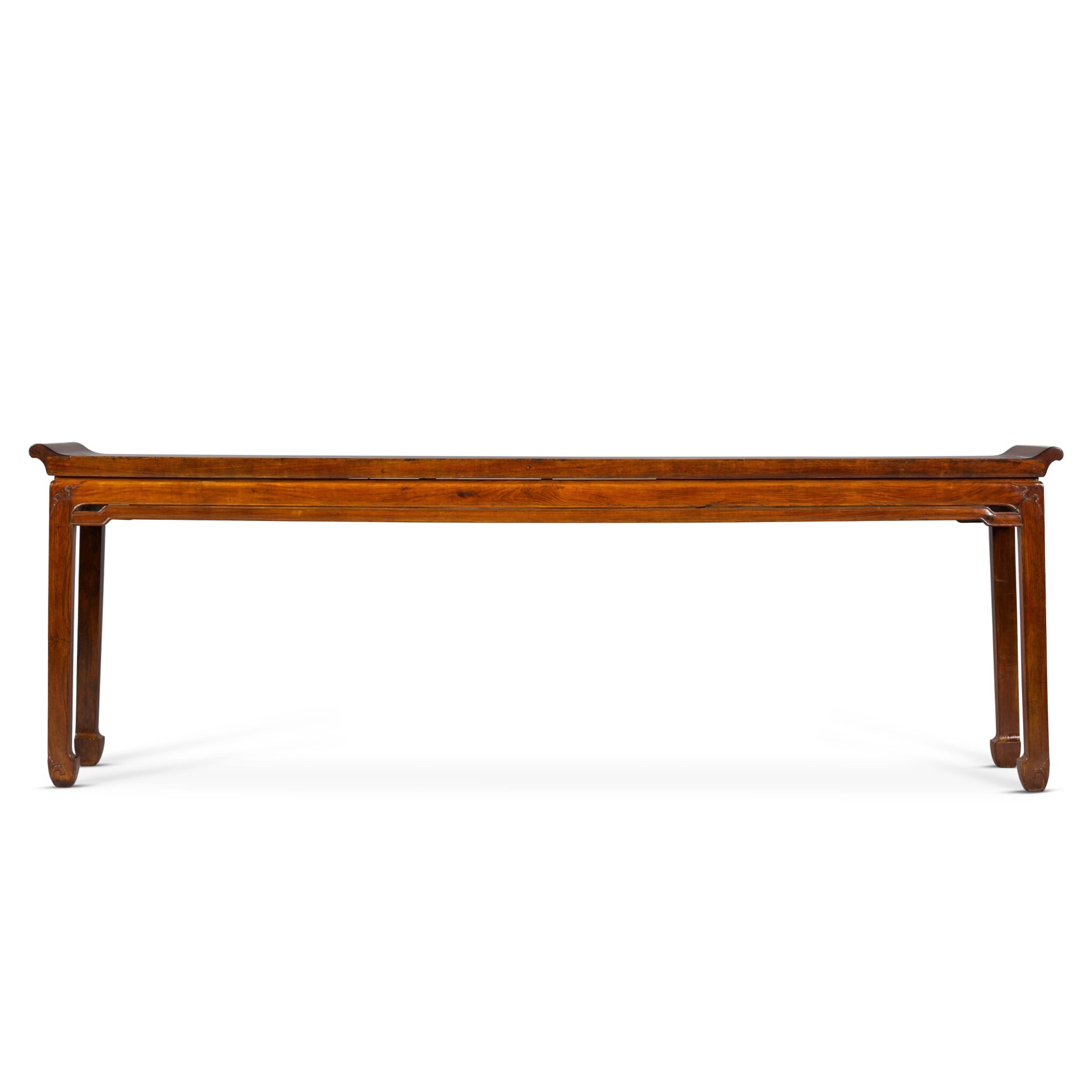 the long rectangular single-board floating panel top of well-figured wood set with everted ends, the moulded-edge frame over a recessed waist and straight beaded-edge apron, the square-section beaded-edge legs terminating in hoof feet and joined by arched and beaded-edge stretchers mortised and tenoned into the legs below the apron

There are some ring marks on the surface, and very minor fills to the end of the top and sides. Some movements in joints are visible, the back apron is slightly bent, consistent with age. There are also some patchings to all four internal joints. One of the side aprons has been replaced.

This lot contains endangered species. Sotheby's recommends that buyers check with their own government regarding any importation requirements prior to placing a bid. For example, US regulations restrict or prohibit the import of certain items to protect wildlife conservation. Please note that Sotheby's will not assist buyers with the shipment of this lot to the US. A buyer's inability to export or import these lots cannot justify a delay in payment or sale cancellation.此編號含有瀕臨絕種物料。蘇富比建議買家在投標之前，先理解有關地方政府的入口限制。如美國為保護野生動物而對有關材質所實行的出入口規條及限制。蘇富比將不會協助此編號運往美國的運輸。買家無權因為未能得到出入口許可而取消拍賣及延遲付款。

With its large, single-plank surface, this monumental table is designed to display the natural beauty of the highly prized huanghuali wood. The form of this table is known in Chinese as qiaotou (‘upturned end’). In his Zhang wu zhi jiao zhu (Treaties on Superfluous Things), the Ming scholar Wen Zhenheng (1585-1645) notes that in elegant examples of such tables ‘the end flanges must not be too sharp, but smooth and rounded which is the antique pattern’ (Craig Clunas, Chinese Furniture, London, 1988, p. 54), as exemplified by the present piece.

Despite the name ‘altar table’ in English, such tables, as contemporary illustrations indicate, were often used as side tables. They were usually placed against a wall, hence are sometimes also called bi zhuo (‘wall table’), in the main hall of family compounds where important visitors were received and family ceremonies were held. Displaying flower vases, treasured antiques or contemporary art objects, tables of this type became representative of their owner’s status and level of refinement.

For a related example, see a smaller huanghuali table (185cm) with everted flanges at the ends, but with a frame-and-panel top, lacking the horizontal stretchers and carved decorations at the corners, formerly in the Museum of Classical Chinese Furniture, Renaissance, California, subsequently sold at Christie’s New York, 19th September 1996, lot 22.