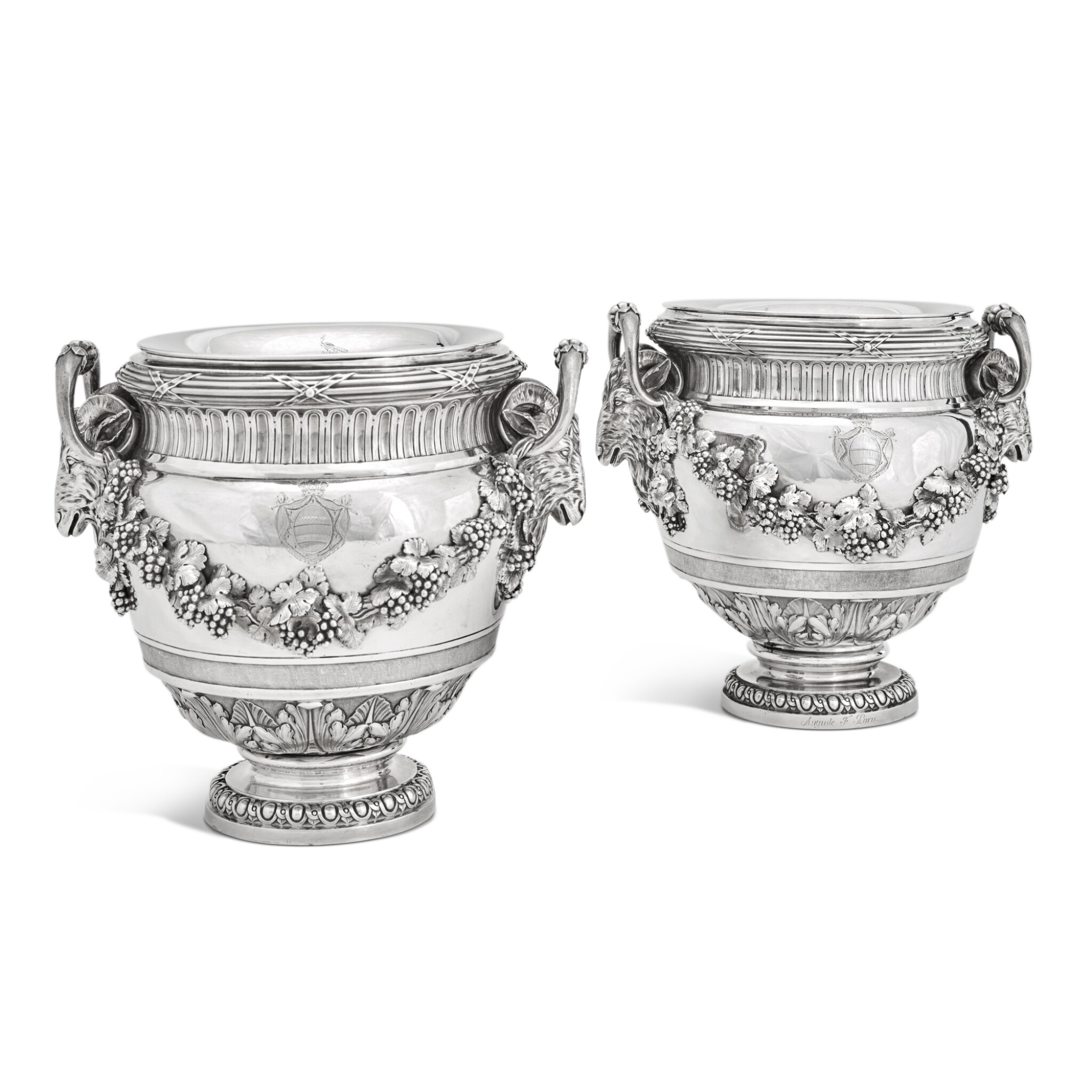 engraved with the arms of Earl Harcourt within drapery cartouches above applied bold swags of fruiting vine hanging between two goat masks, the horns rising to form handles, acanthus leafage below matted girdles above the guilloche-bordered bases inscribed on the rims Auguste F. A Paris, the foot rims hallmarked 1767/68, also No 1 and 2 with scratchweight 110=6 and No 2 and 3 with scratchweight 112=14,

Cooler no.1 slightly rocking on foot, very small piece of ribbon missing (at ribbon-tied and reeded border), small split to rim, both with good clear engraving of coats-of-arms and crests, both with good and clear marks on foot rims, marks on bodies still clear but not as good as those on the foot rims, overall normal little dents and wear commensurate with age, generally in good condition.

THE GENIUS OF ROBERT-JOSEPH AUGUSTE

Considering his success and position (Orfèvre du Roi on 23 March 1775 with responsibility for all official silver)1 surprisingly little has been written about Robert-Joseph Auguste 'who awaits his archivist and biographer'.2 He registered a silver mark at the relatively late age of 34 in 1757 but had worked during the previous ten years for other goldsmiths and for the king. Three years before registering his mark he was described as modeleur-ciseleur and in the almanach Dauphin as un des plus habile cizeleurs en bijoux de bas-relief.3 In 1755 Auguste made the gold salt and pepper for Madame de Pompadour representing un Hollandois qui present une huitre and un paysan qui tient un sac, possibly after his own models and not those of Maurice Falconet as is generally believed.4 When these were sold publicly in 1777 they were described as de bon goit & de la plus parfait exécution par M. Auguste.5 To name the author in a sale catalogue of the time was considered a mark of particular distinction.

By 1777 Auguste had notably completed the crown jewels for Louis XVI's coronation and a large silver service for George III, while beginning the formidable Russian commissions which were to continue until the early 1780s. He had become so successful that in 1778 during the month of April alone silver from the Auguste workshop taken to the gardes for weighing and control amounted to 4000 marcs by weight,6 nearly 1000 kilos and over 100 times the weight of the present wine coolers.

It hadn't always been so good. After an explosive start to his career with the silver tureens for Christian VII of Denmark in the late 1750s, Auguste seems to have been emerging from a relatively difficult period. This was caused by the Seven-Years-War which dragged silver to the melting pot, but was made worse by financial problems, the result of calls on the debts of others like the king's jeweller Claude Dominique Rondé, which he had guaranteed.

Auguste appears to have produced little work and almost no silver for a number of years. Two gold boxes survive from this period (Hermitage, St. Petersburg 1760-61; and the Louvre 1762-63).7 Like his contemporary François-Thomas Germain, August also made gilt-bronze items such as candle branches for the royal palace of Choisy (1756) and table borders for Madame de Pompadour's brother the Marquis de Marigny (1759). A gold chalice and patten for the Dauphine also remains from this period. As a result of Auguste's financial straits it was removed from his workshop by the authorities before completion and given to François-Thomas Germain for safekeeping. Eventually, Auguste was allowed to finish it and, signed and dated 1760, it was presented to the Empress in Vienna before arriving at its intended destination, the parochial church in Radmirje, Slovenia in 1763. The end of Auguste's period of relative inactivity coincided with François-Thomas German's bankruptcy in 1765.8

Auguste was particuarly well connected and his circle included people associated with the change in style from rococo to early neo-classicism, which effected the decorative arts. The Marquis de Marigny, Charles-Nicolas Cochin polemicist for change, and Jacques-Germain Soufflot architect of the Pantheon, attended Auguste's marriage;9 as did the antiquarian comte de Caylus and Madame de Geoffrin whose salon was frequented by Voltaire and his circle. A letter from Cochin to Marigny in 1765 commends Auguste above his contemporaries. 'Il ne pârait maintenant de distingué dans cet art (L'orfèvrerie) que M. Auguste, tous les autres étant plutôtdes marchands qui presentent sous leur nom les ouvrages de bons ouvriers que des gens capable d'éxecuter eux-mêmes.'10 This comment made in the year of F-T Germain's bankruptcy, throws light on Auguste's working practice and contributes something to the belief that he was a sculptor (as well as a designer and chaser). The comment was probably influenced by the level of sub-contracting undertaken by certain high profile goldsmiths like Germain, rather than distaste for the practice itself, which was common and necessary in the trade. It is interesting to note the comments of Yves Carlier who believes that when a piece of silver was signed as in fait par FT Germain Sculp. Orfr. du Roy, or Auguste F. A. Paris, as are the present wine coolers, this was not about who made it,11 but who was the 'owner, perhaps copyright holder in modern terms, of a model, not necessarily its author.'12

Lord Harcourt's wine coolers of 1766/67 appear to be the earliest recorded example of this model. Made well before the accession of Louis XVI in 1774 they exemplify the Louis XVI style that came to dominate for a time the look of silver in France and internationally. In the words of Henri Bouilhet: '...on peut dire, néanmois, qu'Auguste résume et caractérise L'Orfèvrerie de 'époque Louis XVI. Il en est, pour ainsi dire, la personnification'.13

The present pair of wine coolers are thought to be the earliest recorded example of this model. A pair with horned satyr mask handles from the Ekaterinoslav service, now in the Gulbenkian museum Lisbon14 were made in the following year in 1767/68. Copies with goat's head handles from the Portuguese royal orders exist in the Ajuda Palace and the Museum of Ancient Art, Lisbon, both of which are dated 1778/79.15 Two pairs of 1778-79 with the arms of the Duke of Cadaval were sold Christie's Geneva, 27 April 1975 and 8 Nov 1977, lots 106 and 305 respectively. A goat's head pair with the addition of a Bacchus mask, dated 1777, and with later German bases were part of the George III service, sold Sotheby's Monaco, 27 November 1979 lot 840. A set of four 1775/76 from the same service are at Waddesdon Manor, The Rothschild Collection (Rothschild family trust). A single example of 1776/77 from the Ekaterinoslav service is illustrated by Bjorn Kommer Zirbelnuss und Zarenadler, Augsburger Silber für Katharina II von Russland, Munich/Berlin, 1997, p. 75; and a pair of 1778, part of the Kazan or Nijegorod services were illustrate by Henry Nocq page 32. (see: literature)

Simon Harcourt finished his education with four years travelling abroad and returned home to be appointed Lord of the Bedchamber to George II aged 22 in 1735. Towards the end of this appointment in 1749, having been with the king at the battle of Dettingen he was created Viscount Nuneham and Ist Earl Harcourt, and soon afterwards Governor to the Prince of Wales in 1751. Writing to Lord Harcourt from Saville House about his history lessons, the young prince observed that Richard II was a poor ruler. 'They were in hopes that he would have made a good King; but they soon lost their hopes, for he loved flatterers who are the greatest serpents a Court can have...' After the prince had become king he sent Lord Harcourt to Mecklenburg-Strelitz to escort his bride Charlotte Sophia back to England. The Earl took a portrait miniature of the King with him 'richly and most prettily set round with diamonds'. At the royal marriage Lord Harcourt's daughter Lady Elizabeth was one of the Queen's bridesmaids 'dressed in white and silver' and wearing a diamond coronet.

Lord Harcourt accepted the appointment of Ambassador to Paris in 1768, and set out from his London home in Cavendish square on 3 January of the following year. A week later he had his first audience with Louis XVI at Versailles.16

It is not known exactly when Lord Harcourt acquired these wine coolers but it is almost certain they were in his possession before the indenture plate of 1768/69, which was granted to him as ambassador to Paris, and which included the English copies of these coolers marked by Parker & Wakelin in 1768 (see lot 29). This plate amounting to approximately 7000oz., was delivered to his goldsmith, Parker & Wakelin by their various suppliers in early 1769 (February and March).

Approximately 2000oz identifiable as being part of this ambassadorial grant and invoiced to the Earl on 13 March 1769, was sold in 1993.17 The fact that it was all in French style was almost certainly not because Lord Harcourt had been appointed ambassador to Paris but because the French led fashion in most things including silver. Other English copies were made of French items in the Earl's possession. These include the Thomas and William Chawner service of spoons and forks of the same year, which are copies of a service made by Françoise-Thomas Germain in 1767.18

The Earl continued to purchase Auguste's work and have it copied in England during his period as ambassador. For example a pair of fluted candlesticks of 1771 were copied in 1772 by Thomas Pitts, principal supplier to Parker & Wakelin.19