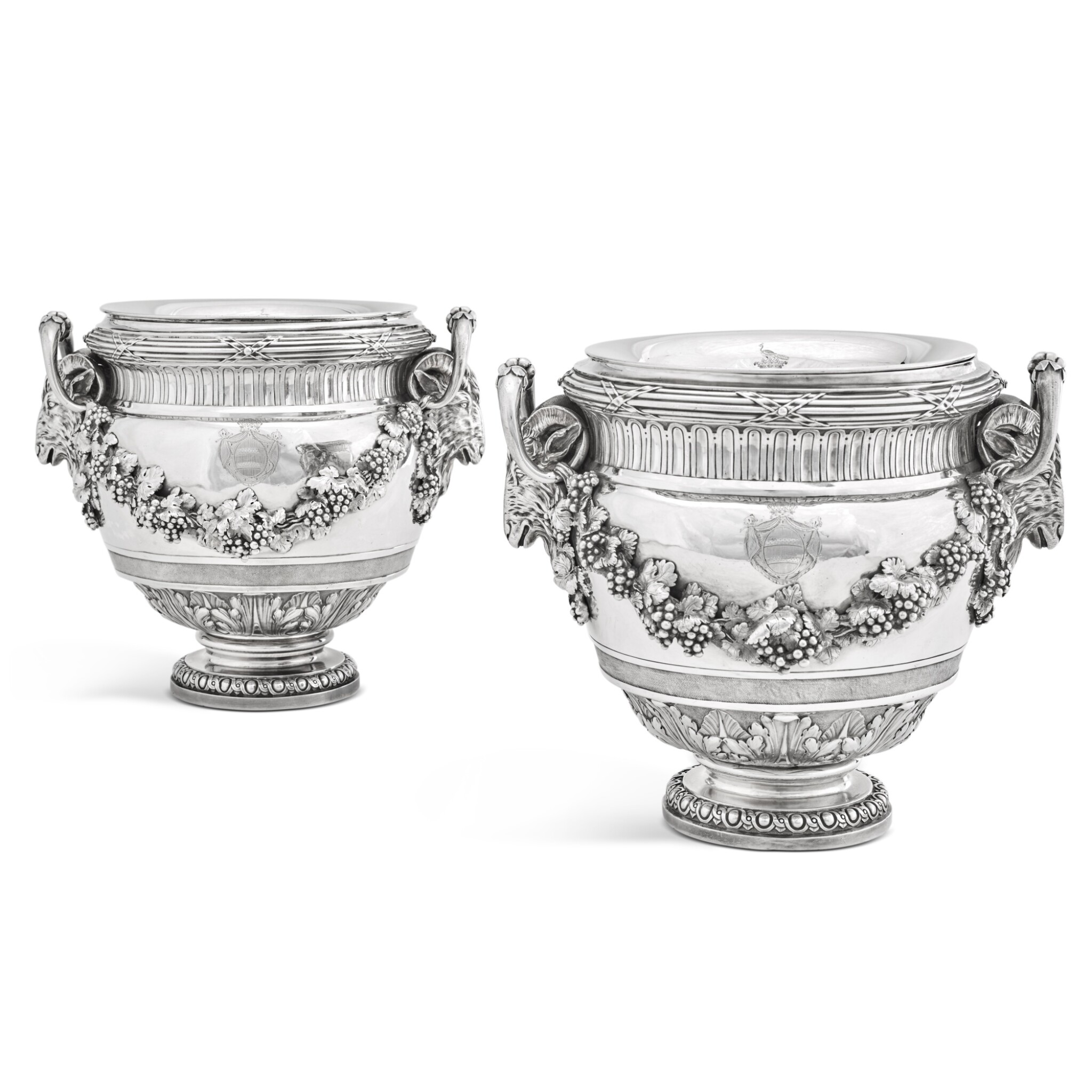 The arms are those of Harcourt, Earls Harcourt of Stanton Harcourt, Oxfordshire, for Simon Harcourt, 1st Earl Harcourt (1714 – 16 September 1777). Educated at Westminster School, he succeeded in 1727 on the death of his grandfather, Simon, Viscount Harcourt, to the family titles and estates. He was married on 16 October 1735 to Rebecca (d. 1765), only daughter and heir of Charles Sambourne Le Bas of Pipewell Abbey, Northamptonshire, with a dowry of £60,000. They had four children. In 1735 Harcourt was appointed Lord of the Bedchamber to George II with whom he attended the Battle of Dettingen on 27 June 1743. Six years later he was created Viscount Nuneham of Nuneham Courtenay and Earl Harcourt of Stanton Harcourt.

In 1768 Earl Harcourt was appointed British ambassador to Paris, but, according to Martyn J. Powell writing for the Oxford Dictionary of National Biography, he ‘clearly did not have the experience requisite for such an important post during a time of international crisis. Moreover, his own commitment to the job was less than wholehearted, as between 1769 and 1772 his absences from this post added up to over a year.’ In 1772 he replaced Lord Townshend as Irish Viceroy, a post from which he retired early in 1777. Later that year, while walking on his estate, Nuneham Park, he fell head-first into a well and died while attempting to rescue his dog.

These wine coolers, recorded in Parker & Wakelin's ledgers, were commissioned by Lord Harcourt as part of his 1768/68 indenture plate to which he was entitled as ambassador to Paris. The firm's Gentleman's Ledger detail the transaction with his Lordship on 13 March 1769:

Since the late 17th century, it had become established that plate issued to ambassadors might be kept as a perquisite of office in order to compensate for the excessive expense incurred while in the post. By the 1760s a standard grant of approximately 7,000oz. of silver had been established as the norm, 1,000oz. of this being gilt. While the Crown funded the grant, the ambassador ordered what he wanted from his own goldsmith who then sent it to the Jewel House for control and recording. A detailed list in the ledgers of Lord Harcourt’s goldsmith Parker & Wakelin for 13 March 1769 deals with the plate which he took to Paris. The total cost amounting to £3862 11s 2d was for both new plate and repairs to old and included carriage paid `for cartage to ye Jewel office D[itto] back…’

The ledger shows how Parker & Wakelin orchestrated Lord Harcourt’s order, receiving what his Lordship wanted from their various suppliers such as Ansill & Gilbert and Thomas Pitts (general plateworkers), Thomas Squire (cutler), David Hennell & Son (salt cellars), William and Thomas Chawner (spoons and forks) and Philip Norman (knife handles), on and around 9 March 1769. The Parker & Wakelin mark struck on Lord Harcourt’s silver did not therefore indicate that they were the actual manufacturer. In this regard it is interesting to note that wine coolers based on the present examples with the mark of Thomas Pitts’s son William were made in 1801, 1807 and 1803, for which see Sotheby’s, London, 26 April 1979, lot 144; 16 March 1978, lot 214; and Christie's, Geneva, 11 November 1975, lot 35)

To quote the late Arthur Grimwade, ‘Once [Paul] de Lamerie was dead in 1751 the centre of production for fine work [in London] was divided between Panton Street [Parker & Wakelin] and Thomas Heming’s establishment. The best production of Parker and Wakelin show considerable awareness of French taste and technique.’ This latter may be explained by the fact that for a generation the firm’s wealthiest customers like Lord Harcourt, enamoured of French fashions, commissioned them to copy French models. It was less expensive to have such pieces made in London than in Paris, where the prescribed standard of silver was purer than in England and import taxes were excessive.