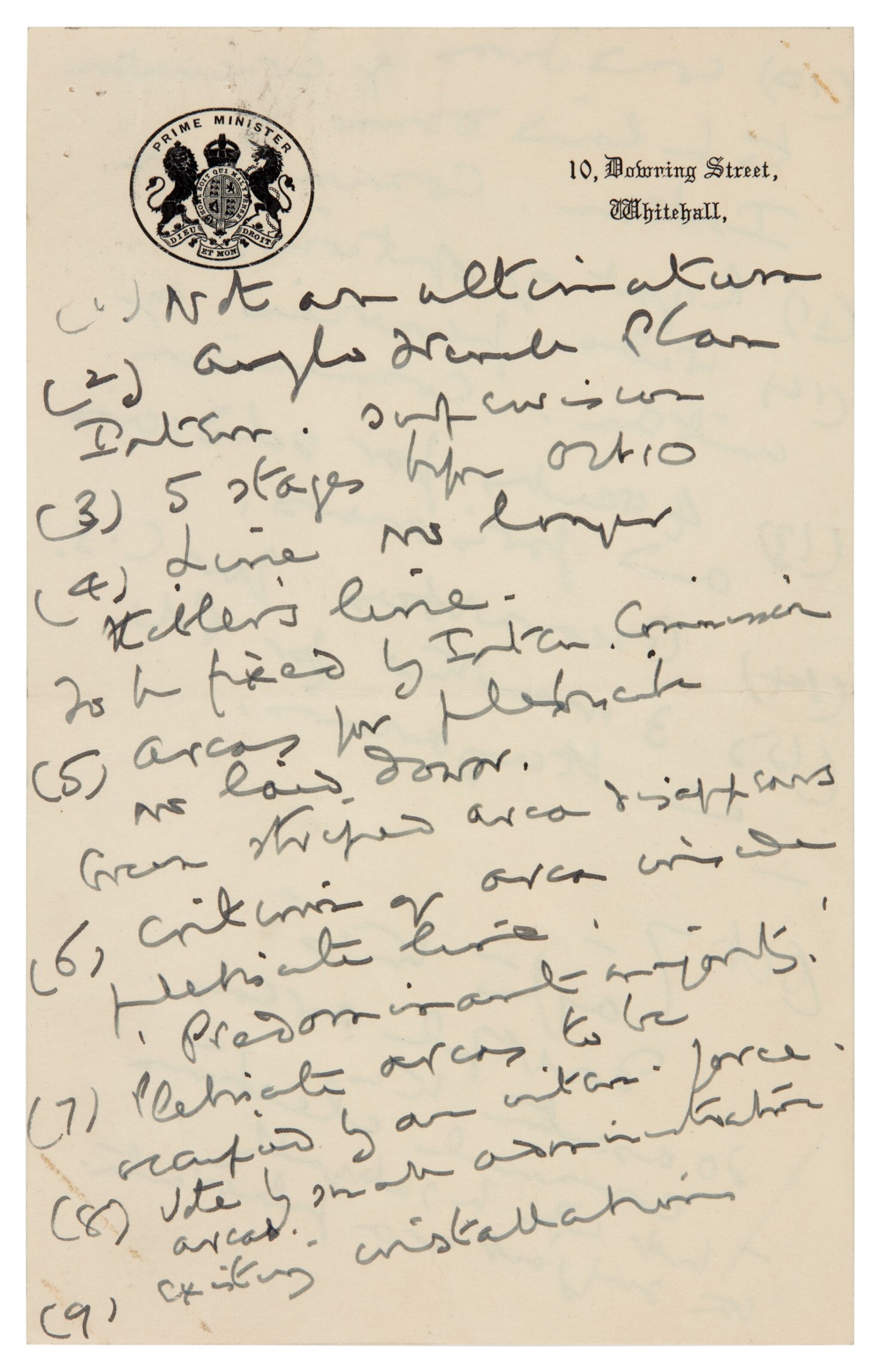 outlining fifteen points of difference between the terms offered by Hitler at Godesberg and at Munich (such as "...(1) Not an ultimatum..." and "...(4) Line no longer Hitler's line. To be fixed by Inter[national] Commission..."), with an additional note concerning the proposals to be effected after 7 October ("after this doubtful areas to ascertain this - communal elections but will be subsequently the subject of a plebiscite"), 2 pages, 8vo, Prime Minister's headed stationery of 10 Downing Street, [c.30 September 1938], small stains, pin holes

A DEFENCE OF THE MUNICH AGREEMENT BY A KEY PROPONENT OF THE POLICY OF APPEASEMENT. Desperate to avoid a European war, British Prime Minister Neville Chamberlain made a series of personal meetings with Hitler to find a peaceful way of resolving Hitler's increasingly stident and aggressive claims to the Sudetenland, the German-speaking majority areas of western Czechoslovakia. A meeting on 23-24 September at Bad Godesberg had ended by Hitler issuing an ultimatum demanding that the Sudetenland be surrendered to Germany within a week, with a plebiscite to follow German occupation and no international oversight. It was the Czech government's refusal of these terms that led to Chamberlain's flight to Munich for another meeting with Hitler on 29 September.

The current note lists differences between Hitler's earlier demands and the agreement reached at Munich. The key was an element of international supervision: the Germans were still to take the Sudetenland, but the timetable was freshly set out, borders and the plebiscite were to be supervised by an international commission, and there was to be a "Guarantee for C[zecho]S[lovakia]".

This note was written by Sir Samuel Hoare for the press baron Lord Beaverbrook, and presumably dates from the hours after the agreement was reached when the British government was briefing the newspapers. Hoare was Home Secretary and one of the inner cabinet with whom Chamberlain discussed his plan to negotiate directly with Hitler. He was also a man with a history of appeasing fascists: in 1935, as Foreign Secretary, he had signed the "Hoare-Laval" pact which had effectively legitimised Mussolini's invasion of Abyssinia.

It may be, as some have argued, that the betrayal at Munich was a hard necessity as Britain in 1938 was not ready for war with Germany, but it was the promise of "peace in our time" that gave the Munich agreement widespread popularity at the time. Churchill gave his chilling verdict in the Commons on 5 October: "A total and unmitigated defeat. France and Britain had to choose between war and dishonour. They chose dishonour. They will have war". The concession of international oversight from which this note claims legitimacy was soon to be proved worthless. Non-Germans fled from the occupied regions long before any plebiscite could be held and the rump state was not viable; within months Czechoslovakia had disappeared entirely from the map.

"This note was given to Lord Beaverbrook by Sir Samuel Hoare at the time of the Munich crisis, to illustrate the difference between Godesberg and Munich"; Sotheby's, London, 24 July 1978, lot 276