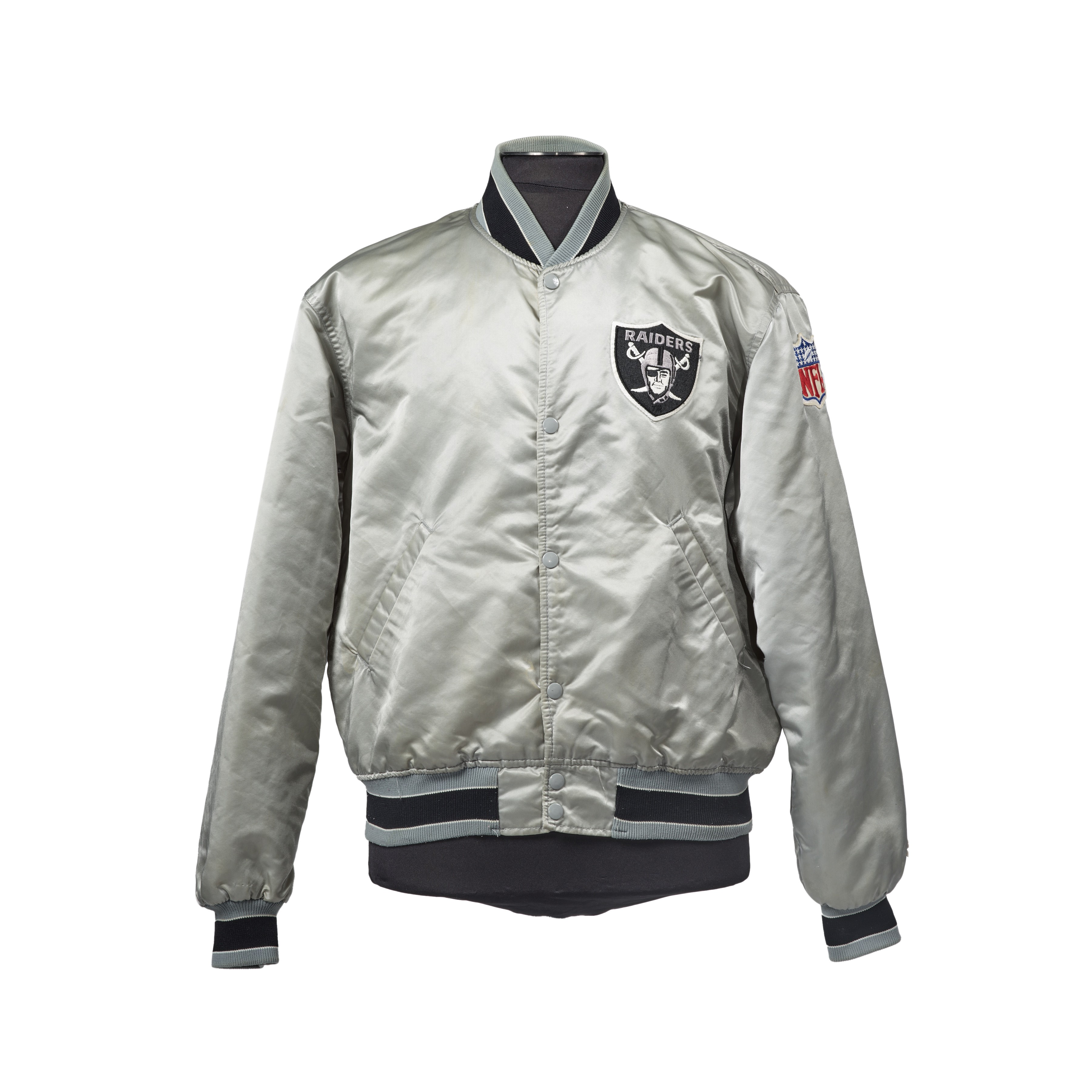 The jacket—according to Chuck D—"had to be durable on stage and carry it from city to city...so sports gear was important...the Starter jacket I wore—with no shirt underneath—handled the sweat, you could fold it, dry it, and it be just as intact the next day...so the silver and black Starter jacket is what I wore for the tours of 1988 and '89."

The jacket offered here is a testament to one of the greatest MCs of all-time, the golden age of Hip Hop, American sport, and flamboyant, in-your-face fashion.

Formed in 1985 by Chuck D and Flavor Flav, Public Enemy quickly rose to prominence for their music's political commentary, specifically targeting the American media and ongoing racism in the country. Public Enemy was one of the first Hip Hop groups to employ sonic experimentation on top of Chuck D's skilled and poetic, culturally conscious rhymes. According to music critic Stephen Thomas Erlewine, "PE brought in elements of free jazz, hard funk, even musique concrète, creating a dense, ferocious sound unlike anything that came before." The first single on Public Enemy's 1988 album, It Takes a Nation of Millions to Hold Us Back, was "Bring the Noise" (as signed on the inside of this jacket). The song's coarse and complex lyrics focused primarily on arguing for rap's place as a legitimate genre on par with rock and country music. Public Enemy would go on to prove the point, as every one of their first four albums were certified either platinum or gold.

Starter jackets were loud and ostentatious, leaning into the bold colors, attitudes, and designs of the most popular teams of the '80s and '90s. Chuck D's jacket yields from a time when the Raiders—whose official, registered trademark is "Just Win, Baby"—had just moved to Los Angeles, with their backfield loaded with the likes of NFL Pro-Bowler Marcus Allen and up-and-comer Bo Jackson. Once the athletes themselves began to wear Starter apparel it was quickly adopted by some of the biggest names in Hip Hop. In addition to Public Enemy, 2 Live Crew, Run DMC, and more could all be seen rocking Starter gear in music videos and on album covers. Next came a series of celebrity-endorsed commercials, as the Starter jacket became—seemingly overnight—a must-have clothing item and a certified status symbol of the era.

According to Carl Banks, the two-time Super Bowl champ who helped to relaunch the brand in 2013, “...nobody had really kind of captured that emotion through apparel and sports before (Starter) did it...it was the must-have, whether you’re a sports fan or an entertainer. If you go back and look at any footage from any arena or stadium during the ’90s, you’ll see a Starter jacket on a fan as much as you would see it on a celebrity."

Chuck D (b. 1960) is one of the architects of Hip Hop; politicizing music to speak truth to power. In 2016 he co-founded Prophets Of Rage alongside members of Rage Against The Machine and Cypress Hill. "Fight The Power" was voted the #2 most important song of all time by Rolling Stone Magazine. Chuck D was inducted into the Rock and Roll Hall Of Fame, in 2013.