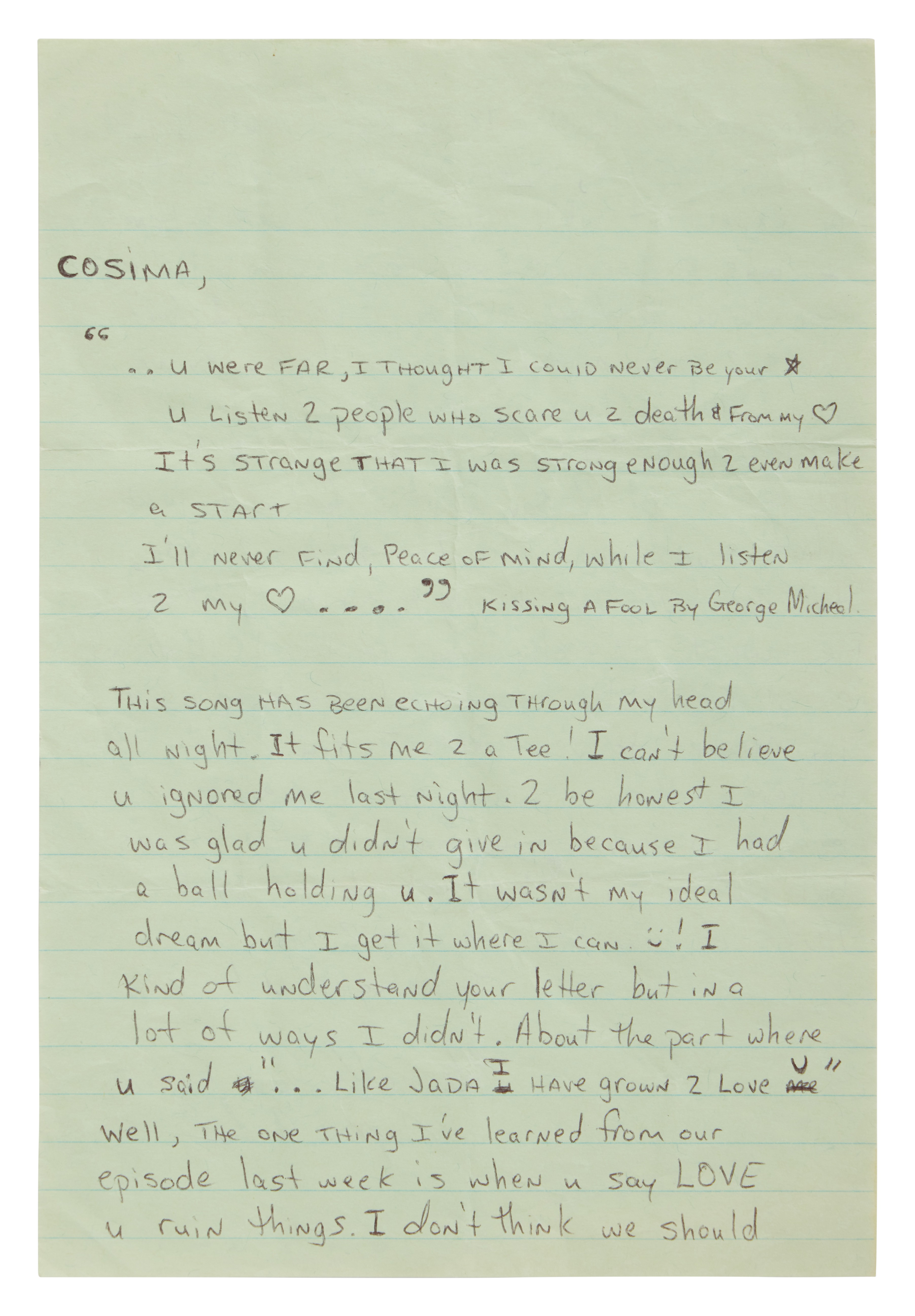 "'...U WERE FAR, I THOUGHT I COULD NEVER BE YOUR [drawing of a star]. U LISTEN 2 PEOPLE WHO SCARE U TO DEATH'.... KISSING A FOOL BY GEORGE MICHAEL. THIS SONG HAS BEEN ECHOING THOUGH MY HEAD ALL NIGHT. IT FITS ME 2 A TEE!.... U REALLY TAUGHT ME THAT LOVE DOESN'T EXIST IN REALITY. LOVE IS A FANTASY WORD USED TO SELL MOVIE TICKETS"

17-YEAR OLD TUPAC SHAKUR FINDS INSPIRATION IN GEORGE MICHAEL'S KISSING A FOOL, AND SHARES HIS ANGUISH ABOUT THE MEANING OF LOVE

Cosima, the recipient of the present letter, was a Sophomore and fellow member of the Ensemble Theatre Company. The pair shared a deep connection at this time, just before and in the beginning stages of Tupac's rise to fame, from their first meeting on Cosima's birthday in October 1988, and lasting for approximately 7-8 months. This, and the other letters offered (see lots 101-105 & 107) reveal a young man with a tender heart who was fiercely passionate and loved people deeply, who was not afraid to express his emotions and believed in clear communication. His ability to love so deeply and express this love so clearly helps to explain the indelible mark he left on the hearts of those who knew him. A printed program for the Ensemble Theatre Company, which lists both of their names is currently on display at the Tupac Wake Me When I'm Free exhibit in Los Angeles, California.

Tupac writes to Cosima, opening the letter quoting lyrics from George Michael's "Kissing a Fool," stating "This song has been echoing through my head all night. It fits me 2 a tee!" Michael wrote "Kissing a Fool" to express his uncertainties about finding love because of baggage from his past relationships, and we can see that Tupac struggled with similar feelings, as he pens "... Well, the one thing I've learned from our episode last week is when u say LOVE u ruin things." In a reversal from the letter Tupac wrote Cosima in November 1988, imploring her to define their relationship in order to spare him any heartache, he suddenly decides that defining the relationship would be harmful, as he writes "I don't think we should define our relationship. IF we keep it neutral, good. If we explore, better, but if we plan it or expect it we'll run into problems....". Despite this change of heart, Tupac still requests clear communication, and we soon learn the possible reason for the change: "WE MUST KEEP COMMUNICATIONS UP!! THAT MEANS U!! Say what you feel, not just what sounds good... Be honest!! U really taught me that LOVE doesn't exist in reality. Love is a fantasy word used in movies to sell tickets. I really don't believe in the word anymore. I mean I believe in loving your family & your friends but not a girl...".