Property from the Collection of ego trip/Ethnic Inc. 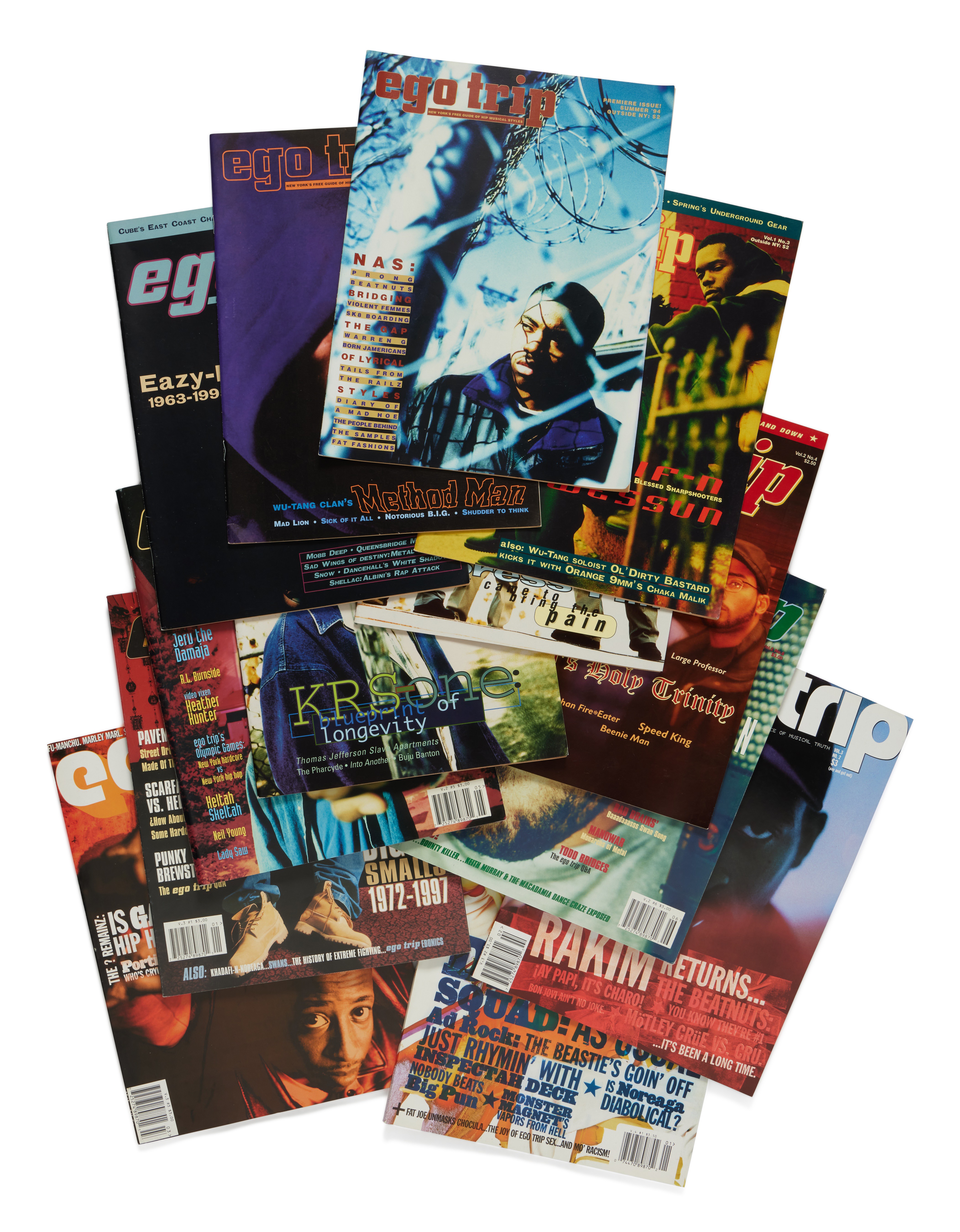 Property from the Collection of ego trip/Ethnic Inc.

13 issues, issue 1 printed in black ink on yellow paper, Vol. 1 No. 1-Vol. 2 No. 5 staple bound at spine, the rest bound at spine in glossy photographic wrappers.

Renowned as “The Arrogant Voice of Musical Truth,” ego trip magazine was formed and founded in New York City in 1994 by Sacha Jenkins and Elliott Wilson, with Jeff “Chairman” Mao as principal conspirator. Publishing early career profiles on the likes of Nas, Method Man, The Notorious B.I.G., Raekwon, Ghostface Killah, MF DOOM and others, ego trip was firmly ensconced at the nexus of Hip Hop’s ’90s creative explosion, cementing its reputation for obsessively knowledgeable and sardonically dispensed rap coverage while also reporting on the underground sub-cultures of and adjacent to NYC’s graffiti, skateboarding, and indie rock and hardcore punk scenes. By 1996, catalyzed by the additions of managing editor Gabriel Alvarez and art director Brent Rollins (both of whom defected from Los Angeles’s revered Rap Pages magazine to enlist in the ego trip guerilla unit) this central committee of furious five scribes had established itself as the most original collective editorial voice in Hip Hop publishing. Like Scarface and Willie D pushing a bloody-eyed but unbowed Bushwick Bill through a Houston hospital ward, they could not be stopped.

Through bombastic editorials written in the voice of the magazine’s fictitious white publisher “Ted Bawno” (and occasional stories penned by his entitled but delusively “down” son, “Gaelen Bawno”), ego trip’s editorial staff surreptitiously lampooned the power structure and racial dynamics at the top of the mastheads of many mainstream “urban” publications. Yet ego trip was also fully capable of thoughtfully memorializing lost icons like Eazy-E and The Notorious B.I.G., celebrating the vibrancy of artists like Mobb Deep, Redman, Rakim and Gang Starr in the midst of career-defining moments, and conducting deep dive Q&As with the vital producers responsible for Hip Hop’s sonic landscape. ego trip’s roll call of contributors encompassed the most revered writers and editors of the era. The publication’s integrity, brutal honesty, humor, and obsession with Hip Hop minutiae would culminate in Jenkins, Wilson, Mao, Alvarez and Rollins co-authoring ego trip’s Book of Rap Lists in 1999, and the collective’s fixation with race and identity would yield ego trip’s Big Book of Racism! published in 2002.

The current lot comprises a complete run of this essential publication. Lasting only four years and thirteen issues, ego trip nevertheless established itself as one of the most crucial and critical voices of the 1990s, at once both popular and political – a delicate balance achieved by few and respected by many. Any issue of ego trip, much less the entire run featured here, is highly coveted by collectors of Hip Hop's explosive output and a magazine whose effects on the culture reverberate to this day.