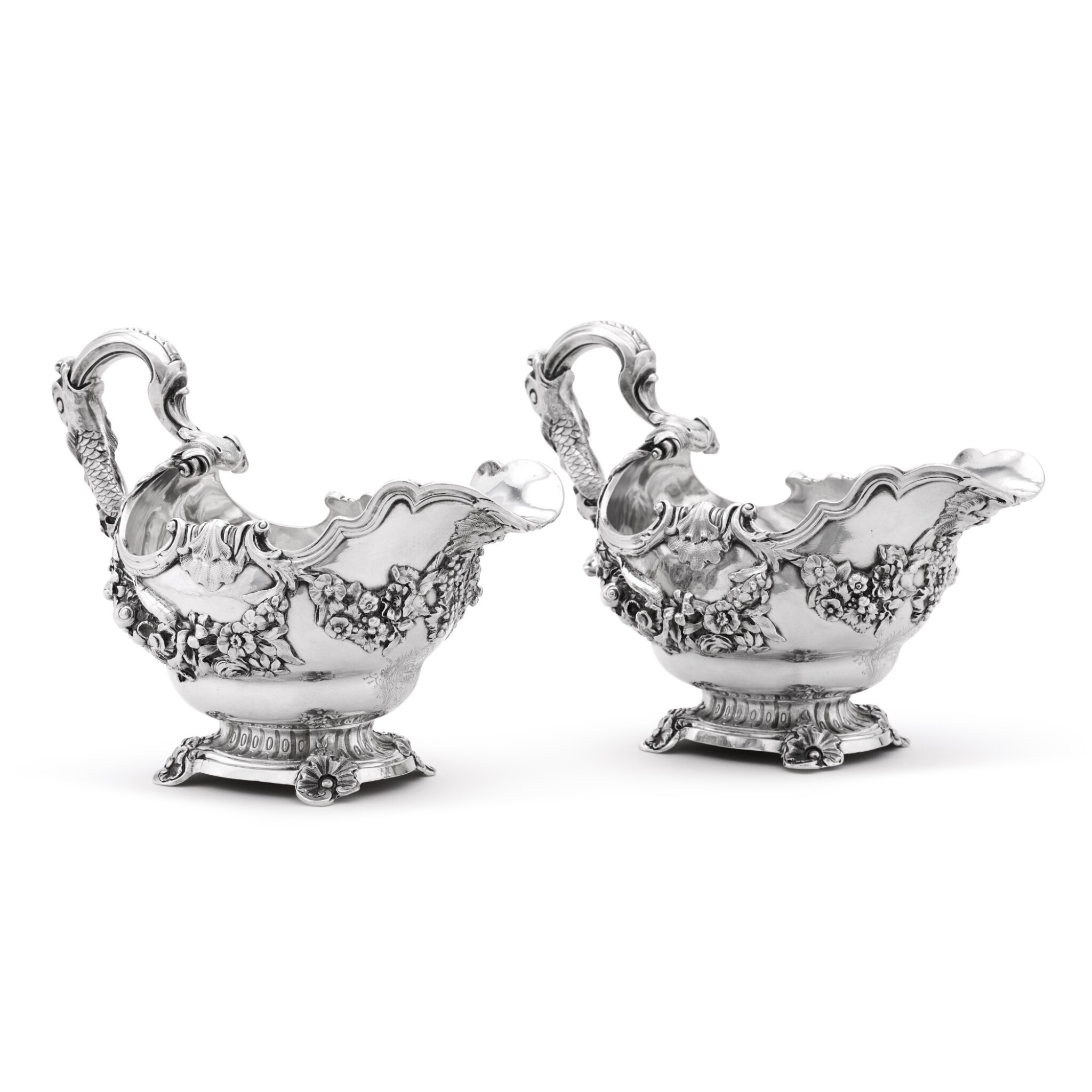 Shaped oval form, in the Rococo style with undulating moulded lips, applied with chased floral swags incorporating snails, flowers and lobsters, decorated below the lips with bearded male masks, the quilted scroll handles entwined with dolphins, the fluted bases on shell feet, engraved with the arms of John Harris Esq.

Please note that the W symbol has been removed from this lot. This lot will remain in New Bond Street after the sale.
Sotheby's London, 15 May 2003, lot 92.

Both sauceboats are hallmarked, presumably in error, with an additional variant leopard's head mark in lieu of the date letter. This variant was is seen with 1738 and 1739 date letters (Jackson's page 56).

The arms are those of Harris quartering Hayne with Tuckfield in pretence for John Harris Esq (d.1767), of Hayne Co Devon, who succeeded his brother in 1718. He was Master of the Household to their Majesties George II and George III and married twice. Firstly to Margaret, daughter of Roger Tuckfield Esq. of Raddon and relict of Samuel Rolle of Heanton; and secondly to Anne, daughter of Francis (Seymour), 1st Baron Conway, whose descendants were created Marquess of Hertford.

While English pieces in the Rococo style tend to be more conservative than those found in France, Germany and Italy, the Huguenot silversmiths working in England in the early 18th century did produce works of extraordinary invention and vivacity. The current lot can certainly be included such a group, and with the dolphin handles and lobsters included in the applied swags it’s easy to imagine these being used to serve some sort of delicious sauce over an elaborate fish dish. Indeed, the 18th century recipe book The Cook Book of Unknown Ladies makes reference to a sauce made using the body and ‘pea’ (egg sacks) of lobster:

‘Get some strong greavy, anchoves, shillot, nutmeg, & all spice. Set ym on ye fire together. Let ym stew a good while. Then strain it & draw a good deal of fresh butter, very thick, a glass of claret or white wine, ye body & pea of a lobster, or body of a crab. Mix all together.'