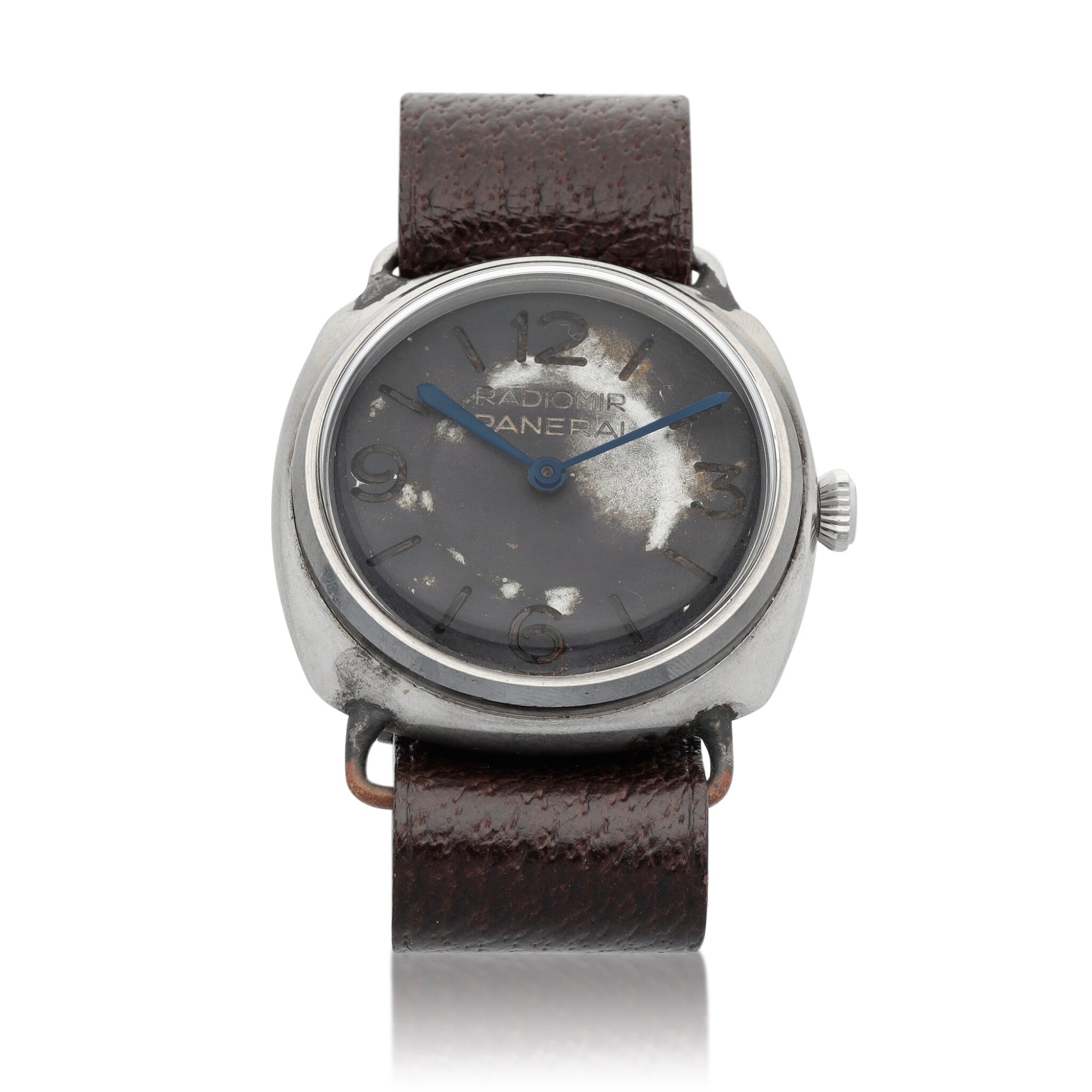 Ref. 3646, Type B Radiomir, used by a British Naval officer during the Second World War

Exhibited with: Photographs of the original owner during his service in the Navy, a copy of Marshall Pugh’s 1956 book “Commander Crabb” and a set of six British WW2 medals including, the Italy Star, Africa Star, The 1939 – 1945 Star, The Defence Medal, Medal for Long service and good conduct and the 1939 – 1945 medal. Please note these are not for sale with the lot.

CASE: is in heavily used condition with surface scratching throughout, the chromed finish has worn away after through regular use. one set of wire lugs appears to be in copper and may have been replaced.

DIAL: Dial has been damaged in use and worn away in some places down to the top plate. Radium still present beneath top layer of the sandwich dial, however due to water damage is no longer luminous.

The Royal Italian Navy began commissioning pieces such as the present lot from Panerai in the mid 1930s. The firm then developed the Radiomir Type B, ref 3646 for the Navy's frogmen, who specialized in under water military missions. The exceptional reference 3646 could withstand extreme elements while simultaneously keeping accurate time. The company utilised Rolex movements for these watches, as Rolex had already perfected the waterproof wristwatch with their Rolex Oyster. Radiomir Type B models were all produced under Oyster Watch Co, and bear a small stamp of the brand on the inner case back.

The present watch appears to be a later serial from the type B production, but predates the earliest known type C, and carries the “Oyster Watch company” designation on the inside case back with no reference to Rolex aside from on the movement. The case is in stainless steel with soldered on wire lugs, in this case the weld is very visible due to regular use in salt water which has stripped the chromed finish from the exterior.

Although issued to the Italian Gamma Group, this watch comes to us from an officer of the British Royal Navy. Chief Petty Officer Canning, who served in the Navy throughout the Second World War in North Africa and in Italy. It was in Italy he was placed under the command of Commander Lionel Crabb, who was tasked with making Italy’s ports and waterways a safe zone for British and American vessels carrying the allied forces from North Africa onto the European continent.

In 1944, Crabb and his men including C.P.O Canning were tasked with the demining the lagoon and canals of Venice following the German occupation of the city. During this period, they enlisted the help of Italian POW’s many of whom were former members of the Gamma Group of the Italian 10th flotilla, who aided the Allied forces to preserve the floating city.

Canning was placed in charge of the Italian Commander Angelo Belloni, who was aside from being the senior member of the Gamma Group was also the designer of much of the apparatus used by the Italian Navy divers. This pairing is mentioned in some detail in Marshall Pugh’s 1956 book, Commander Crabb, where the two seemingly forged a friendship. With Belloni referring to Canning as “Ginger - My Nurse” due to his red hair. It was through this friendship and comradery we believe Canning acquired the present watch. Canning is also pictured in Pugh’s book on page 87 with a number of Italian POW’s in Venice.

During Canning’s service in the Royal Navy, the watch was damaged and as can be seen has had water ingress and damage to the dial. Upon Sotheby’s receiving the watch it had no hands or crystal. A generic set of blued steel epee hands and a plexiglass crystal has been attached to the watch for the purposes of sale.

Not only does this lot present an incredible opportunity to own one of the earliest Panerai dive watches and one used by both Italian and British forces; It offers a chance to acquire a piece of history that played its part in ending the Second World War in Europe.