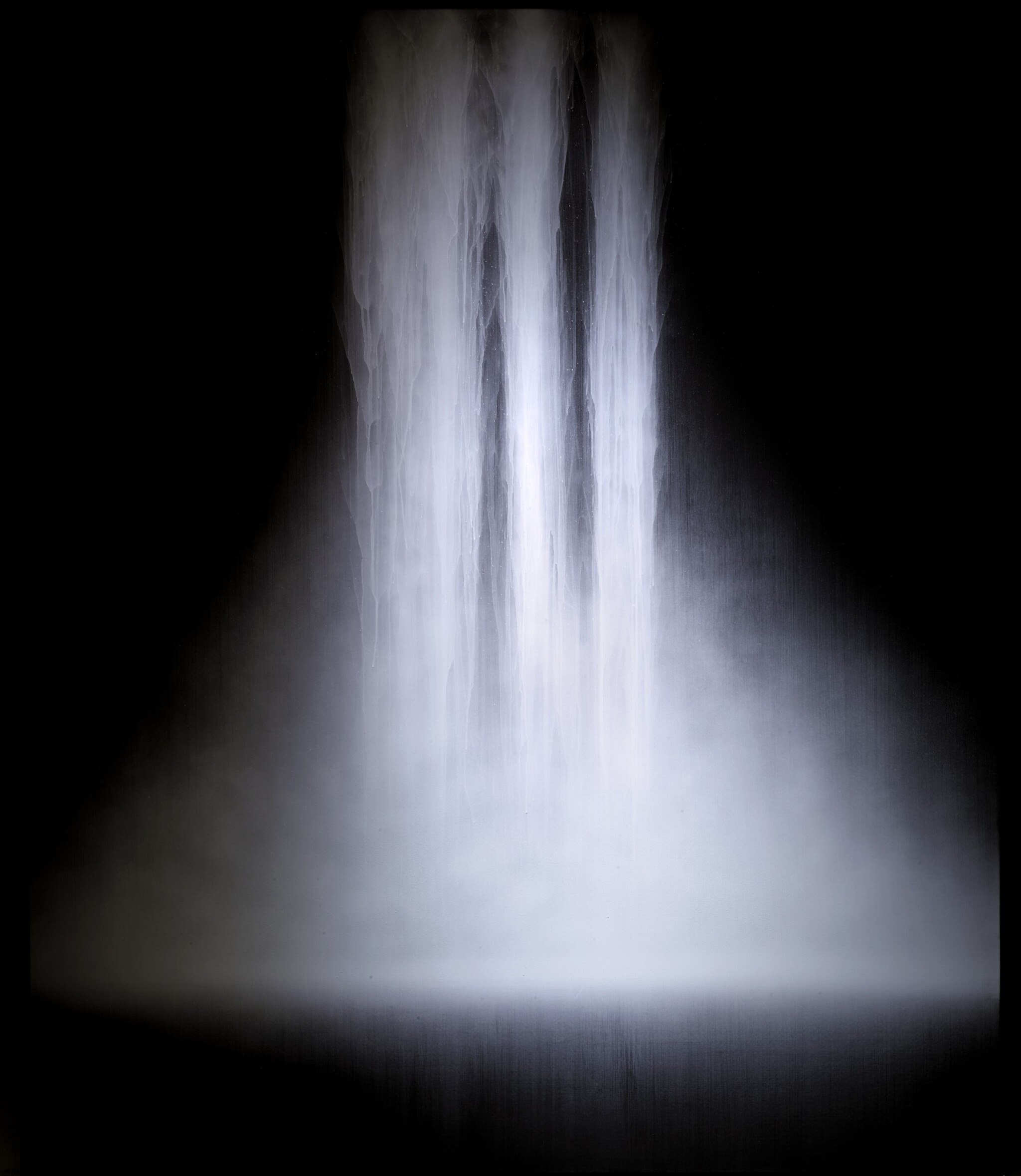 powdered mineral pigments on mulberry paper (washi), mounted on board, signed to the reverse H. Senju, titled as above, dated 2008, framed

Senju Hiroshi (b. 1958) is a Japanese-born New York painter noted worldwide for his sublime waterfall and cliff images often presented in a monumental scale. He combines a minimalist visual language rooted in Abstract Expressionism with elements of traditional Japanese painting.

Senju began exploring the waterfall image in the early 1990s. He seamlessly combines traditional Japanese techniques and materials such as pigments made from minerals, ground stone, shell and corals. By pouring the translucent paint onto mulberry paper mounted on board, he creates a sensation of unrestrained movement evoking a deep sense of calm. His waterfalls conjure the appearance, sound, smell and feel of rushing water. Waterfall (2008) is one of his earlier experiments with fluorescent pigments, a medium he first explored in 2007. These images appear black and white in daylight but fluoresce an electric blue under ultraviolet.

Senju was the first Asian artist to receive an Honourable Mention Award at the Venice Biennale (1995). Subsequently he was awarded the Foreign Minister’s Commendation from the Japanese government for contributions to art in 2017, and in the same year, he was honoured with the Isamu Noguchi Award.

His works are exhibited worldwide in major museums, public, and sacred places such as: The Benesse Art Site of Naoshima Island, Kongobuji Temple at Koyasan (UNESCO World Heritage Site and sacred Buddhist monument), The Metropolitan Museum of Art and The Brooklyn Museum, New York; the Los Angeles County Museum of Art and the Museum of Contemporary Art, Los Angeles; the Asian Art Museum, San Francisco; the Nelson-Atkins Museum of Art, Kansas City, Missouri; the Royal Ontario Museum, Toronto; the Museum of Modern Art, Toyama, Japan; the Yamatane Museum of Art, Tokyo; Tokyo University of the Arts; and the Kushiro Art Museum, Hokkaido. The Hiroshi Senju Museum Karuizawa in Japan opened in 2011.

For a different example of the artist’s Waterfall series painted on a pair of six-panel screens in the collection of the Metropolitan Museum of Art (The MET), New York, go to: