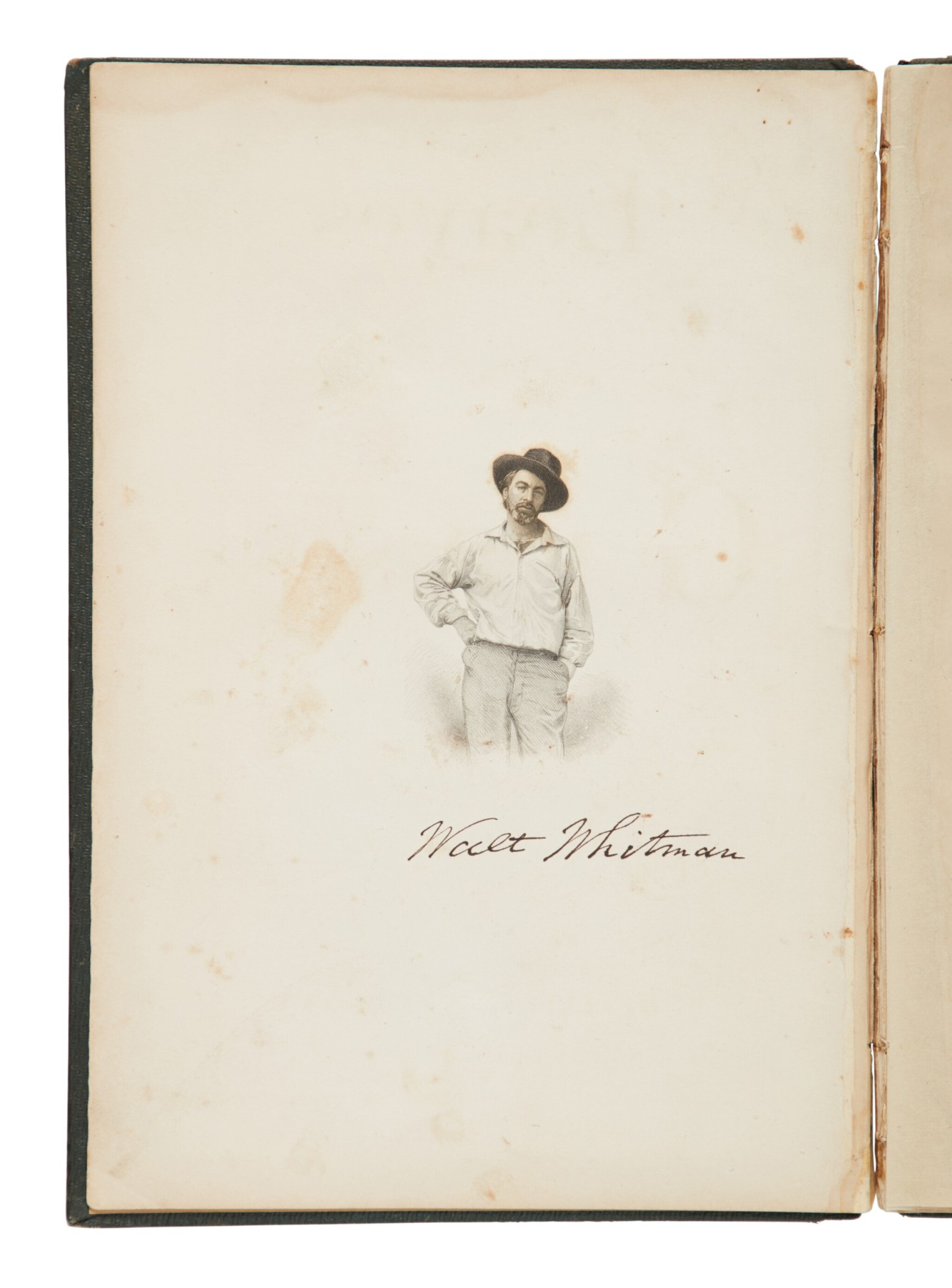 Leaves of Grass. Brooklyn: [For the author by Andrew and James Rome,] 1855

A first edition of Leaves of Grass, signed by Walt Whitman

“This is thy hour O Soul, thy free flight into the wordless,

Away from books, away from art, the day erased, the lesson done,

Night, sleep, and the stars.”

This copy is in the second binding, lacking the more elaborately gilt stamping to cloth, the marbled endpapers and gilt edges of the first binding (evidently in an effort to lower the cost of the self-published work as his resources dwindled). Of the 795 copies comprising the first edition and printed on the small handpress of the Romes in Brooklyn, there were 262 issued thusly.

"The publication of Walt Whitman's Leaves of Grass in July 1855 was a landmark event in literary history. Ralph Waldo Emerson judged the book 'The most extraordinary piece of wit and wisdom America has yet contributed,' saying that it had 'the best merits, namely, of fortifying and encouraging.' … One need not discount his later poetry in order to recognize the specialness of the first edition. This was the original Whitman; this was Whitman at his freshest and, arguably, his most experimental. Nothing like the volume had ever appeared before. Everything about it—the unusual [binding] and title page, the exuberant preface, the twelve free-flowing, untitled poems embracing every ream of experience—was new" (Reynolds).

Worcester Academy acquired this copy in 1911, as part of a bequest by John Savary, class of 1852. Savary had served as an Assistant in the Library of Congress from 1871 until his retirement in 1897, thereafter devoting his retirement to scholarship and collecting.

Where Savary acquired his copy of Leaves is unknown, but alongside his ownership signature on the endpaper is a penciled note "Oct 12 1887 autograph written," which provides us the date Whitman put his bold signature under his portrait of some thirty years before. It is possible that Savary obtained this directly, certainly the lightly penciled comments by him throughout the work suggest a close and appreciative reading. However, getting the author to sign this, the earliest of the editions and not one of the many later revised versions, was no small feat given that Whitman seem to prefer to give attention to the contemporary editions of the poem.

Indeed, first edition signed copies of this cornerstone of American literature are truly scarce. The auction records note only two copies in 30 years: the wonderful example inscribed by Whitman and Oscar Wilde to John Boyle O'Reilly (Christie's New York, 17 May 1989, lot 248, $35,000), and then the Skiff - Doheny (Perryville) copy, with the inscription torn away and only a block printing of the author's name, presumably in his hand, remaining to bestow any association.

We know of one other in private hands, signed similarly beneath the frontispiece portrait.