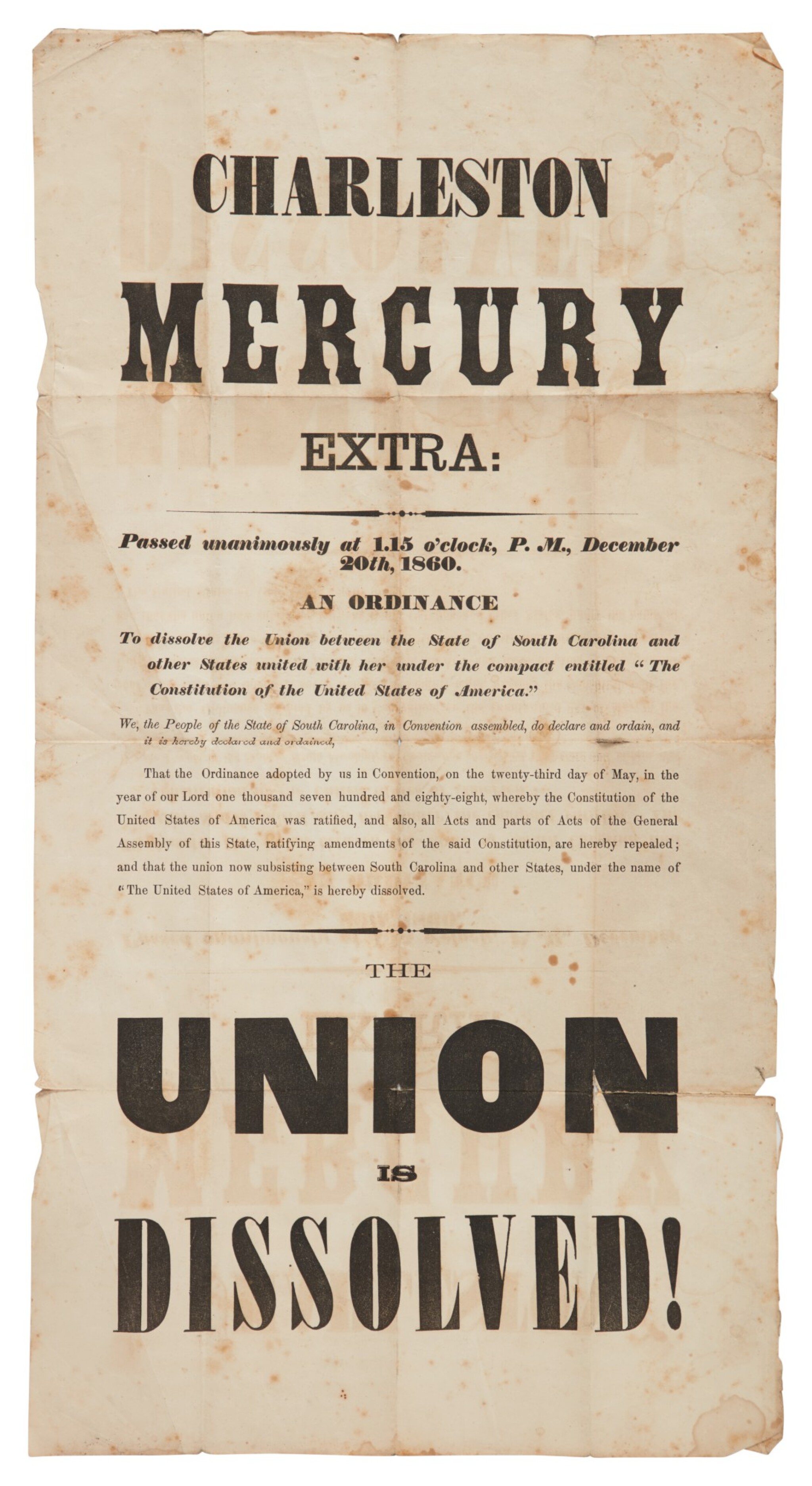 Charleston Mercury Extra: Passed unanimously at 1.15 o'clock P.M., December 20th, 1860. An Ordinance To dissolve the Union between the State of South Carolina and other States united with her under the compact entitled "The Constitution of the United States of America." … The Union is Dissolved! [Charleston: office of the Charleston Mercury, 20 December 1860]

South Carolina was the keystone state of the states' right and secessionist movements; nearly a decade before the present ordinance was issued, South Carolina abandoned a secessionist effort only because no other states were yet ready to ally with her. But the looming inauguration of Abraham Lincoln galvanized the state into action, and on 20 December 1860, a special Secession Convention called by Governor Francis W. Pickens convened in Charleston. The 169 delegates voted unanimously to adopt this terse ordinance, repudiating the state's ratification of the Constitution some seventy-two years earlier:

"We, the People of the State of South Carolina, in convention assembled, do declare and ordain, and it is hereby declared and ordained, That the Ordinance adopted by us in Convention, on the twenty-third day of May, in the year of our Lord one thousand seven hundred and eighty-eight, whereby the Constitution of the United States of America was ratified, and also, all Acts and parts of Acts of the General Assembly of this State, ratifying amendments of the said Constitution, are hereby repealed; and that the union now subsisting between South Carolina and other States, under the name of 'The United States of America,' is hereby dissolved."

The present broadside was the initial and principal format by which South Carolina's resolution to dissolve the United States was made known to her citizens. According to J. F. Rhodes's turn-of-the-century History of the United States from the Compromise of 1850 to the Final Restoration of Home Rule at the South in 1877, this "Extra" broadside-issue of the Charleston Mercury was printed within fifteen minutes of the vote to adopt the Secession Ordinance. South Carolina's preemptive action inspired many of her neighbors, and by the first of February 1861, South Carolina had been joined in rebellion by Mississippi, Florida, Alabama, Georgia, Louisiana, and Texas. After the Union surrender of Fort Sumter, Virginia, Arkansas, North Carolina, and Tennessee also seceded.

As a contemporary announcement of a significant moment in American history, the "Charleston Mercury Extra" has few peers.