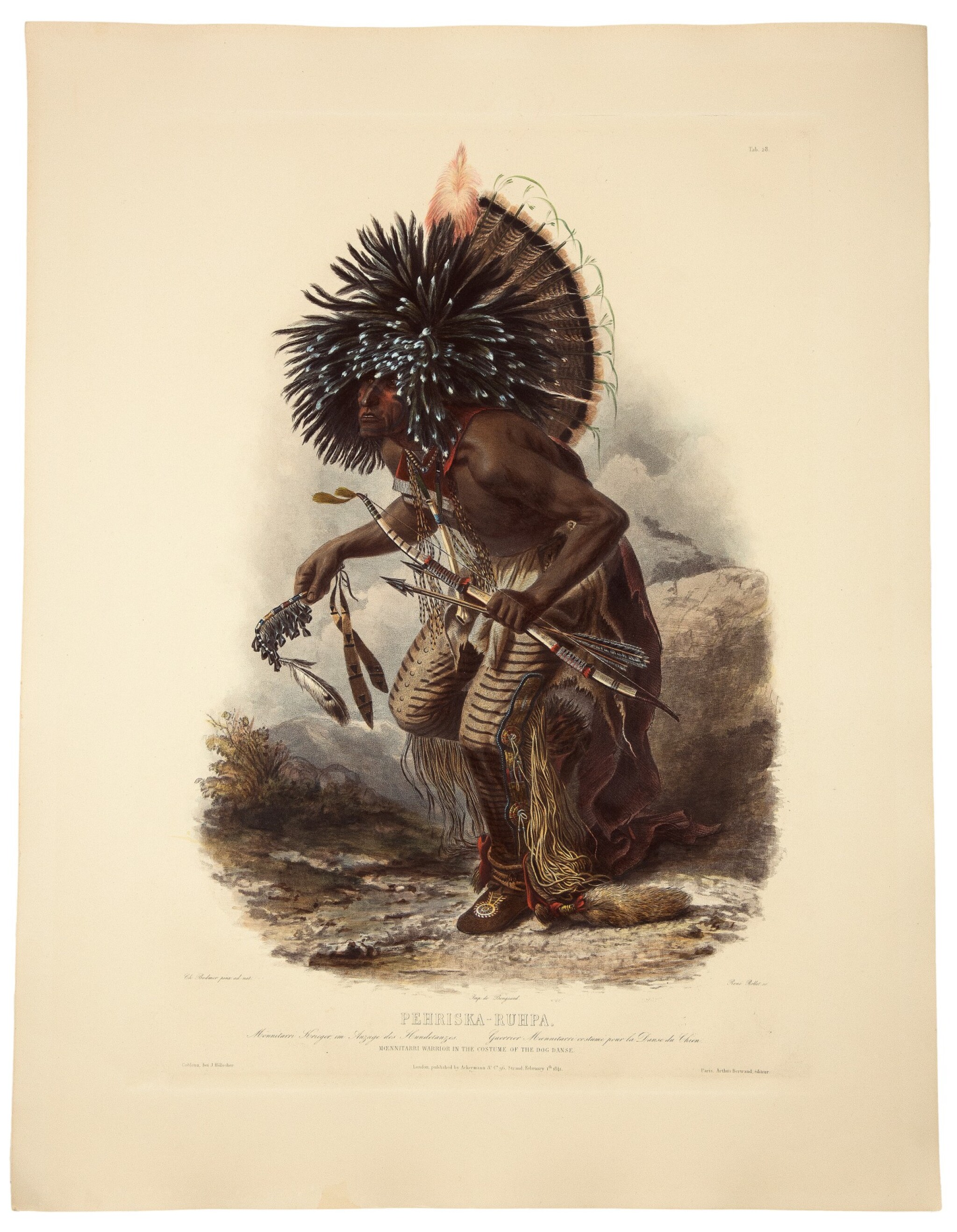 Péhriska-Rúhpa. Moennitarri Warrior in the Costume of the Dog Danse. [Tab. 23]. [Leipzig: Schmidt and Guenther, 1922]

From the scarce Leipzig edition, printed from the original copper-plates.

Perhaps the greatest image to emerge from the picturing of the American West, and certainly Bodmer's most famous, this highly-charged portrait of Péhriska-Rúhpa ("Two Ravens") presents the warrior and chief of the Hidatsa in way that encapsulates the vanished era of the Plains Indian. The portrait has a great sense of immediacy, intensity, of noise and movement. Péhriska-Rúhpa dances in his regalia as a principal leader of the Dog Society of his village. The white tips on the glossy black feathers of the headdress indicate the attachment of a tiny down feather to the point of each plume. The central vertical plume is painted red. Dyed horse hair floats from colored sticks attached to the shafts of the turkey feathers.

The Dog Society was one of seven such societies among the men of the Mandan and Hidatsa Tribes. They were one of the main tenets by which Hidatsa society lived. As an individual progressed through life, it was necessary for him to purchase his entry into successive societies, starting with "the foolish dogs" at about ten to fifteen years of age, and graduating to the society of the black-tailed deer for men over fifty. The Dog Society was the fourth of these progressions. Each society had a set number of members, so that an individual from a lower society could only buy entry to the higher society if there was a member of that society who was himself ready to move to the society above his. They each had individual rules, rituals, dances, and regalia. All this information was carefully recorded by Prince Maximilian during the travelers' winter stopover at Fort Clark in 1833-1834. This portrait, Bodmer's masterpiece, was painted in March 1834 towards the end of this stay.

Limited in number, the prints from the Leipzig edition are more scarce than, and compare favorably to, the first edition (Hunt).