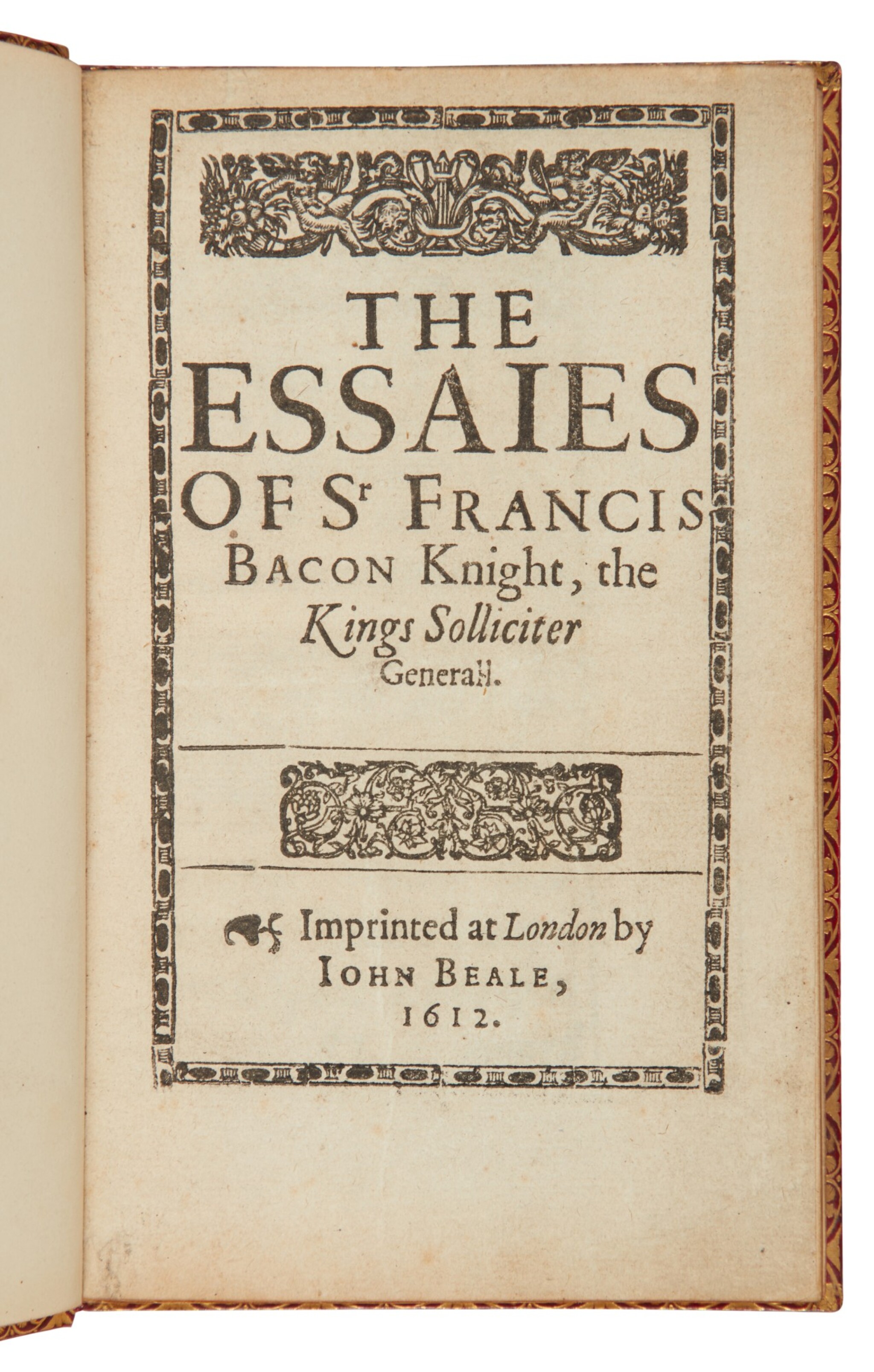 8vo (159 x 95 mm). A-Q7 in eights, title on A2 with woodcut vignettes, Ai is a blank, wanting, Q8 is a blank, wide lower and fore-edges, woodcut head-pieces and initial; washed and pressed at an earlier date. In full red morocco, spine with raised bands in six compartments, second compartment lettered in gilt, others with repeat motif in gilt, dated in gilt at foot, inside dentelles gilt, all edges gilt, marbled endpapers; very light rubbing to spine bands, head, foot, and at corners.

An exceedingly rare volume, with the exceptional provenance of Henry Huth

The enlarged edition, “Dedicated to my loving brother, Sr. John Constable Knight,” Bacon's brother-in-law. In the interval between the appearance of the second edition in 1598 and the present one, the author had lost his own brother, Anthony, to whom the previous edition was dedicated. Bacon here takes no notice of the pirated edition printed by William Jaggard in 1606. While the table of contents lists forty essays, there are in fact only thirty-eight, with “Of the Publike” and “Of Warre and Peace” not appearing. The “Meditations” and “Colours of Good and Evil” were also omitted, but appear in Jaggard’s edition of the same date. "This edition ranks with the first of 1597 and the 'complete' of 1625 as one of three editions which provide the authoritative text" (Pforzheimer).

The present copy belonged to Henry Huth and was last offered at auction in the the sale of his library at Sotheby, Wilkinson, and Hodge in 1911. The catalogue for the Huth sale listed this copy as “extremely rare,” and we trace only three other copies of this edition offered at auction in the past fifty years. The final leaf features a collation inscription reading "Perfect" from J.S. Ingram, and "B. Quaritch" in pencil.

The Essaies were originally circulated as a manuscript among Bacon's friends—though he ultimately gave the work to Humfrey Hooper for publication in 1597 in an attempt to avoid a pirated edition. They have famously been argued to be the birth of the essay form in English, and their styles are as wide-ranging as their topics. Though a landmark work in numerous regards, Bacon wrote in a letter, "As for my Essays ... I count them but as the recreation of my other studies" (Whately). They would go on to be republished in numerous editions in the author's lifetime, including translations into French and Italian.