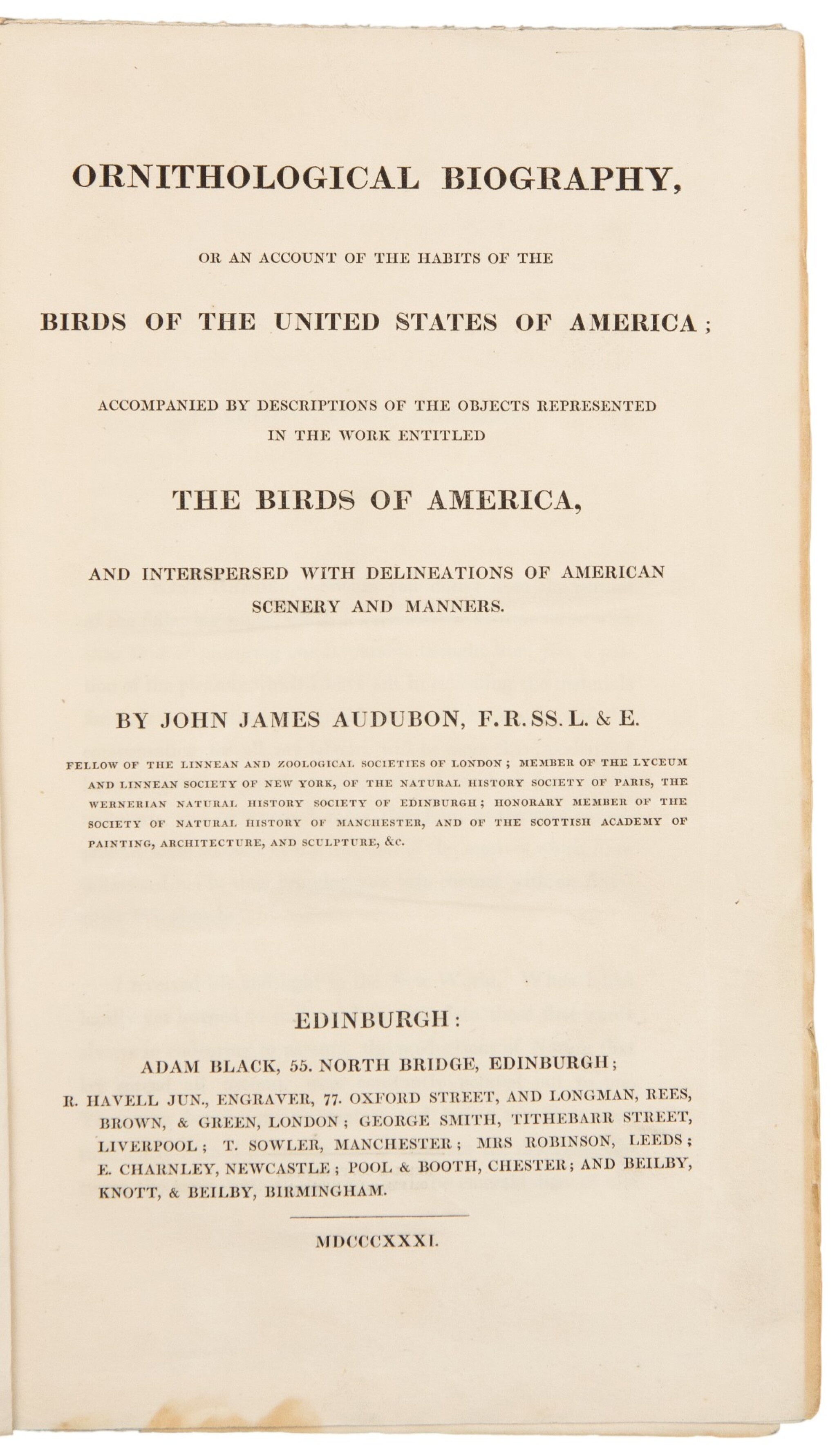 Ornithological Biography, or an account of the habits of the birds of the United States of America; accompanied by descriptions of the objects represented in the work entitled The Birds of America, and interspersed with delineations of American scenery and manners. Edinburgh & London: Printed by Neill & Co. for Adam & Charles Black, and R. Havell Jun., and Longman, Rees, Brown and Green, and various others, 1831-1834-1835 [with New York 1836 overslip on the half-title]-1838-1849 [i.e.1839]

First edition of the separately-issued text for the elephant folio The Birds of America.

As early as November 1826, Audubon had begun thinking about the text that should accompany his engraved illustrations of birds. He noted in his journal: "I shall publish the letterpress in a separate book, at the same time with the illustrations and shall accompany the descriptions of the birds with many anecdotes and accounts of localities connected with the birds themselves ..." Audubon had taken the decision to publish the letterpress separately (and give it free to the subscribers of the plate volumes) because, according to British copyright law, had the letterpress accompanied the engravings, Audubon would have been obliged to deposit a copy of the work in each of the nine copyright libraries in the United Kingdom. This would have placed a strain on the economics of the production of the book.

Work on the text did not begin in earnest until the end of 1830, just as Havell was nearing the completion of the engraving of the first 100 drawings. Between 1831 and 1837, Audubon and his family made three trips to America. Audubon was back in London between 1837 and 1839, where he completed the descriptions of the last two volumes of the Ornithological Biography. On 20 November 1838, Audubon wrote to Bachman: "My fourth Vol. is finished and in 10 days I will have 200 copies of it at London where I hope you will be and receive several Copies to take over with you, for yourselves and others as then directed."

This set with the separately-issued prospectus and list of subscribers for the elephant folio edition, bound into volume one. Unusually, it also contains one of the rare American "copyright" issues of Vol. III.