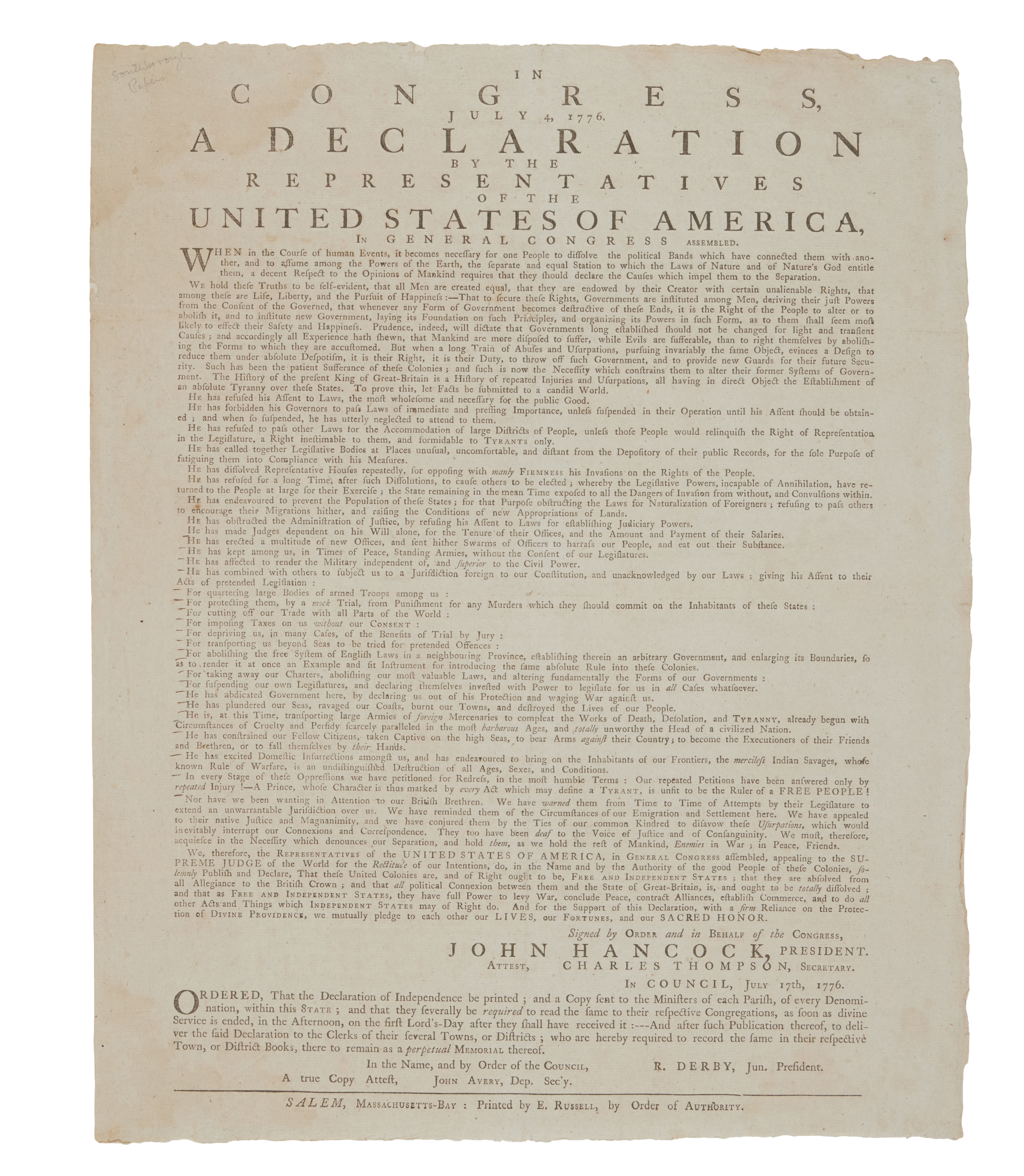 In Congress, July 4, 1776. A Declaration by the Representatives of the United States of America, in General Congress Assembled. When in the Course of human Events, it becomes necessary for one People to dissolve the political Bands which have connected them with another, and to assume among the Powers of the Earth, the separate and equal Station to which the Laws of Nature and of Nature's God entitle them, a decent Respect to the Opinions of Mankind requires that they should declare the Causes which impel them to the Separation. … We, therefore, the Representatives of the United States of America, in General Congress assembled, appealing to the Supreme Judge of the World for the Rectitude of our Intentions, do, in the Name and by the Authority of the good People of these Colonies, solemnly Publish and Declare, That these United Colonies are, and of Right ought to be, Free and Independent States; that they are absolved from all Allegiance to the British Crown; and that all political Connexion between them and the State of Great-Britain, is, and ought to be totally dissolved; and that as Free and Independent States, they have full Power to levy War, conclude Peace, contract Alliances, establish Commerce, and to do all other Acts and Things which Independent States may of Right do. And for the Support of this Declaration, with a firm Reliance on the Protection of Divine Providence, we mutually pledge to each other our Lives, our Fortunes, and our Sacred Honor. Signed by Order and in Behalf of the Congress, John Hancock, President. Attest, Charles Thompson [sic], Secretary. Salem, Massachusetts-Bay: Printed by E. Russell, by Order of Authority, [circa 18–20 July 1776]

A fresh and beautifully preserved contemporary broadside of the Declaration of Independence. This is the authorized printing for Massachusetts, the colony that led the struggle for American Independence from Great Britain.

Ezekiel Russell’s edition of the Declaration of Independence is the eleventh broadside printing overall and either the third or fourth done in Massachusetts, but the present is the colony's authorized edition, printed by order of the Council of the Commonwealth. The text of this resolution, issued over the names of R. Derby and John Avery (president and secretary of the council, respectively) and dated July 17, 1776, is printed on this broadside immediately after the text of the Declaration: "Ordered, That the Declaration of Independence be printed; and a Copy sent to the Ministers of each Parish, of every Denomination, within this State; and that they severally be required to read the same to their respective Congregations, as soon as divine Service is ended, in the Afternoon, on the first Lord's Day after they shall have received it: — And after such Publication thereof, to deliver the said Declaration to the Clerks of their several Towns, or Districts; who are hereby required to record the same in their respective Town, or District Books, there to remain as a perpetual Memorial thereof."

The present copy was sent to the Reverend Nathan Stone in Southborough. The son of a clergyman, Stone was born in 1708 in Harwich, Massachusetts, and trained at Harvard. In 1730—just three years after Southborough officially split off from Marlborough—he accepted the inaugural pulpit of the First Church of Southborough (Congregational) and remained the head of his flock until his death in 1781. Stone was known for the rigor of his beliefs and—to the dismay of the Selectmen of the cash-strapped new town—for his business acumen, negotiating annual raises in his salary, as well as increases in his firewood allowance, as his family grew to seven children.

An obituary in the Boston Gazette described Stone as "remarkable for his integrity and uprightness. … He was an unbigoted Calvinist—his ministerial services were laborious, instructive and satisfying and he was diligent and faithful in discharging the duties of his office to the great acceptance of his people."

In July 1776, on either the 21st or 28th, Stone faithfully discharged the duty that had been directed by the Council's resolution, reading the Declaration from the pulpit to his congregation. Stone would have been 68 at the time, perhaps of failing eyesight, and it was probably him who ticked-off the charges against King George III as he read them in order to help keep his place.

Nor was Stone the only Southborough official to follow the resolution that accompanied the Declaration: the Town Clerk carefully copied "the July declaration into the town records. Across the top of the completed page he then inscribed a single word: INDEPENDENCE" (Richard Noble, Fences of Stone: A History of Southborough, Massachusetts, p. 88).

Ezekiel Russell was a printer and publisher in Salem; he was the publisher of the weekly newspaper The American Gazette, which was "Printed by J[ohn]. Rogers, at E. Russell's Printing-Office." The American Gazette published the text of the Declaration in its 16 July issue. Russell printed two issues of this broadside: the present authorized version, and a second, commercial issue with the nine lines of heading shifted right to allow space for two crude woodcut medallion profile portraits and with an expanded imprint (“Sold at the Printing-Office, Upper End of Main-Street: Where all Friends to the Liberties of America, who incline to purchase the above Declaration to preserve in their Houses to Futurity, may be supplied very cheap either by Wholesale or Retail”). This second issue (Sotheby's checklist 11b) is unrecorded by Walsh, Evans, or Bristol; the sole copy known is in the Massachusetts Historical Society.

In the July 23 issue of The American Gazette, Russell printed a note apologizing for the fact that he was "giving the Public but Half a Sheet this Week; at the same Time he doubts not they will cheerfully excuse him as some Work of Importance to the State was doing in the Office on Saturday Last"—the "Work of Importance to the State" was undoubtedly the present official broadside of the Declaration. Based on the arrangement of the headlines and the type sorts employed, Walsh speculated that Russell was also the printer of a four-column broadside of the Declaration issued without imprint, but our catalogue for the copy of that edition in the James S. Copley Library proved that this edition (Sotheby's checklist 10; Walsh 12) was in fact printed by Russell’s journeyman printed John Rogers (see "The James S. Copley Library: A July 1776 Broadside Printing of the Declaration of Independence", June 17, 2010).

The text of the Declaration was first published in an elegant broadside printed by John Dunlap on the evening of July 4, 1776, and into the morning of July 5. A congressional resolve ordered "That copies of the declaration be sent to the several Assemblies, Conventions & Committees or Councils of Safety and to the several Commanding Officers of the Continental troops that it be proclaimed in each of the United States & at the head of the army." But despite its wide distribution, the Dunlap Broadside did not entirely fulfill the intense demand of tens of thousands of Americans for copies of the Declaration of Independence.

As copies of Dunlap's first printing were distributed throughout the thirteen colonies, they were used as copy texts by other, local printers, who produced their own broadside editions, some in response to the resolutions of local legislative bodies and some simply to fulfill the public hunger for the Declaration. Including the Dunlap printing, thirteen broadside editions of the Declaration of Independence were printed during July and August 1776. Broadside editions were printed in Pennsylvania, New York, Rhode Island, Massachusetts, New Hampshire, and South Carolina. (Five of the broadside editions did not identify their printer or place of publication, but were likely also produced within these six states.) Even more than the Dunlap first broadside, the contemporary regional printings of the Declaration were utilitarian and intrinsically ephemeral productions; as a result, they all survive in very few numbers.

Perhaps because it was an official printing, Russell’s broadside has, next to the first, Dunlap printing, the highest survival rate of any of the contemporary printings. But, although twenty copies are recorded, only three of these are in private hands. Apart from the treatment of headlines and display types (as well as some variations in spelling, punctuation, and capitalization: Russell, for example, prefers "Connexions" and "Connexion" to Dunlap's "Connections" and "Connection"), Russell's broadside is closely modelled on the Dunlap printing, which undoubtedly served as his copy text.

A brilliant July 1776 printing of the Declaration of Independence, Thomas Jefferson's supreme "expression of the American mind."