Property from a Japanese Private Collection 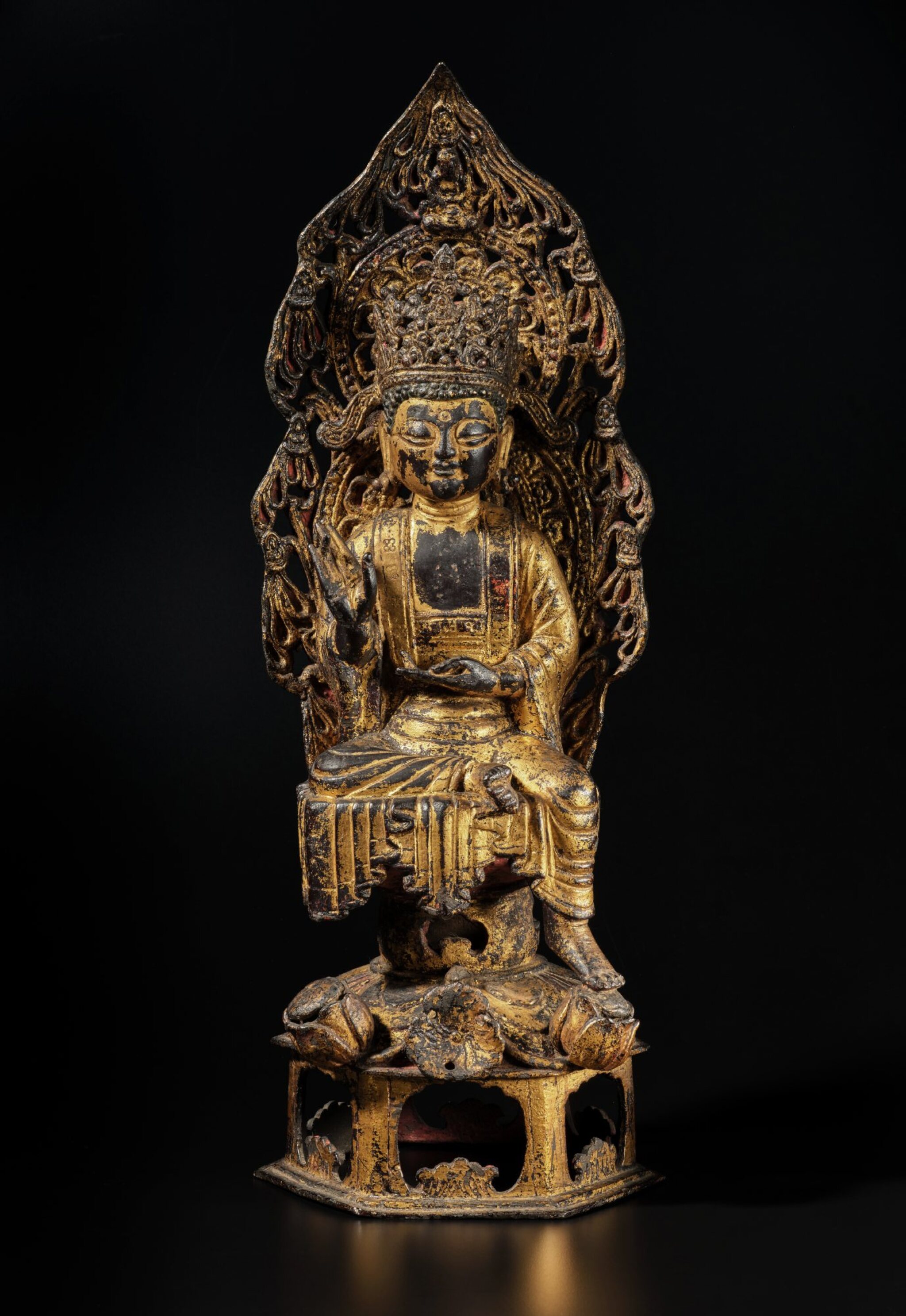 Property from a Japanese Private Collection

A large gilt-bronze figure of a bodhisattva

The figure is in overall good condition. As visible in the photos, there is extensive oxidization. Typical wear and rubbing to the gilding.

For more information on and additional videos for this lot, please contact Eleanor.Jahrling@sothebys.com.

This rare large gilt-bronze bodhisattva, well preserved and complete with its original pointed and pierced mandorla, was probably created at the dawn of the Joseon dynasty (1392-1910), but encapsulates the restraint, simplicity and refinement of the aesthetics of the Goryeo dynasty (918-1392). The fall of the Tang dynasty (618-907) in China had repercussions throughout the Korean peninsula. In 918, the Unified Silla dynasty (668-935) gave way to the Goryeo dynasty, which was characterized by a certain freedom from hierarchy and authoritarianism. In Buddhist art, this can be seen in a much more flexible, fluid approach to sculpture, as well as a real concern for realism and humanization.

The current bodhisattva appears to represent Avalokiteshvara, and would originally have been placed on the left of an Amitabha triad, with the bodhisattva Ksitigarbha on the right. It is rare to find a gilt-bronze figure of a bodhisattva of this large stature. For another seated gilt-bronze figure of a bodhisattva, see a smaller (16cm high) figure of Mahasthamaprapta in the collection of the Horim Museum, Seoul (accession no. 1047), attributed to the late 14th century. A closely related figure of Ksitigarbha is also illustrated in Korai Richi no bukkyo bijutusu-den [Study of Korean Koryo-Dynasty Buddhist Art], Yamaguchi Prefectural Museum, Yamaguchi, 1998, cat. no. 48. For a complete bronze Amitabha triad from the Joseon dynasty, see the example formerly in the Worcester R. Warner Collection and now in the Cleveland Museum of Art (accession no. 1918.501), illustrated by So-young Lee et al., Art of the Korean Renaissance, 1400-1600, Metropolitan Museum of Art, New York, 2009, cat. no. 13.

The dating of this lot is consistent with the results of a thermoluminescence test, Oxford Authentication Ltd., no. N100u62.