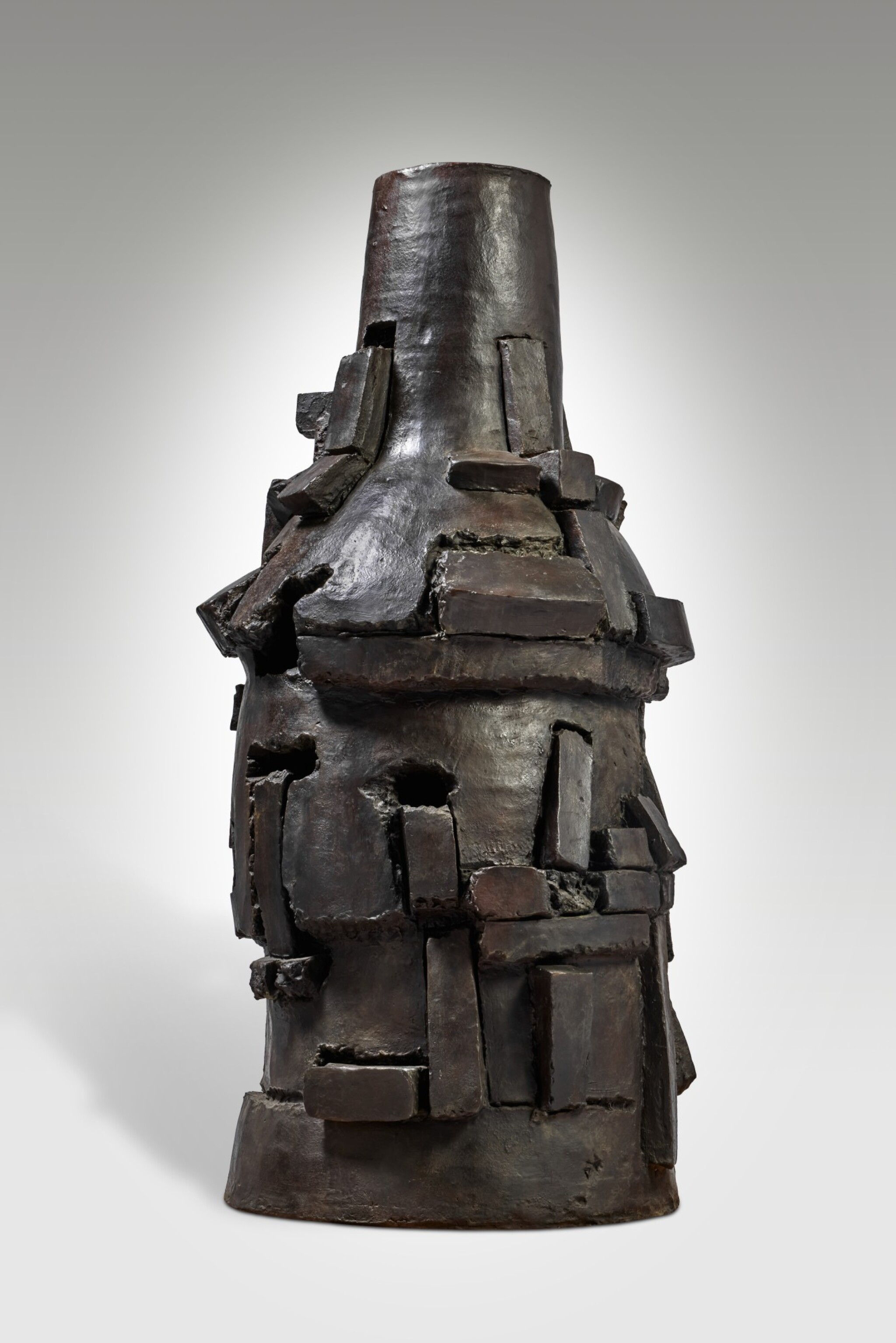 number 2 from an edition of 5

Overall in very good condition. When viewed firsthand this monumental vessel displays a highly textured surface and variegated hues ranging from charcoal gray to reddish brown. The patinated bronze surfaces throughout present with irregularities inherent to casting and the artist’s technique, as well as some occasional areas of light rubbing and discoloration to the patina. The patinated bronze surfaces present with faint scattered surface scratches, minor abrasions and light scuffing particularly concentrated to the base as consistent with gentle handling and light surface soiling concentrated to the recessed contours of the design.

Voulkos Family Trust
Private Collection
Rago Auctions, Lambertville, New Jersey, June 14, 2014, lot 400
Acquired from the above by the present owner
Voulkos: The Breakthrough Years, exh. cat., Museum of Arts and Design, New York, 2016, p. 84 (for a related example)
When Peter Voulkos first worked with bronze, in 1959, it was – he later said – “a matter of convenience.” That tells you a lot about where he was coming from. Few sculptors then would have seen bronze casting, just then being experimentally rediscovered in independent foundries, as a path of low resistance. But then, Voulkos had just made the most titanic works of his career – a series of totemic sculptures like Sitting Bull and Little Big Horn, which still rank as the most important of all modern ceramics.1

He’d arrived at those herculean achievements in a studio on Glendale Boulevard, shared with John Mason, which had an impressive infrastructure for making: a walk-in kiln, industrial mixers and humidity control. When Voulkos was fired from the Otis Art Institute for general recalcitrance, and moved up to the Bay Area to teach at Berkeley, he was abruptly cut off from this facility and needed to find a new productive pathway. This was where bronze casting came in: a group led by Donald Haskins had set up the Garbanzo Works, and he was able to immediately begin creating sculpture there. This led swiftly to a body of work constructed from cylindrical, spherical and cubic forms, like giant Tinkertoys. While he never entirely stopped working in clay, Voulkos’s enormous artistic energies would be focused on bronze for most of the next decade.

So it was in the nature of a return when Voulkos began collaborating with Artworks Foundry (the same facility that made Judy McKie’s bronzes) in 1986. Now he had different priorities. In the ensuing years, he had developed a few key typologies in his ceramic work, of which the most famous is the “stack” – a veritable mountain of clay, rammed full of constructive incident, culminating in a cylindrical top. These works retain a nominal basis in the vessel form, but transcend it through sheer scale and power; they inhabit a room with geological presence.

Anasazi – the name alludes to the Ancestral Puebloan people, masters of pottery in their own right – is a casting of one of these ceramic stacks, which was fully eleven years old when Voulkos recreated it in bronze. Rather like anagama wood firing (a process that he undertook mainly with Peter Callas), casting was a way to open up his practice beyond the studio. The inherent monumentality of the metal, and the patination that the foundry added, imbues the work with tremendous gravitas, rivaling the best of what he made in clay.