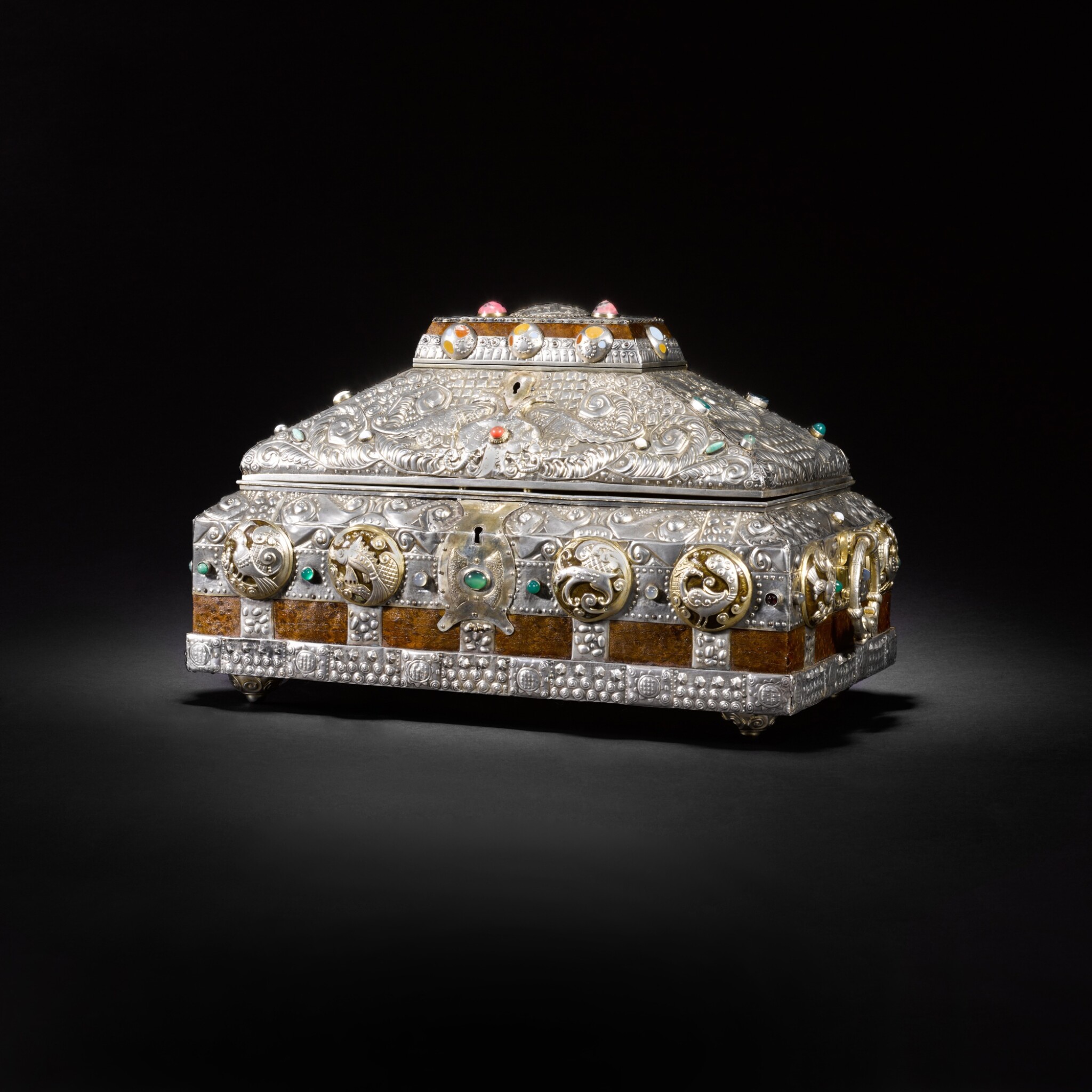 in the neo-Russian style, the rectangular bird's-eye maple body with repoussé and finely chased silver mounts, set with thirteen circular roundels each containing a chased and engraved stylised animal, the front of the hinged cover chased and engraved with two large peacocks and scrolls, the lower mount with stylised depiction of the sun and scrolls at intervals, with two compartments, both with key holes and set throughout with large cabochon gems including amber, rhodonite, lapis lazuli, garnets and jasper, on four bun feet, the interior fabric-lined, struck throughout with maker's mark and initials in Cyrillic and the Imperial Warrant, 84 standard

Excellent condition overall. A small crack and chip to three of the gems, a chip to the ochre enamel on one roundel at the front of the casket.

In the late 19th century, cities throughout Europe began blossoming into metropolises prompted by the boom in industrialisation. In reaction to this rapid modernisation that was taking over not only Russia’s metropolises but also those around Europe, artists began reviving medieval art and literature. In Britain, the Pre-Raphaelites replicated the folklore around King Arthur and the Knights of the Round Table, as well as fairy tales such as Briar Rose. French artists, architects and craftsmen reverted to the glory of Louis XV’s, and Norway represented tales of their Viking ancestors. Moscow too became a flourishing centre of industrialisation, and the artist colony of Abramtsevo and the Talashkino school countered this by reviving Pan-Slavic art based on fairy tale and myth.

The Russian aristocracy were enchanted by these Romantic creations – especially those representing bogatyrs – and so they ‘“resurrected”, studied and tried to recreate their environments, costumes and jewellery’ (U. Tillander-Godenhielm, Smycken: Från det Kejserliga St Petersburg, 1996, p. 164). Similarly, there grew an appetite for silver and enamels in this revival style, for which the renowned firms of Khlebnikov, Ovchinnikov and Fabergé catered.

Recognition of these firms’ work spread throughout Europe. As Anne Odom writes, ‘The pride of Russian silversmiths – Ovchinnikov, Khlebnikov, Grachev, and others – won prizes at All-Russian and international exhibitions, with their Old-Russian style. In addition to numerous medals at All-Russian exhibitions, Ovchinnikov and Khlebnikov each won Gold Medals in Paris in 1889’ (exhibition catalogue, Walters Art Gallery & Hillwood Museum, ed. A. Odom, Russian Enamels, 1996, p. 107).

Adorned with finely chased and repoussé imperial double-headed eagles, mythological creatures and large cabochon gems and hardstones, the present casket is exemplary of Khlebnikov’s impressive creations during this period.