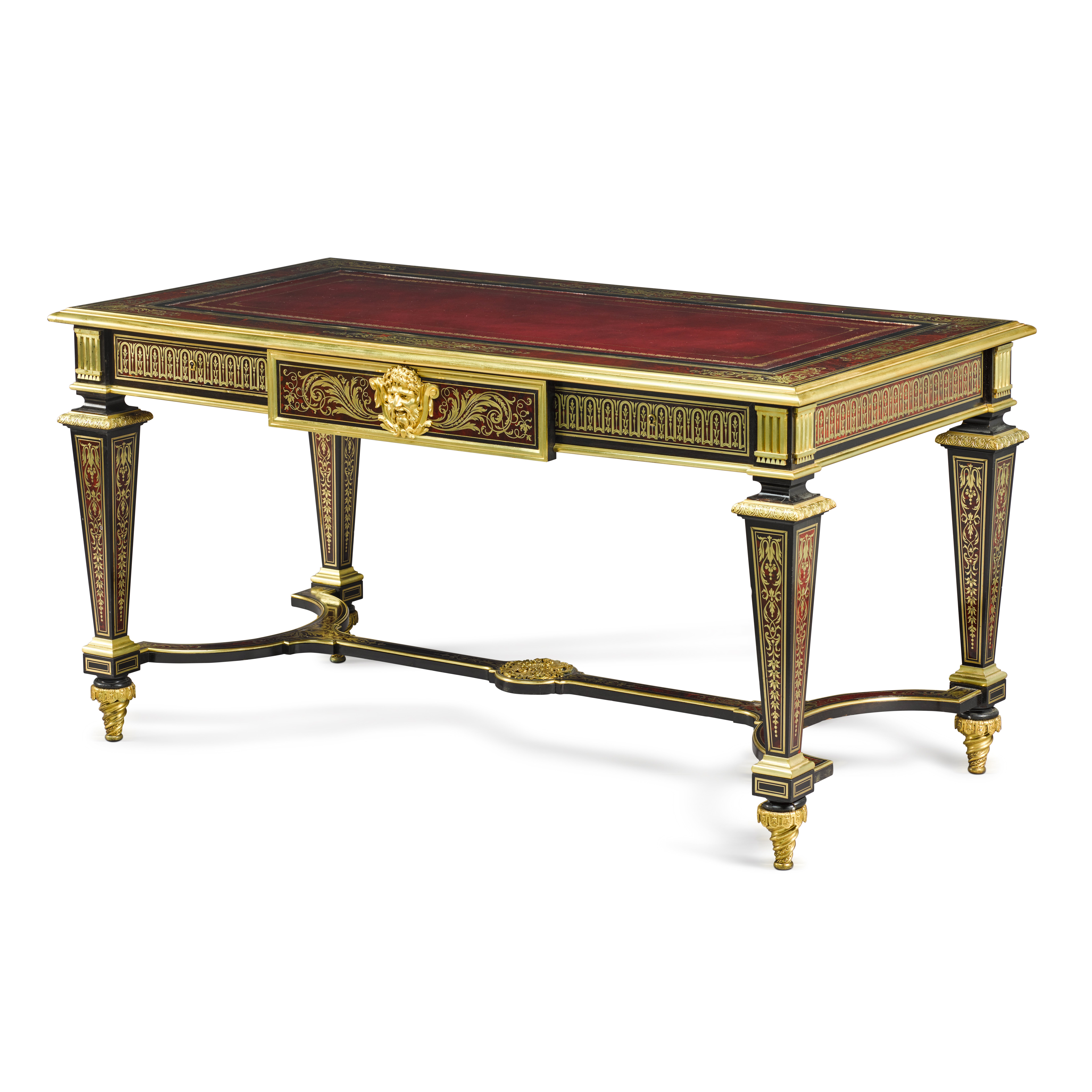 the top centred with a later gilt-tooled red leather inset, with three drawers to one side, signed Henry Dasson 1879 to one corner

In overall very good conserved condition. One ring to a feet with a loss; another one cracked. With a removable protective glass top. Excellent quality of craftsmanship. One key.

This lot contains endangered species. Sotheby's recommends that buyers check with their own government regarding any importation requirements prior to placing a bid. For example, US regulations restrict or prohibit the import of certain items to protect wildlife conservation. Please note that Sotheby's will not assist buyers with the shipment of this lot to the US. A buyer's inability to export or import these lots cannot justify a delay in payment or sale cancellation.

This elegant bureau plat by Henry Dasson is an original piece of furniture blending the Louis XIV style and the ‘Boulle’ marquetry’ technique while also demonstrating the luxurious appeal and unprecedented forms that Parisian cabinetmakers achieved in the 19th century as a continuation of André-Charles Boulle’s work. It was clearly executed by skilled hands that created a furniture piece indicative of the excellent skills reached by Parisian cabinetmakers in the late 19th century. Unsurprisingly this is the work of no other than the celebrated French cabinetmaker Henry Dasson (1825–1896) who indeed stamped and dated the present.

The Boulle marquetry technique has been admired for more than three centuries and remains an undisputed essence of the French style desired by Louis XIV and it has become inseparable from the name of André-Charles Boulle. A famous cabinetmaker of Louis XIV, living in the Louvre from 1672, Boulle is credited for the technique which consists of assembling thin sheets of different materials - usually copper and tortoiseshell, but also brass, pewter or horn. Using a marquetry saw, these sheets are layered and the patterns cut out. In the end, the cabinetmaker obtains as many patterns and backgrounds as there are stacked sheets. He painstakingly reconstructs the designs using the different textures. The first marquetry obtained, known as the première partie, is usually metal on a tortoiseshell background, while the second, has a tortoiseshell pattern on a metallic background: this is the contre partie. Combining technical skill with an acute aesthetic sense, André-Charles Boulle developed an opulent decorative vocabulary, able to satisfy the expectations of a demanding monarch and aristocracy.

The designs of Boulle’s inventions were influenced by his neighbour at the Louvre, Jean I Bérain (1640-1711) but also by the French designer Daniel Marot (1661–1752). Grotesques ornaments and stylised foliage thus became the decorative hallmarks of Boulle marquetry furniture pieces.

Elements of the present bureau plat can be identified in Louis XIV furniture pieces and especially those by André-Charles Boulle: for example on a coffer-on-stand attributed to Boulle’s workshop at the JP Getty Museum (82.DA.109.1) using the same type of supports and marquetry inlays as well as on a table by Boulle at the Legion of Honor Museum, San Francisco or indeed for Louis XIV bureau mazarin and centre tables featuring stretchers. The twisted feet are seen, for example, on a meuble d’appui attributed to Boulle at the Musée du Louvre (OA 5453) and the same feet as the present can be seen used in the 19th century for a meuble d’appui sold at Sotheby’s, New York, 24 October 2007, lot 138. The egg and dart frieze with stylized foliage of this bureau with alternating stylized foliage can be seen in Boulle’s work, for example on a centre table at the JP Getty Museum (71.DA.100).

Whilst these elements are inspired by Boulle’s work, they are executed by Dasson in a meticulous manner and he is to be admired for the skills he shows off through this elegant bureau plat. And some similar features reappear in his work, namely with a centre table also dated 1879 with similar legs and marquetry inlays sold at Sotheby’s, Amsterdam, 29 October 2008, lot 267 and another centre table, also stamped, and again with similar supports and inlays sold at Sotheby’s, New York, 14 April 2008, lot 98.

Henry Dasson was one of the leading French cabinetmakers of the 19th century continuing in the tradition of the great 18th-century Parisian ébénistes producing case furniture veneered in tropical woods or lacquer of the highest quality mounted in gilt bronze. He began his career as a clockmaker and bronze manufacturer and turned to cabinetmaking in earnest in 1871 with the acquisition of the workshop and remaining stock of the late ébéniste Charles-Guilluame Winckelsen (1821-1871). He participated in the Paris Exposition Universelle of 1778 where he exhibited a copy of the celebrated Bureau du Roi by Oeben and Riesener and was praised for having created 'par la perfection de ses oevures une très haute situation à laquelle nous applaudissons chaleureusement'. In 1883 he was named Chevalier de la Légion d'Honneur and in 1889 raised to the title of Officier following his successful participation in the 1889 Exposition Universelle, where he exhibited furniture in the Louis XIV, XV, and XVI styles.