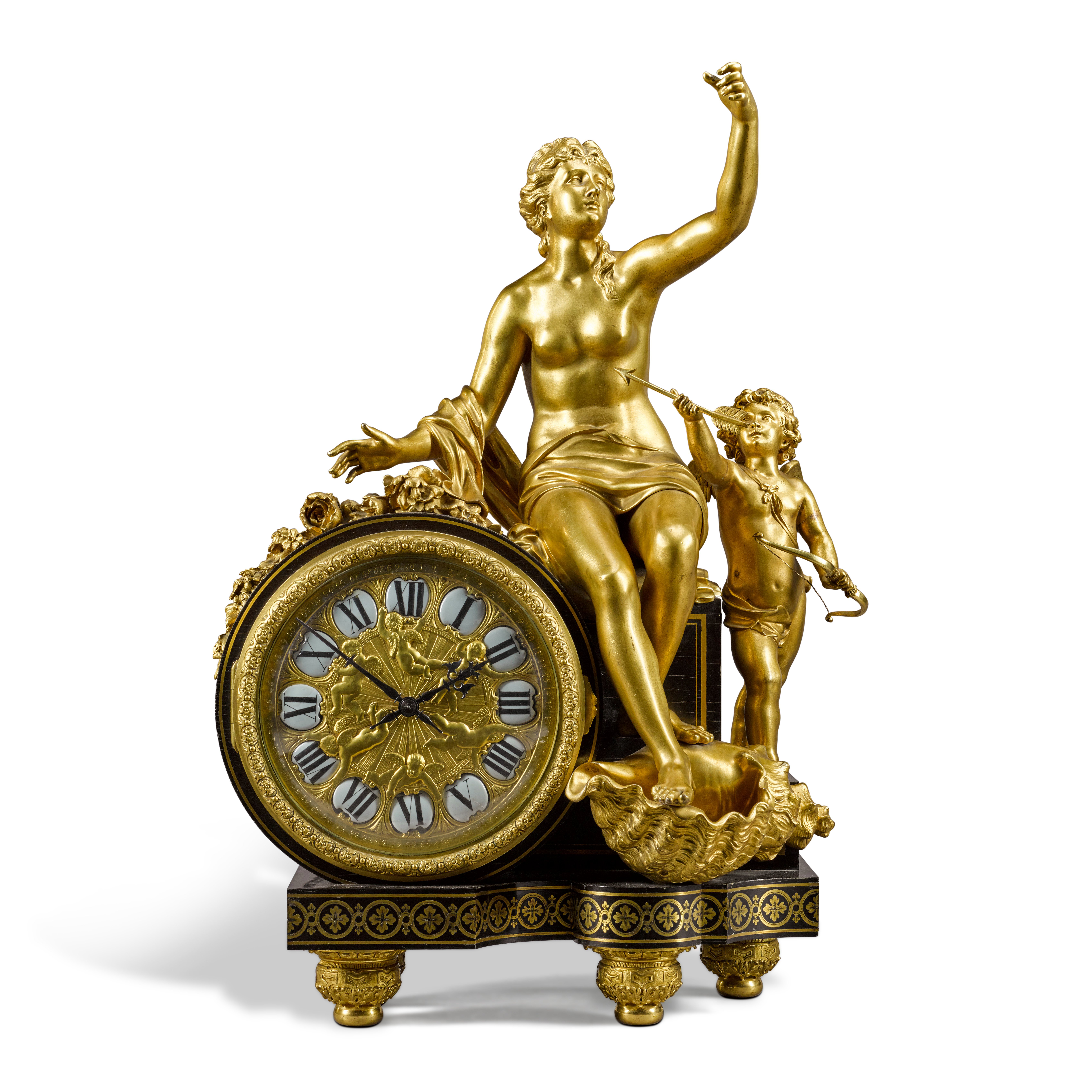 After the model by Andre-Charles Boulle.

9½-inch gilt dial cast with putti and inset with enamel cartouche numerals, the movement with Brocot escapement and suspension, striking on a bell (bell lacking), the rear door piered and engraved with leaves and scrolls, the drum mounted beside figures of Venus and Cupid with a conch shell, the shell signed and dated to the rear Henry Dasson et Cie 1892, on a shaped plinth inlaid with boulle marquetry, on cast and turned feet

This fine clock is a copy of one the original models attributed to André-Charles Boulle (d. 1735), now in the Wallace Collection. It is believed to be one of three known clocks. The attribution to Boulle is based on the 1715 acte de délaissement to his four sons stating: 'Une boëte de pandulle historiée d'une Vénus avec son amour dont il n'y a que le corps de la boëte fait, les bronzes n'etant que moulées et prêtes à fondre, commandée, valant avec trois autres boettes de pandulle dans le même état...2500l ' (see J. P. Samoyault, André-Charles Boulle et sa Famillle , Geneva, 1979, p. 66). A variation of this model by François Linke was sold Sotheby's New York on 26th October 2006, lot 199. The main difference between these two examples is that, in the present lot, Dasson has gilded the figures of Venus and Cupid, whereas Linke left them in patinated bronze. An almost identical clock to the present lot was sold Sotheby's New York on 19th April 2007, Lot 173. It would seem that Dasson and Linke used the Wallace Collection version by Boulle as their model, i.e., without the garlands of gilt-bronze flowers running from the chaplet held by Venus that are shown in the James A. de Rothschild Collection at Waddesdon Manor (Waddesdon Catalogue, vol. 1, pp. 59-61). The Rothschild version was not on public display but Dasson may have seen the Wallace example either at the rue Laffitte where it was in the grande galerie, or possibly at the Musée Retrospectif in Paris in 1865. Alternatively, the clock was shown at the Bethnal Green exhibition in London between 1872-1875, catalogue number 1394. Linke bought a series of master models for bronze casting from the public auctions of Dasson's workshops. A record in Linke's wife's writing notes on September 12, 1894 that 4,399 francs 45 centimes was spent on a group of Dasson models, by far the most important group of such purchases made by Linke. A version of the bronze seated figure of Venus Marina, circa 1715 after La Lorrain, is in the Getty Museum (74.SB.16).