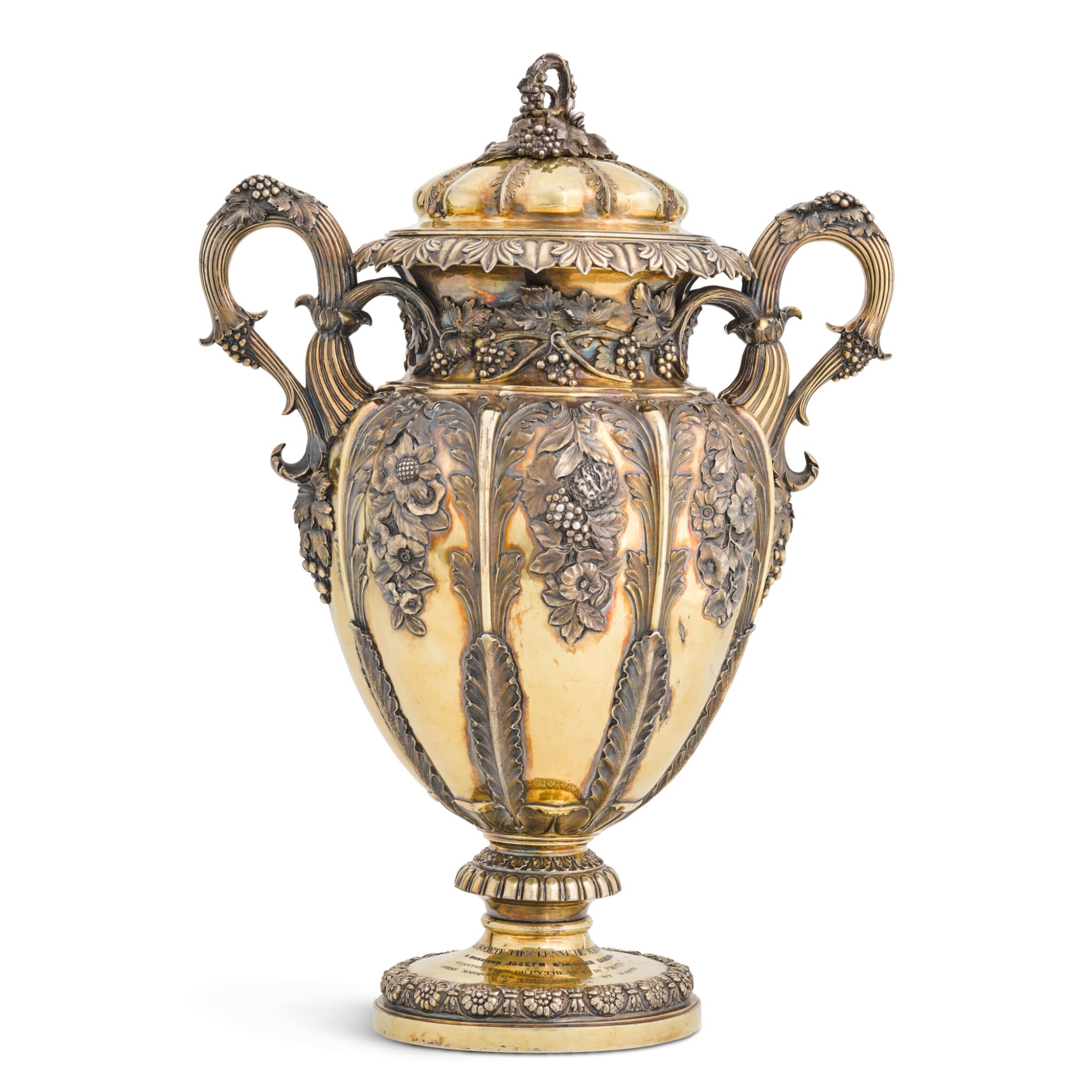 Clear hallmarks. Rocks slightly on a flat surface and leans slightly to one side. Some minor wear to the gilding and minor surface dents and scratches.

‘The announcement of the death [on 27 April 1885] of Mr. J.D. Samuda, J.P., the well-known shipbuilder of Millwall, and formerly Liberal member of Parliament for the Tower Hamlets, cast a gloom over Poplar and the surrounding district, on Tuesday evening. Mr. Samuda had been in imperfect health for some time. . . .
‘Mr. Samuda was the second, but only surviving, son of the late Mr. A. Samuda, an East and West India merchant, of South-street, Finsbury, by his marriage with Joy, daughter of the late Mr. H. D’Aguilar, of Enfield-chase, Middlesex. Mr. Samuda was born [on 21 May] 1813, and was a Commissioner of Lieutenancy for London, a Deputy-Lieutenant for the Tower Hamlets and a magistrate for Middlesex and Westminster. He became a civil engineer in 1832, was for many years a member of the Institute of Civil Engineers, and for some time a vice-president of the Institute of Naval Architects, and was formerly Lieut-Colonel of the 1st Tower Hamlets Rifle Volunteers.
‘In 1832 he entered into partnership with his brother Mr. Jacob Samuda, in the engineering business, which was chiefly for the first 10 years that of constructing marine engines. In 1843 they turned their attention to shipbuilding, and in the following years Mr. Jacob Samuda was killed in the bursting of the boiler of the Gipsy Queen, one of the first ships the firm had built. Since that time the firm has built many ships, including her Majesty's troopship Tamar [1863], her Majesty's ship Neptune [1874], her Majesty’s ship Belleisle [1876], her Majesty's ship Orion [1879], two ironclads for the Brazilian Government, and numbers for the merchant service. . . .
‘Mr. Samuda married, in 1837, Louisa, daughter of the late Mr. Samuel Ballin, of Holloway, Middlesex. The news of Mr. Samuda’s death has been received with great regret, not only by his old constituents, but by a large circle of friends and by the commercial world generally.’ (The East End Local Advertiser and Tower Hamlets Independent, London, Saturday, 2 May 1885, p. 7c)