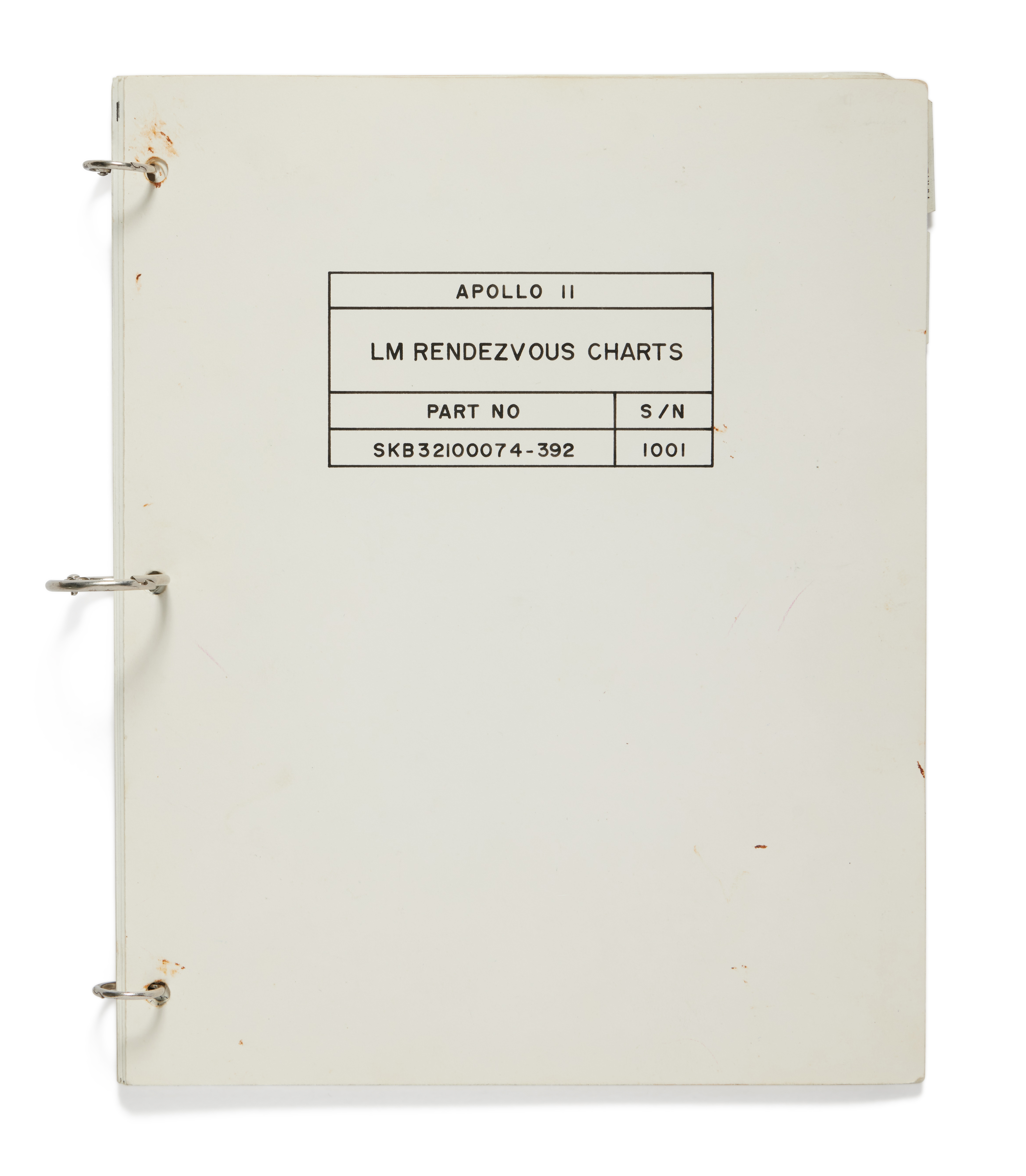 10 1/2 by 8 3/8 inches. 24 pp. on 13 leaves of card stock, 11 tabbed sections. Original printed thick card stock covers, punched, bound at spine with three original metal rings. Several pages with at times extensive manuscript notations in black felt tip pen, in ALDRIN'S HAND, as well as several of pre-flight notations in fine-tipped, black felt pen, in an unknown hand. This lot will be accompanied by a Typed Letter Signed from BUZZ ALDRIN.

INSIDE FRONT COVER SIGNED AND INSCRIBED BY BUZZ ALDRIN IN BLUE INK, "THIS LM RENDEZVOUS CHARTS MANUAL WAS CARRIED TO THE LUNAR SURFACE IN 'EAGLE' DURING THE FIRST LUNAR LANDING ON JULY 20, 1969/IT WAS USED BY NEIL ARMSTRONG AND MYSELF AND CONTAINS CRITICAL DATA AND CHARTS THAT ASSISTED OUR RENDEZVOUS MANEUVERS AFTER LEAVING THE LUNAR SURFACE ON JULY 21, 1969/BUZZ ALDRIN/APOLLO XI LUNAR MODULE PILOT"

THE CHARTS THAT ALLOWED LUNAR MODULE EAGLE TO SAFELY DOCK WITH COMMAND MODULE COLUMBIA AFTER LIFTOFF FROM THE LUNAR SURFACE—WITH REAL-TIME MANUSCRIPT NOTATIONS BY ALDRIN, DOCUMENTING THE CRITICAL DATA FOR THEIR RENDEZVOUS

As I state on the inside front cover of this rendezvous charts manual, it "was used by Neil Armstrong and myself and contains critical data and charts that assisted our rendezvous maneuvers after leaving the lunar surface on July 21, 1969."

These charts were used for rendezvous and docking with the Command and Service Module (CSM) after the Lunar Module (LM) lifted off from the lunar surface. The rendezvous was called the coelliptic rendezvous method and entailed three phases: the Coelliptic Sequence Initiation (CSI) burn, the Constant Delta Height (CDH) burn, and the Terminal Phase Initiation (TPI) burn. This rendezvous method allowed for a slower, easier set of course adjustments so that the LM would be on the right path to meet the CSM in the same orbit.

Between the CDH and the TPI burn phases, Neil and I would make similar course adjustments to those that I had made on Gemini XII. The pages with writing on them are where I read the burn data from the Display and Keyboard (DSKY) user interface of the Apollo Guidance Computer (AGC) and wrote them in the proper spaces to help me determine the rate of approach (R-Dot). Eagle's R-Dot was a bit higher than where the planners had estimated it to be at that point in the rendezvous. The manual includes several different scenarios and graphs that would be used if rendezvous positions were to change, which is why only certain pages are filled out.

This manual from Apollo 11 is one of the few objects used both in lunar orbit and on the Sea of Tranquility. It is a rare example of an astronaut flight-certified object used during the first landing on the Moon."