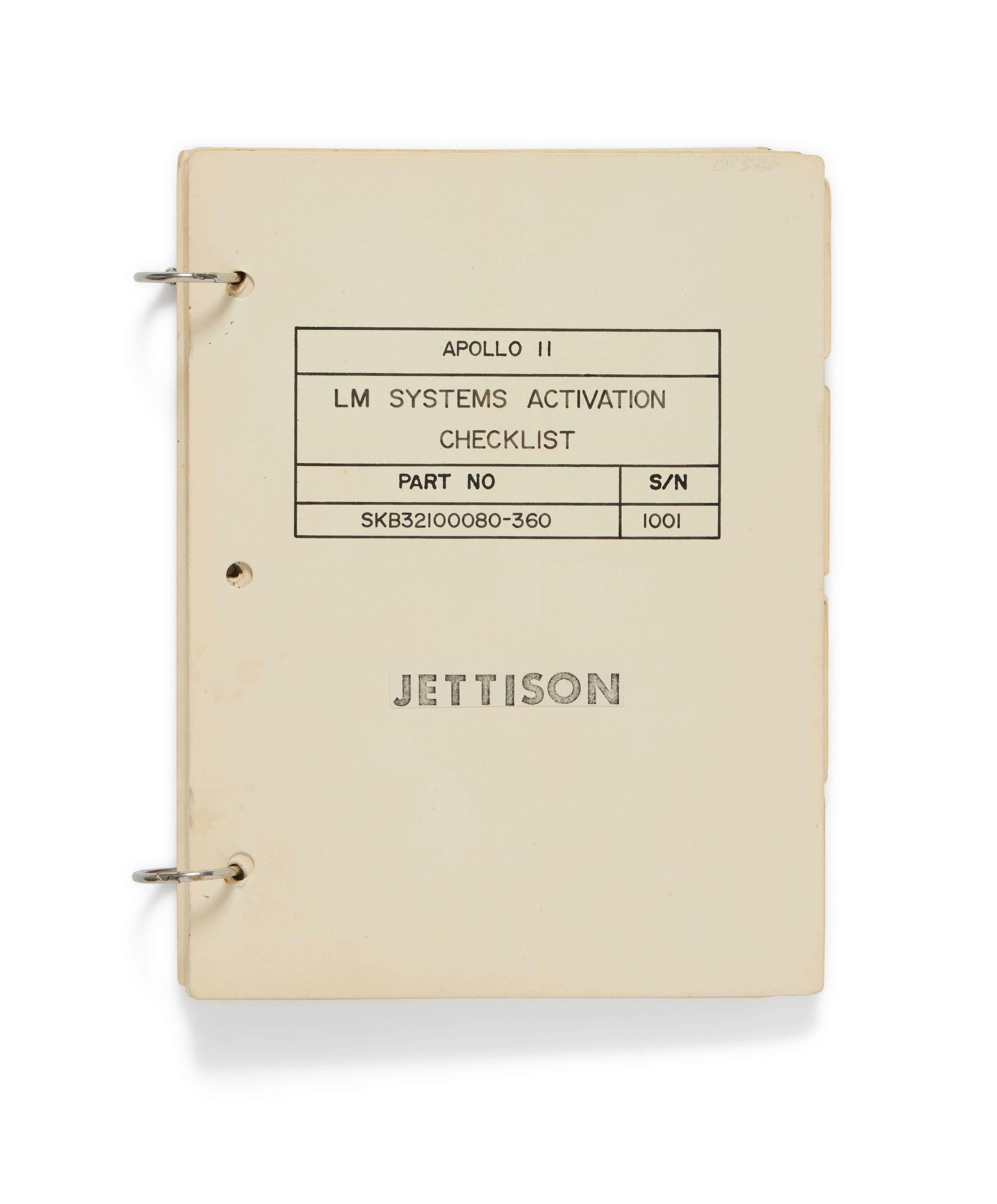 8 by 6 inches. 69 pp. on 36 leaves of card stock, divided into 25 tabbed sections. Original printed thick card stock covers, punched and bound at spine with two original metal rings. Strip of printed paper reading, "JETTISON," affixed to front cover at center. This lot will be accompanied by a Typed Letter Signed from BUZZ ALDRIN.

With extensive manuscripts notations throughout in three different hands, as follows:

INSIDE FRONT COVER SIGNED AND INSCRIBED BY BUZZ ALDRIN IN BLUE BALLPOINT PEN, "FLOWN TO THE LUNAR SURFACE/BUZZ ALDRIN/APOLLO XI"

THE CHECKLIST USED BY ALDRIN AND ARMSTRONG TO DOCUMENT THE STATE OF THE LUNAR MODULE EAGLE ON ITS COAST OUT TO THE MOON — WITH THEIR EXTENSIVE REAL-TIME ANNOTATIONS, MADE USING THE VERY PEN THAT SAVED THE MISSION (SEE LOT 15) AS WELL AS NOTATIONS DOCUMENTING ADDITIONAL ITEMS TAKEN TO THE LUNAR SURFACE IN EAGLE

Intended to be discarded on the lunar surface in the "Jettison" bag, along with several other items in order to lighten the load of the Lunar Module for re-ascent, the LM Systems Activation Checklist was thankfully retained instead, and is a remarkable record of a crucial portion of the lunar landing.

The first page of the checklist, entitled "CSM TO LM TRANSFER LIST," is particularly interesting, as it includes manuscript notations in three different hands, one being pre-flight, the others being real-time, and documents the transfer of a number of additional items from the Command Module to the Lunar Module that were not printed as part of the checklist prior to the mission; these items include "Tissues", "Snacks", "Monocular", and most interestingly, the molded earpiece included in this sale (Lot 24), confirming that it was in fact taken by Aldrin to the lunar surface. In addition, page ACT-24 of this checklist includes a diagram of LM Circuit Panel 16 which shows – on line 3 under stab/cont (stability and control) – the Eng Arm (engine arm) circuit breaker switch that either Armstrong or Aldrin accidentally broke off. Buzz fixed the problem with his felt tip pen, which had he not been able to do, the LM ascent stage engine would not have lit, and they would have been stranded on the Moon. The circuit breaker switch and pen that saved the mission, and possibly the entire Apollo program, are included in this sale (Lot 15).

During the coast out to the Moon, it was necessary to open the Lunar Module (LM) to inspect it for any damage or lost material that occurred during the launch. We pressurized the LM, opened the hatch, and inspected the tunnel and the insides of the LM. This LM Systems Activation Checklist contains information concerning the LM and how to inspect and power up the spacecraft. As an example, the second page of the checklist explains how Neil and I would open the tunnel hatch for inspection of the tunnel. The page instructed us to look at the tunnel rim to check the alignment between the Command Service Module (CSM) and the LM. This was important since we had to know this angle for the transfer of guidance and navigation information between the CSM's CMC (Command Module Computer) and the LM's LGC (Lunar Guidance Computer). The mission transcript shows that we reported to Houston that the angle was +2.05 degrees off from a perfect docking angle, and this data was written down by me on page TLC-1 of this checklist. This meant that Mike Collins did a great job in our initial docking and retrieval of Eagle.

We used this checklist to assist us in the power up of Eagle's systems. The checklist provided circuit breaker diagrams, sections where navigation data could be handwritten for future reference, pressure of the oxygen tanks and the voltage stored in the batteries, and communications tests between Mission Control and the CSM. Once we completed all activation checks, we powered down the LM and the hatches were closed.

This LM Systems Activation Checklist from Apollo 11 is one of the few objects used both in lunar orbit and on the Sea of Tranquility. It is a rare example of an astronaut flight-certified object used during the first landing on the Moon."