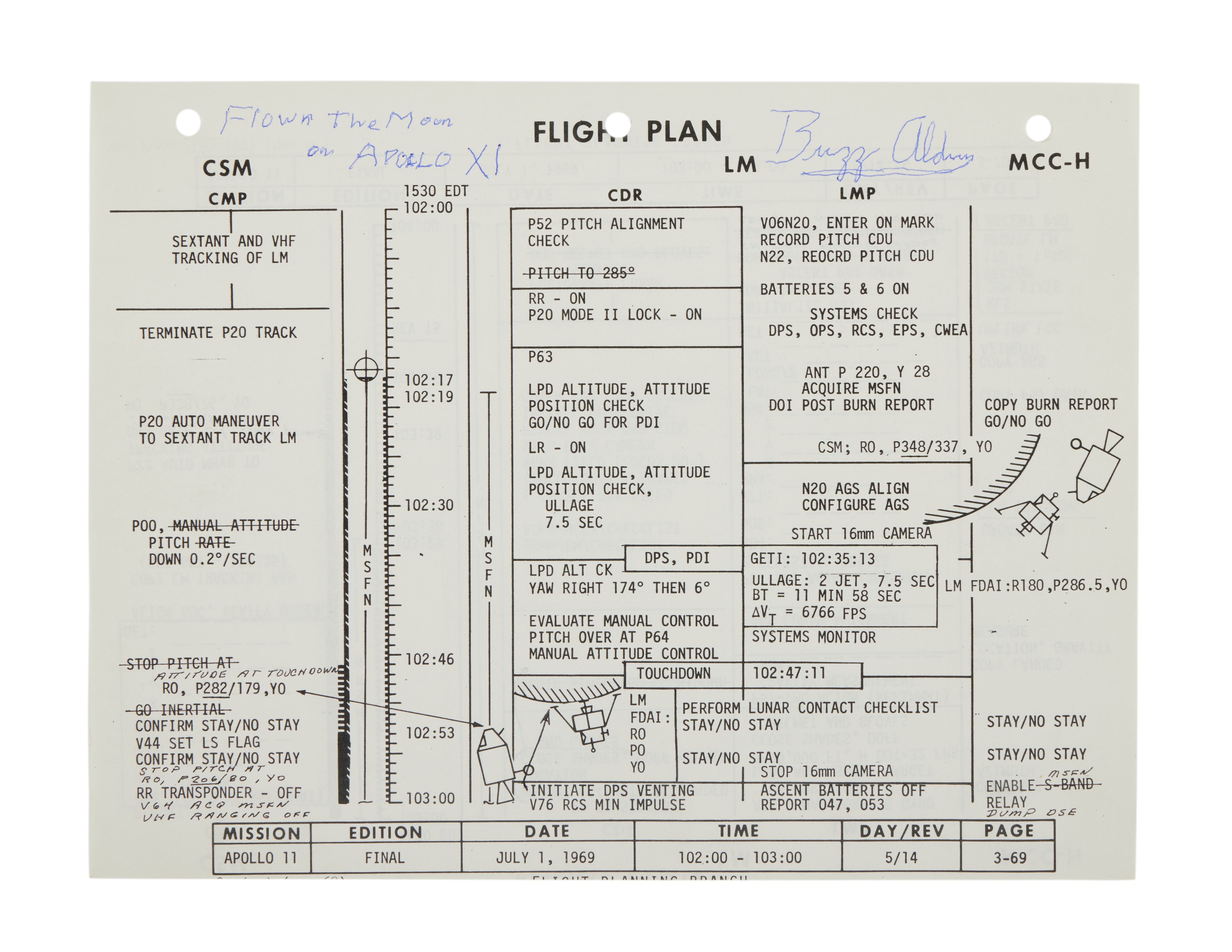 10 1/2 by 8 inches. Punched at left margin. Several pre-flight manuscript notations in fine-tipped black felt pen, in an unknown hand. This lot will be accompanied by a Typed Letter Signed from BUZZ ALDRIN.

SIGNED AND INSCRIBED BY BUZZ ALDRIN IN BLUE BALLPOINT PEN, “FLOWN TO THE MOON ON APOLLO XI/BUZZ ALDRIN”

This sheet of the Apollo 11 flight plan details the touchdown of the lunar module and the first hour of the first human landing on the lunar surface. Page 69 describes all tasks that the Mission Commander Neil Armstrong, Lunar Module Pilot Buzz Aldrin, Command Module Pilot Michael Collins, and Mission Control Center- Houston (MCC-H) had to complete before, during, and immediately after the landing of the Lunar Module. Page 70 demonstrates all tasks for the first hour after touchdown on the lunar surface, including the now iconic instructions to notify Mission Control Center Houston that “The Eagle” has landed.

This page has the complete story of the landing: from P52, the “Inertial Maneuvering Unit Realign” to make sure the Lunar Module was in the proper position to fire the Descent Propulsion System (DPS), to P63, the “braking phase” of the landing or Powered Descent Initiation, to P64, the “pitch over” (when the LM rotates to the vertical so the CDR can see the landing site to Touchdown on the Sea of Tranquility.)

Page 3-69 shows that I as the Lunar Module Pilot had to start the Mauer 16mm DAC (Data Acquisition Camera) that visually recorded mankind’s first landing on the Moon. The first of the Stay/No Stay checks via Mission Control are noted at the bottom of the page. Page 3-70 shows the first hour after touchdown. Mission Control had instructions to copy that Eagle has landed. This instruction refers to Neil Armstrong stating, “Houston, Tranquility Base here. The Eagle has landed!” and Charlie Duke’s response, “Roger Tranquility. We copy you on the ground.” The rest of the page deals with preparing the Lunar Module for the lunar stay as well as Neil snapping photos of the surface in the event of a need to abort and leave the surface.

This Flight Plan page 3-69/70 is one of the few objects carried into lunar orbit and is also a rare example of an astronaut flight-certified object used during our mission to be the first humans to land on the Moon."