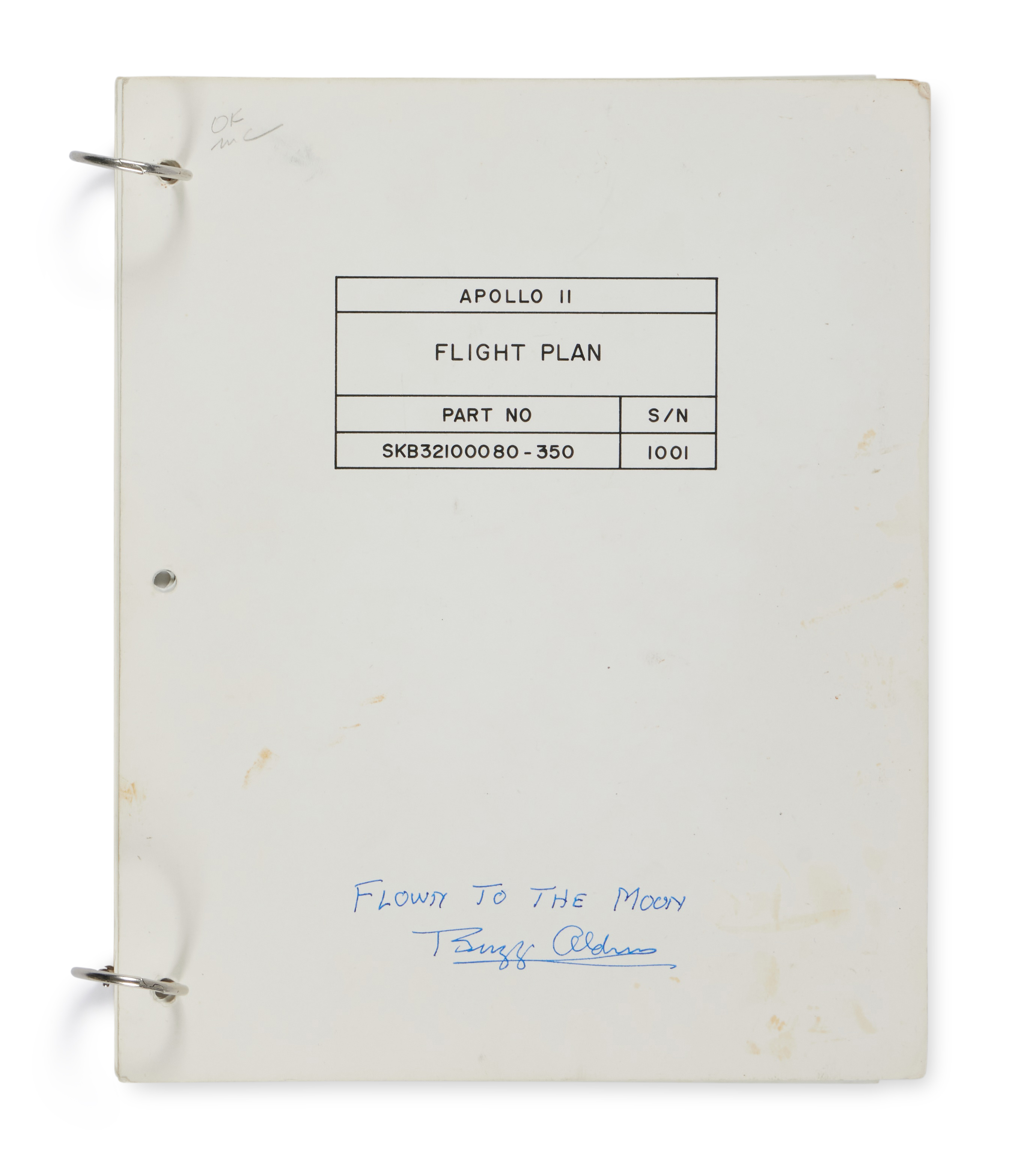 10 1/2 by 8 1/2 inches. 11 pp. on 7 leaves. Original printed think card stock covers, bound at spine with original metal rings. Notation in pencil to front cover in MICHAEL COLLINS' HAND, "OK MC." This lot will be accompanied by a Typed Letter Signed from BUZZ ALDRIN.

FIRST PAGE SIGNED AND INSCRIBED BY BUZZ ALDRIN IN BLUE BALLPOINT PEN, "CARRIED ON AND USED DURING THE FLIGHT OF APOLLO XI, JULY 16 TO 24, 1969/BUZZ ALDRIN/APOLLO XI LUNAR MODULE PILOT"

The complete Section VI of the Apollo 11 Flight Plan, offered together with the covers of the full flight plan. The pages enclosed show the TIMELINE OF THE MISSION FROM LAUNCH TO SPLASHDOWN, and contain descriptions of the LUNAR MODULE LANDING, the LUNAR SURFACE EVA (Moonwalk), and LIFTOFF FROM THE MOON.

BUZZ ALDRIN'S provenance letter reads, in full: "On July 16th, 1969, Neil Armstrong, Michael Collins, and I lifted off from Pad 39A at the John F. Kennedy Space Center on our journey to perform humankind's first landing on the Moon at the Sea of Tranquility.

This nine-page section is the last section contained within the Apollo 11 Flight Plan. Section VI of the flight plan is a complete summary of the entire mission. The pages show an abbreviated sequence of the entire mission from Launch to Splashdown. Section VI is the most complete section of the entire Apollo 11 Flight Plan and includes the Saturn V Liftoff, the Lunar Module Eagle's touchdown on the surface of the Moon, Neil Armstrong's and my moonwalk, the Eagle's liftoff from the Moon, as well as our reentry and splashdown in the Pacific Ocean as we completed our mission. Both the title cover and back cover of the entire flown flight plan are included with the complete nine-page summary.

This Apollo 11 Flight Plan Summary with Covers is one of the few objects carried into lunar orbit. It is also a rare example of an astronaut flight-certified object used during our mission to become the first humans to land on the Moon."