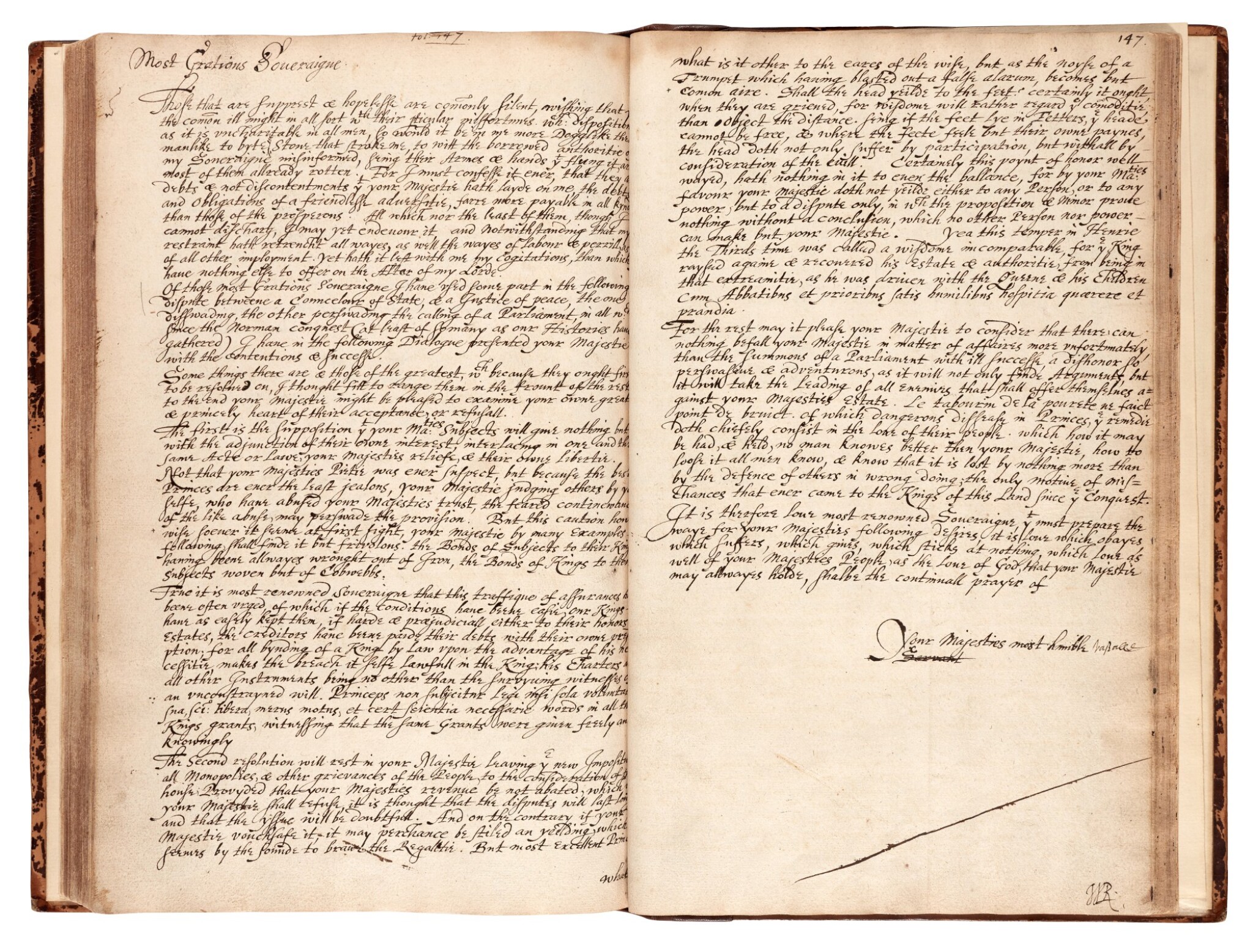 comprising copies of tracts on military, naval, political and Spanish subjects, including the following tracts and letters by Ralegh:

"The Match propounded by the Savoian betweene the Ladie Elizabeth, & Prince of Piemont" (fols 99r-105r)

"A Discourse touching a Mariage betweene Prince Henrie and a Daughter of Savoye. 1611" (fols 105r-9v)

A Dialogue between a Counsellor of State and a Justice of the Peace, with autograph corrections and revisions to the dedicatory epistle to King James I, and initialled ("WR") (fols 146v-70v)

The volume also including the following works by other authors:

"Relation, or Discoverie of the Portes, Harbours, Fortes, & Citties [of Spanish America]" by Baptista Antonelli (fols 30-39), with marginal notes by Ralegh including on the author ("Note thatt this Baptista Antonelli, was employed Ingener into the west Indies, by King Philippe the 2: after thatt sr frances Drake had taken Carthegena, st Domingo &c: and this relation was made the the sayed kinge", fol. 39r)

"Whether it be probably, upon the whole case, that the Spaniards will render the Towne of Wesell &c" (fol. 59)

"An Introduction or A.B.C. to the warre dedicated to King Edwarde the Sixte ... by Thomas Awdley newly corrected in the first yeare of Queene Marie" (fols 74-77r)

"A discource of marshall dicipline written to king Ed. the sixt by Cap: Audlie", titled in Ralegh's hand (fols 78-89)

"Observations in Fraunce by Crow Woodward gent: from Monseur Strozze generall of all thinfantrie of Fraunce" (fols 131v-135r)

[Observations touching Trade and Commerce with the Hollander] (here untitled) by John Keymer and here ascribed to him, but sometimes attributed to Ralegh (fols 139r-45v)

in three professional secretary hands, with a number of minor autograph annotations by Ralegh throughout, 142 numbered leaves (numbered 19-170 but misnumbered so without fols 90-99), with additonal later portrait print of Ralegh and contents page, folio (350 x 227mm, watermark of a crowned "N" in a shield with motto, similar to Heawood 3041), c.1611-15, in 18th-century blind-tooled calf with later spine gilt, rebacked, covers rubbed

AN IMPORTANT MANUSCRIPT FROM THE LIBRARY OF THE EXPLORER, COURTIER, AND WRITER SIR WALTER RALEGH. This miscellany was produced for Ralegh in the early 1610s, when he was a prisoner in the Tower of London. He had been convicted of treason in 1603, more as a result of the machinations of his many enemies at court than from any genuine plot against the new King, and although he had been granted a scaffold reprieve he remained in the Tower for more than a decade. It was a comfortable confinement during which he researched and wrote his History of the World, engaged in alchemical experiments with his friend and fellow prisoner Henry the “Wizard Earl” of Northumberland, enjoyed regular conjugal visits, and dreamed of El Dorado.

The current volume contains the most authoritative surviving text several of Ralegh’s own works from this period, which are found here in scribal copies, often with scattered autograph corrections. The longest work and most important work by Ralegh is his “Dialogue between a Counsellor of State and a Justice of the Peace”. This was written in response to the collapse of the so-called “Addled” Parliament of 1614 and sets a counsellor, who dismisses Parliaments as a pernicious intrusion on royal prerogative, against a Justice of the Peace, who claims that if handled properly they are the best way of raising taxes. Ralegh uses a wealth of historical examples to bring the argument firmly down in favour of the JP and the benefits of a well-managed Parliament. The text is addressed directly to the King. The text begins with a dedicatory epistle to the King in which Ralegh positions himself as a humble supplicant, enemy of fortune, and stoic innocent:

“Those that are suppresst & hopeless are commonly silent, wishing that the common ill might in all sort with their particular misfortunes, which disposition as it is uncharitable in all men, so would it be in me more Dogglike than manlike to bite the stone that struck me, to witt the borrowed authoritie of my Sovereign misinformed, seing their Armes & hands that flung it are most of them allready rotten. For I must confesse it ever that they are debts & not discontentments that your Majesty hath layde on me, the debts and obligations of a friendlesse adversitie, farre more payable in all kynd than those of the prosperous.”

Ralegh carefully calibrates the tone of his address to the King, even changing the subscription in which he originally describes himself as the King’s "Servant", to his "Vassall", perhaps preferring the latter’s feudal origin, which comes with connotations of mutual obligation. The treatise itself promotes Ralegh’s own agenda: a well-managed Parliament depends on an experienced Member who can lead it and promote the crown’s interests – a role for which Ralegh undoubtedly considered himself admirably suited. This tract enjoyed a widespread circulation as its defence of Parliamentary privilege brought the tract new and radical readers in the increasingly fractious period leading to the Civil War. Some 40 manuscript copies are recorded in CELM, and it was printed surreptitiously in 1628.

Ralegh’s own attempts to present himself as an advisor to the monarch can be seen in closely related discourses advising on the marriage options for the King’s eldest children. He argues against proffered marriages into the Ducal house of Savoy: such an alliance would draw the nation into northern Italian affairs that were of no domestic advantage, and Savoy was Catholic and closely allied to Spain. The manuscript also provides a wealth of insight into Ralegh’s varied interests in the years of his imprisonment. The first 70 pages are given over to treatises on Spain and Spanish America, naturally enough given Ralegh’s long interest in the New World and his continued hopes of finding gold up the Orinoco river. The manuscript also includes a number of pieces on various military topics, including the military forces of England, France and the Low Countries.

The range of subjects covered by this manuscript are a testament not only to Ralegh’s broad interests but also to his reading and library. Ralegh’s manuscript commonplace book (British Library Add. MS 57555), mostly used for research notes for his History of the World, includes a list of just over 500 books which were kept in his rooms in the Tower. However, only 15 books, manuscripts, and maps from Ralegh’s library can be identified today (see CELM RaW 1026-1038). Only four of these are in private hands: a map owned by the Duke of Northumberland; two of the three volumes of his copy of Tasso (parte seconda sold Phillips, 13 November 1997, lot 351; parte terza sold Bonham’s, London, 11 March 2020, lot 48), and his copy of Nicolas Vignier’s Theatre de L’Antichrist (Robert S. Pirie; sale of his library, Sotheby’s, New York, 2 December 2015, lot 679).

THIS MANUSCRIPT PROVIDES A UNIQUE INSIGHT INTO RALEGH’S THOUGHTS AND INTERESTS IN THE PERIOD LEADING UP TO HIS ILL-FATED FINAL VOYAGE AND IS AN EXCEPTIONALLY RARE OPPORTUNITY TO ACQUIRE A CORRECTED MANUSCRIPT BY ONE OF THE MOST FASCINATING FIGURES OF THE ELIZABETHAN AGE.