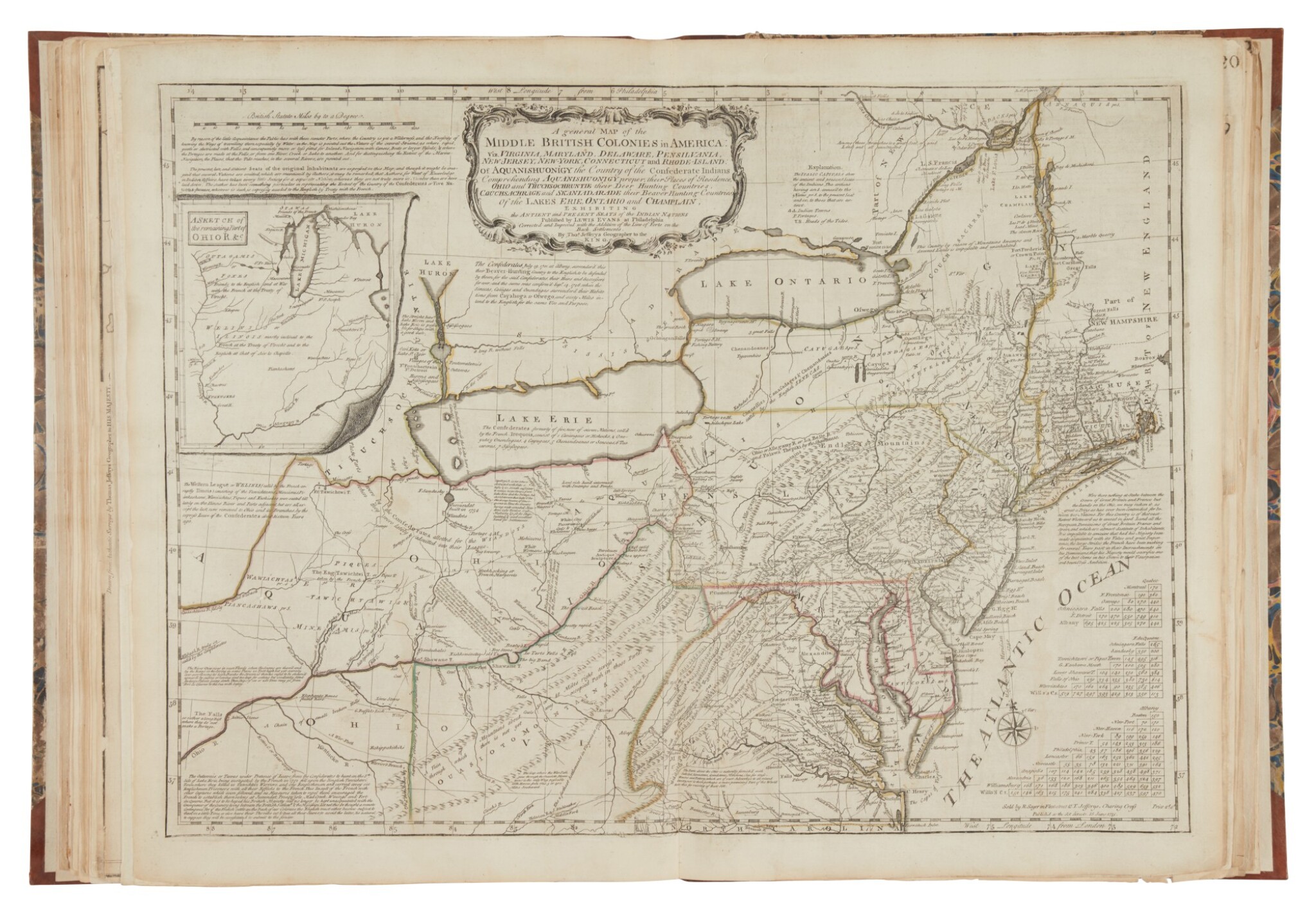 The American Atlas; or, A Geographical Description of the Whole Continent of America. London: Printed and Sold by R. Sayer and J. Bennett, 1775

Folio (543 x 350 mm). Letterpress title-page and index leaf, 22 engraved maps on 29 sheets, all save one printed on full or multiple sheets and folded, all maps partially handcolored in outline with additional coloring to one, all map sheets save one stencil-numbered, maps and text on guards; a few maps cut close or slightly cropped, some scattered soling and foxing, some neat, minor marginal restoration throughout, almost always outside plate-mark, a few short closed tears. Half calf antique over contemporary marbled boards; some rubbing to boards.

The scarce first edition of "One of the most authoritative and comprehensive atlases of America" (Ristow).

After the British victory in the Seven Years War, scientific surveys were undertaken that explored and mapped the interiors of the land east of the Mississippi River. The resulting maps, published separately by Jefferys as Geographer to the Prince of Wales (and subsequently to the King), were generally the best available for their respective regions. This atlas was published by Jefferys' successors Robert Sayer and John Bennett, and it provides a comprehensive record of the thirteen colonies during the Revolutionary War era and includes extensive reconnaissance mapping of French Canada, including Newfoundland. "As a major cartographic reference work it was, very likely, consulted by American, English, and French civilian administrators and military officers during the Revolution" (Ristow). The more common later editions do not include Lewis Evans's celebrated “Map of the Middle British Colonies in America.”

The American Atlas is comprised of the following maps:

1. Braddock Mead (alias John Green). “A Chart of North and South America, including the Atlantic and Pacific Oceans. …” Published 10 June 1775. 6 sheets joined as 3.

6. Thomas Jefferys. “An Exact Chart of the River St. Laurence from Fort Frontenac to the Island of Anticosti.” Published 25 May 1775. 2 sheets joined as one.

9. James Cook and Michael Lane. “A General Chart of the Island of Newfoundland.” Published 10 May 1775. Full sheet.

12. Braddock Mead (alias John Green). “A Map of the Most Inhabited Part of New England.” With inset “Plan of the Town of Boston” and large figural cartouche of the Pilgrims landing at Plymouth Rock. Published 29 November 1774. 4 sheets joined as 2.

13. Samuel Holland. “The Provinces of New York and New Jersey; with part of Pensilvania and the Province of Quebec.” Published 16 June 1775. 2 sheets joined as one.

15. William Scull. “A Map of Pennsylvania Exhibiting not only the Improved Parts of the Province but also its Extensive Frontiers.” Published 10 June 1775. 2 sheets as one.

16. Joshua Fry and Peter Jefferson. “A Map of the Most Inhabited Part of Virginia containing the whole Province of Maryland with Part of Pensilvania, New Jersey and North Carolina.” No date. 4 sheets joined as 2.

17. Henry Mouzon. “An Accurate Map of North and South Carolina with their Indian Frontiers.” Published 30 May 1775. 4 sheets joined as 2. With insets of “The Harbour of Port Royal” and “The Bar and Harbour of Charlestown.”

18. Thomas Jefferys. “The Coast of West Florida and Louisiana.” Published 20 February 1775. 2 sheets joined as one.

19. Lieut. Ross. “Course of the River Mississipi, from the Balise to Fort Chartres.” Published 1 June 1775. 2 sheets joined as one.