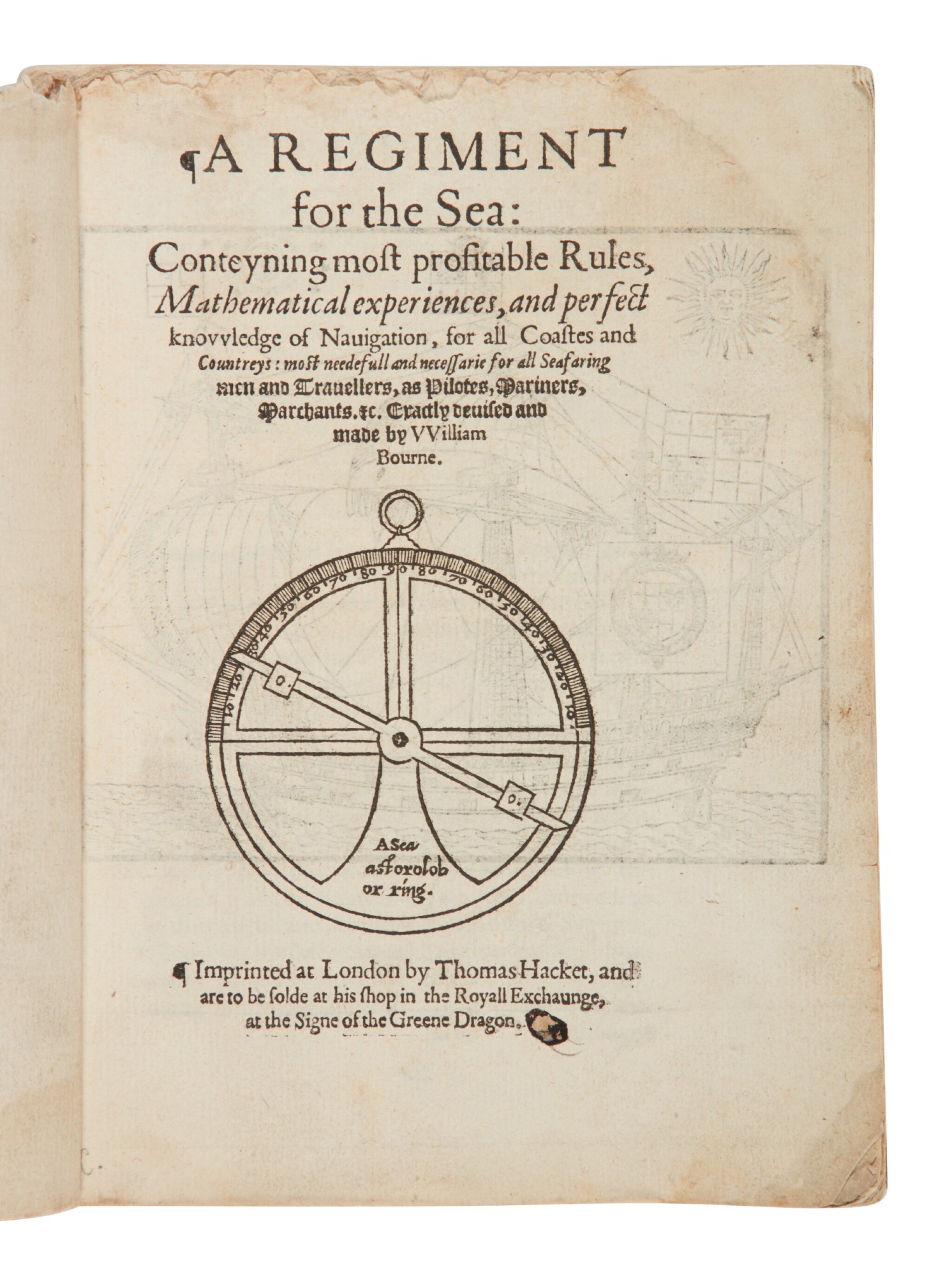 A Regiment for the Sea: Conteyning Most Profitable Rules, Mathematical Experiences, and Perfect knowledge of Navigation, for all Coastes and Countreys: most Needefull and Necessarie for all Seafaring Men and Travellers, as Pilotes, Mariners, Marchants, &c. Imprinted at London by [Henry Bynneman for] Thomas Hacket, and are to be solde at his shop in the Royall Exchaunge, at the signe of the Greene Dragon, [1574?]

4to (197 x 150 mm). Woodcut of an astrolabe on title-page, woodcut of a ship on title verso, numerous woodcut diagrams and illustrations (including a notional world map on P2v), numerous letterpress tables; old dampstaining at top margin causing fraying to top edges of a few leaves at front, including the title-page, resuting in the repair of the upper fore-edge corner of title just touching the border of the woodcut on verso, very tiny puncture at top margin. Contemporary limp vellum, early manuscript title on rear cover, "§ Regement for the sea 1574"; soiled and wrinkled, with minor fraying at edges. Blue cloth folding-case.

First edition of the first original English work on navigation. "Bourne wrote nothing of empire as an objective or motive in writing this book, but cited England's insular situation to indicate that he expected it to be useful to his countrymen. In protesting his own inadequacy, he stated 'the learned sorte of Seafaring men have no neede of this booke, yet I am assured that it is a neccessarie booke for the simplest sort of Seafaring men.' Despite his modesty, he did claim to cover some points not included in the work of Martin Cortes, and indeed, he supplemented Cortes admirably with information on the use of instruments of navigation which the Spanish author had merely described. That Bourne was not a mere theoretician and that he was aware of the range of English seafaring is evident, for he planned his book to be useful to navigators to all parts of Europe, to Africa and 'neare unto the coast of America'" (Parker, Books to Build an Empire, p. 63 & passim).

Bourne's Regiment for the Sea was enormously significant, going through some fourteen editions in English and Dutch by 1609, and being recommended as an essential book by none less than John Smith as late as 1626 in his An Accidence or The Path-way to Experience. Necessary for all Young Sea-men, or those that are Desirous to Goe to Sea. Bourne "supplemented Cortes's Arte of Navigation in exactly the right way—where it was weakest. Cortes's manual was valuable to the navigator chiefly for its detailed descriptions of how to make the principal instruments of navigation; Bourne's manual, apart from its innovations and simplifications, was valuable chiefly for its detailed instructions on how to use the instruments" (Waters, The Art of Navigation in England in Elizabethan and Early Stuart Times, p.143 & passim.)

Very rare: this is evidently the only copy to appear at auction since the dispersal of the Britwell Court Library, apart from an incomplete and otherwise very badly defective copy sold at Sotheby's London, 19 February 1968, lot 39.