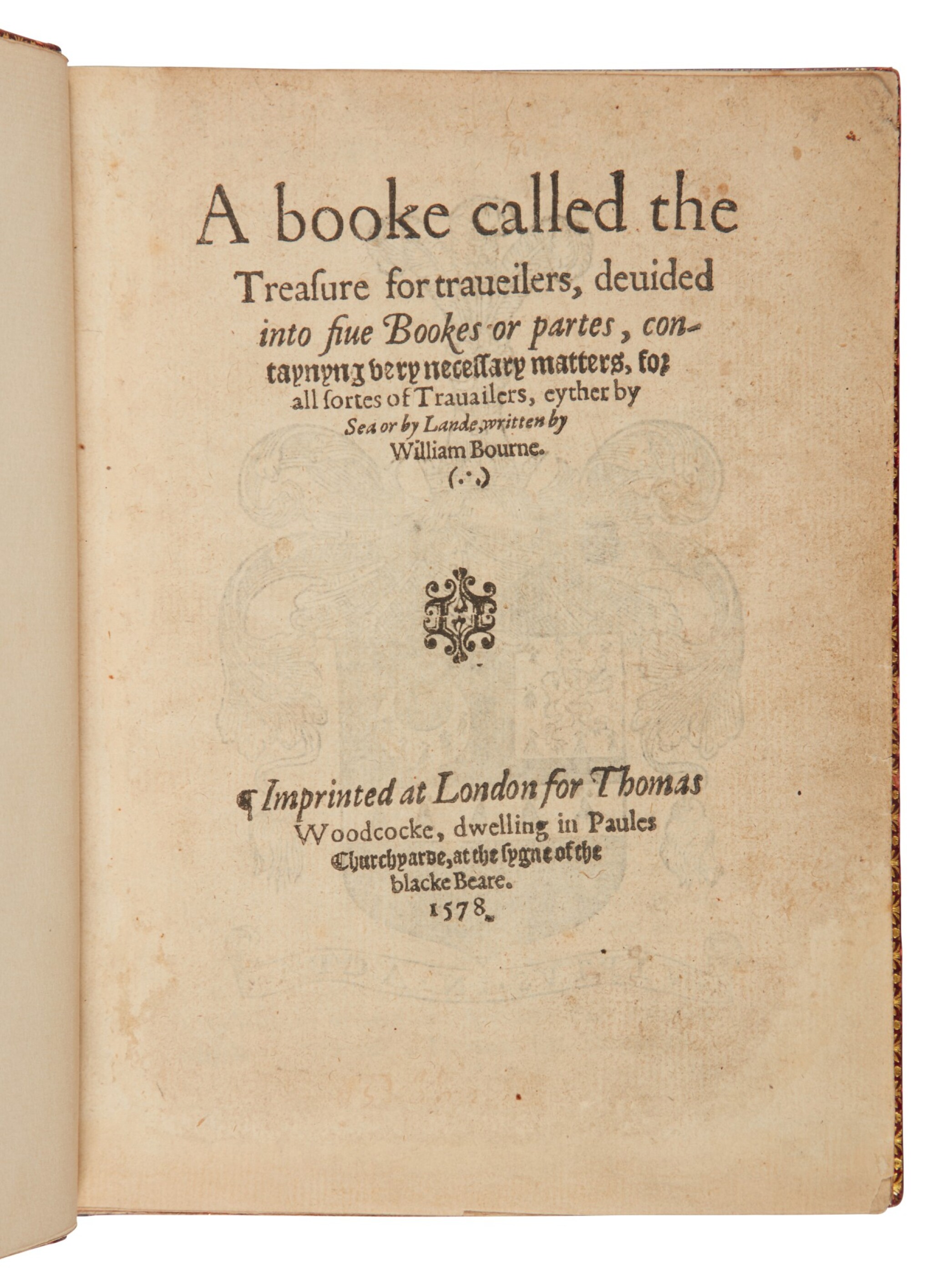 A Booke called the Treasure for Traveilers, devided into Five Bookes or Partes, contaynyng very Necessary Matters, for all Sortes of Travailers, eyther by Sea or by Lande.  Imprinted at London: [by Thomas Dawson] for Thomas Woodcocke, dwelling in Paules Churchyarde, at the sygne of the blacke Beare, 1578

4to (185 x 135 mm). Full-page woodcut arms of the dedicatee, Sir William Winter, on the title-page verso, numerous woodcut diagrams, some full-page, woodcut initial-frames, parts 3–5 with section-titles, all parts with separate pagination and signage; lacking blanks ***4 and 3F4, washed and pressed, neat restoration to margins of title-page and a few leaves at end, about three letters of the errata leaf in fine pen and ink facsimile, an occasional wormhole, mostly marginal and often neatly repaired. Red morocco gilt by Rivière; rebacked preserving original spine.

First edition. "The Treasure for Travellers was important for many reasons: because it contained the first popular explanation of surveying by triangulation, illustrated by an example of a triangulation by Bourne; because it was the first English book to describe the volumes, capacities, and proportions of ships’ hulls, and the methods, based on upon calculations of cubic content, of getting ships over bars or shoals; because it was the first to describe the sizes and weights of cordage, with rules for their computation; because it contained one of the first descriptions of the currents of the ocean, and explained in popular language the value of mathematics to the seaman” (Waters, The Art of Navigation in England in Elizabethan and Early Stuart Times, p. 147 & passim).

In this work, Bourne was the first English author to view travel as a science. He "was scornful of people who did not take proper advantage of their travel abroad [and] advised persons going into strange countries to observe the state of civilization of the region, the nature of the fortifications, access to the sea, the government, laws, buildings, … the major items in trade, commodities produced, customs and tolls. … With such observations Bourne believed the traveler could render a greater service to his country. Correct travel was to him as important as travel itself was to other expansionists of the time" (Parker, Books to Build an Empire, p. 93).

Uncommon: no copy has appeared at auction since 1997.