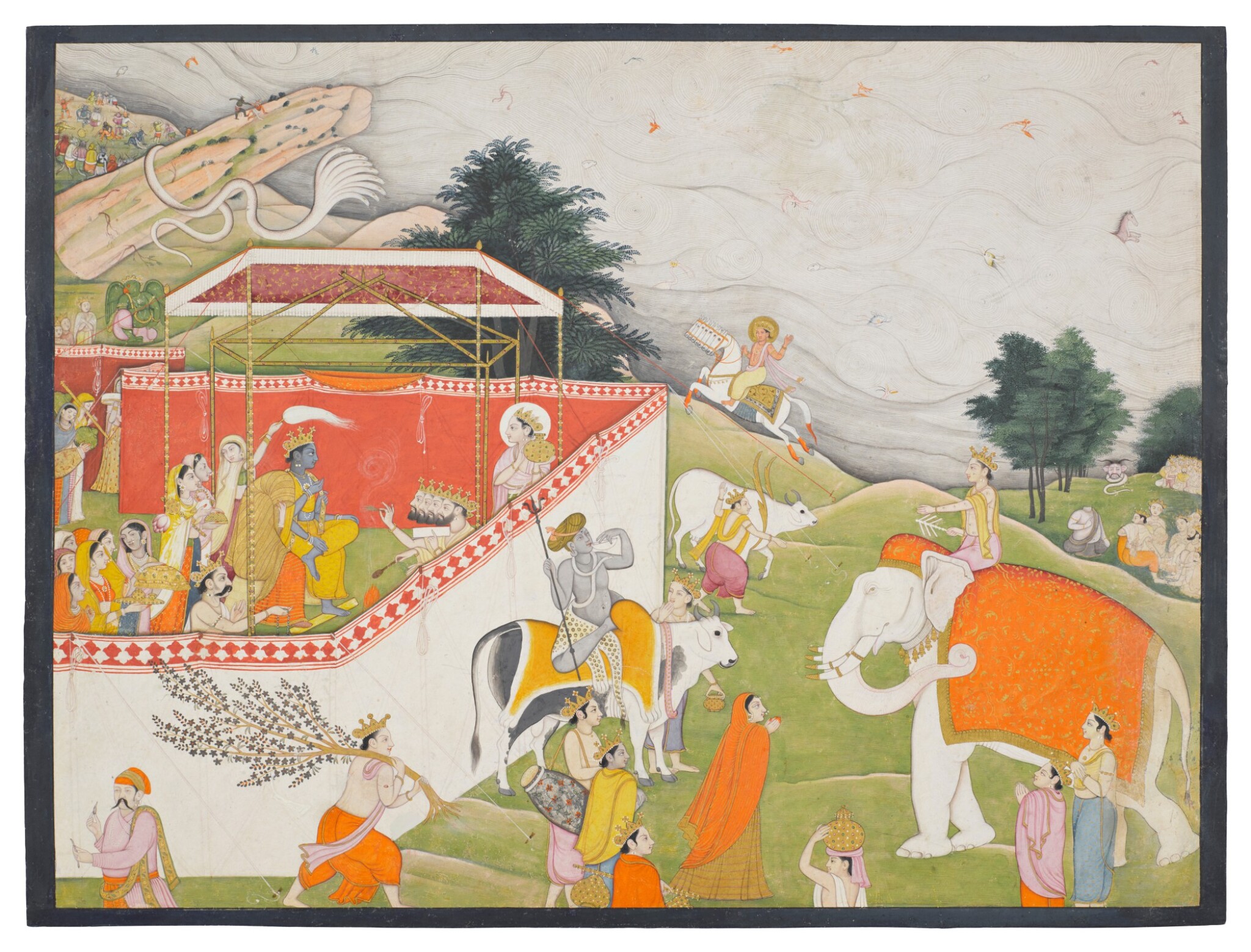 This incredibly detailed painting has been attributed to a master artist from the first generation of the family workshop of Manaku and Nainsukh. Some of the most well-known series of paintings and individual works produced in the Pahari region between 1770 and 1810 have been attributed to artists from this family. For a list of known works, see Beach, Fischer and Goswamy 2011, pp.689-694. Although it lacks an inscription on the reverse, the painting is stylistically very similar to the small-size Guler Bhagavata Purana series of circa 1780, also known as the ‘Kangra Bhagavata Purana series of 1780’ as referred to by W.G. Archer (Archer 1973, vol.I, p.293) and the ‘Modi Bhagavata Purana series’ after one of its previous owners. A closely comparable painting from the series depicting the wedding ceremony of Krishna’s parents within a similar tent enclosure is illustrated in ibid., fig.9, p.702. For another related illustration, depicting Kamsa attacking Devaki, and for further discussion on the series, see Sotheby’s London, 23 October 2019, lot 186.

Lakshmi, the goddess of fortune and prosperity, emerging from the churning of the ocean is described in the Bhagavata Purana in Book VIII, canto 8, v.8-22. The churning of the ocean of milk (samudra manthan) is one of the most well-known episodes of the Bhagavata Purana. Lord Indra, the king of the gods offended the sage Durvasa whilst being in an inebriated condition. The furious Durvasa placed a curse upon Indra and the heavens. As a result, Lakshmi, the goddess of prosperity, disappeared from the abode of the gods and dissolved into an ocean of milk. Indra and the gods went to seek the help of Vishnu. The gods were then sent to make a truce with the asuras (demons) without whose help the ocean could not be churned. Mount Meru, the mountain home of Brahma was used as a churning stick, Shiva’s snake Vasuki was used as the rope, and Vishnu took on his second avatar as Kurma (the turtle) to prevent the mountain from sinking. The churning led to several treasures emerging from the ocean, including three categories of goddesses, with Lakshmi being the first. All the gods vied for her attention, but she looked to Vishnu for help and chose him as her husband. A painting depicting the churning of the ocean from a Bhagavata Purana series dated to circa 1780-1810 sold recently in these rooms, 27 October 2021, lot 152.

Preparations for the churning of the ocean are depicted in the upper left section of the illustration. However, the main subject of our painting is the wedding celebration of Vishnu and Lakshmi. The couple are seated, with Lakshmi veiled, within an enclosure of tent panels under a canopy. The four-headed god of Creation, Brahma, is the officiating priest for the ceremony. The moon god, Chandra, is depicted to the right of Brahma holding a golden water vessel. Outside the tent enclosure, the other gods have taken possession of some of the other treasures which had emerged from the ocean. Shiva, seated on Nandi the bull, is drinking a cup of poison which had come forth from the great snake Vasuki. Surya, the sun god, is galloping away on the seven-headed horse, Ucchaihshravas. Indra, is seated on the four-tusked elephant, Airavata. Kamadhenu or Surabhi, the cow of plenty, is being led away by one of the gods, while the Parijata tree with its medicinal properties is being carried off by another.

Amrita, the nectar of immortality, was another treasure which emerged from the churning. It was immediately grabbed by the demons. While they were fighting amongst themselves, Vishnu assumed the form of his female avatar, Mohini the enchantress. The demons handed over the pot of nectar to Mohini to divide between themselves and the gods. Mohini did not intend to give any of the demons as that would make them immortal. One of the demons, Svarbhanu, realised this and disguised himself as one of the gods. He was soon discovered by Surya and Chandra, and as soon as he had consumed some of the nectar, he was beheaded by Vishnu’s discus. His body fell to the ground, but his head flew up to the sky and became immortal as Rahu, the demon who swallows the sun and the moon in eclipses. This is the scene depicted in the centre right of the painting.

For another painting attributed to the family workshop of Manaku and Nainsukh dated to circa 1780-1810, depicting an episode from the Rukmani-Harana series, see Lot 65 in the present sale.