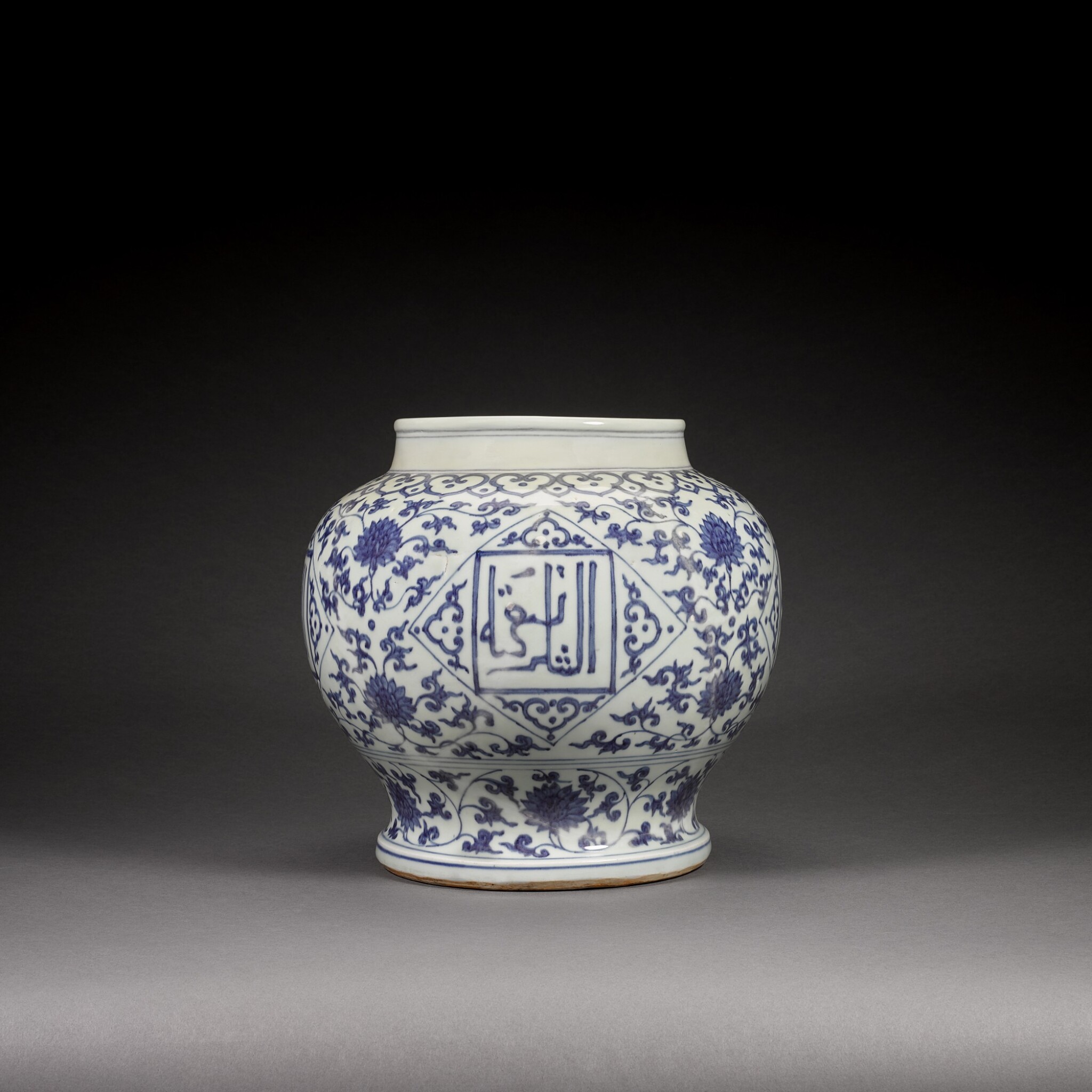 of rounded shape on short flaring foot with high rim, the main body decorated with four rhomboid cartouches containing Arabic inscriptions within a square with ‘ruyi’ heads to each corner, against a ground with scrolling vines and lotus flowers, the underside with a Zhengde six-character mark within double-circles

In overall good condition, broken and restored, the neck rebuilt from the shoulders up with several associated cracks extending to the base, the largest being a Y shaped crack extending from the shoulder to the base, areas of repainting affecting mainly the shoulder and neck, the original dark cobalt blue is still visible on the main body and foot of the jar, with extensive over spraying both inside and outside, as viewed.

In two cartouches in Arabic: 'Gratitude for His (i.e. God’s) grace', 'O God, make his land safe!'; the other two undecipherable.

The Ming emperor Zhengde was very young when he ascended the throne in 1505 and was not particularly involved or interested in ruling his empire. Many decisions were left to his court, eunuchs and royal advisors, many of whom were Muslims. The ceramic production of his reign is distinguished by a small group of porcelain wares decorated in high quality cobalt blue with Arabic, or occasionally Persian, calligraphy. They all bear a six-character mark within a double border and were probably commissioned by the Muslim eunuchs at court, who had control over the imperial kilns. The inscriptions are generally religious, occasionally including extracts from the Qur’an.

Pieces as large as the current jar are very rare. The closest comparable is a smaller vase, 25cm in height, now in the National Museum Collection, illustrated in Blue-and-White Ware of the Ming Dynasty, Book IV, CAFA, Hong Kong, 1963, p.48, pl.3. A related large jar was sold in Christie’s Hong Kong, 1 June 2011, lot 3825, and another comparable shape is now in the Capital Museum Collection, illustrated in Shoudu Bowuguang Cangcixuan, Selected Ceramics from the Capital Museum, 1991, p.125, no.115.