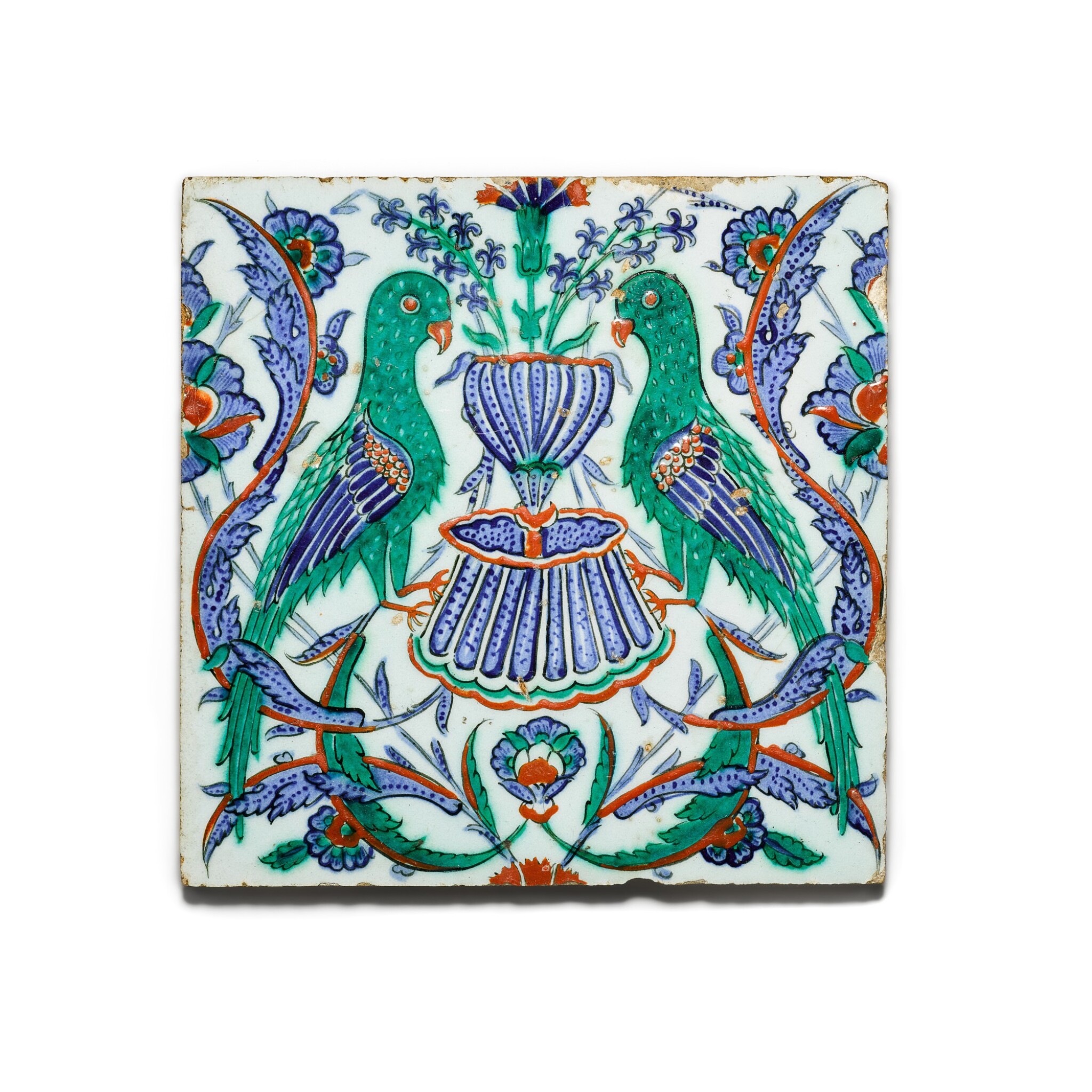 of square form painted in underglaze cobalt blue, green and relief red, outlined in black, decorated with two birds perched either side of a fountain dispensing a hyacinth bouquet, surrounded with arabesques of scrolling saz leaves and flowers

In overall good condition, intact, the surface with minor rubbing, pitting and nips, some slight losses to extremities, a chip not wider than 0,8cm. on the top right side and a break not longer than 0,7cm. located on the lower right side, the colours bright and clear, as viewed,

Figural representations on Iznik tiles are rare. Only seven other intact tiles with this iconic design of confronted birds are known, all now housed in museum collections in Europe, Turkey and the United States.

In Ottoman society, birds were ascribed many symbolic meanings. While pigeons were thought to embody the souls of departed people, peacocks were cast as birds of paradise. Given these heavenly associations, the representations of two confronting birds perched on a fountain on a dense foliage background hints strongly at the garden of Eden (Denny 2004, p.186). The birds’ green colour is associated with eternal life in Islam, while the fountain may refer to the salsabil, the spring of Paradise (Clark 2010). This scene is also a popular motif in ancient Turkish iconography, making its first appearance on early Anatolian carpets before it was employed on ceramics (Denny 2004, p.186).

The birds depicted on the present tile, belonging to a well-known series of square tiles dated from the 1570s, were identified by some scholars as falcons, the heralds of royalty and of the royal hunt (Denny 2004, p.186). On the other hand, Atil (1973) suggests these are parrots, painted to decorate private dwellings rather than religious settings. While religious institutions would only commission floral motifs, inscriptions or arabesques to adorn their walls, this piece appeals to our imagination, evoking richly embellished pavilions. This densely decorated tile would have likely been employed alongside more sober ones representing blossoming plants, recreating the serene atmosphere of a garden in a private villa.

Only seven other intact tiles with this design are known: