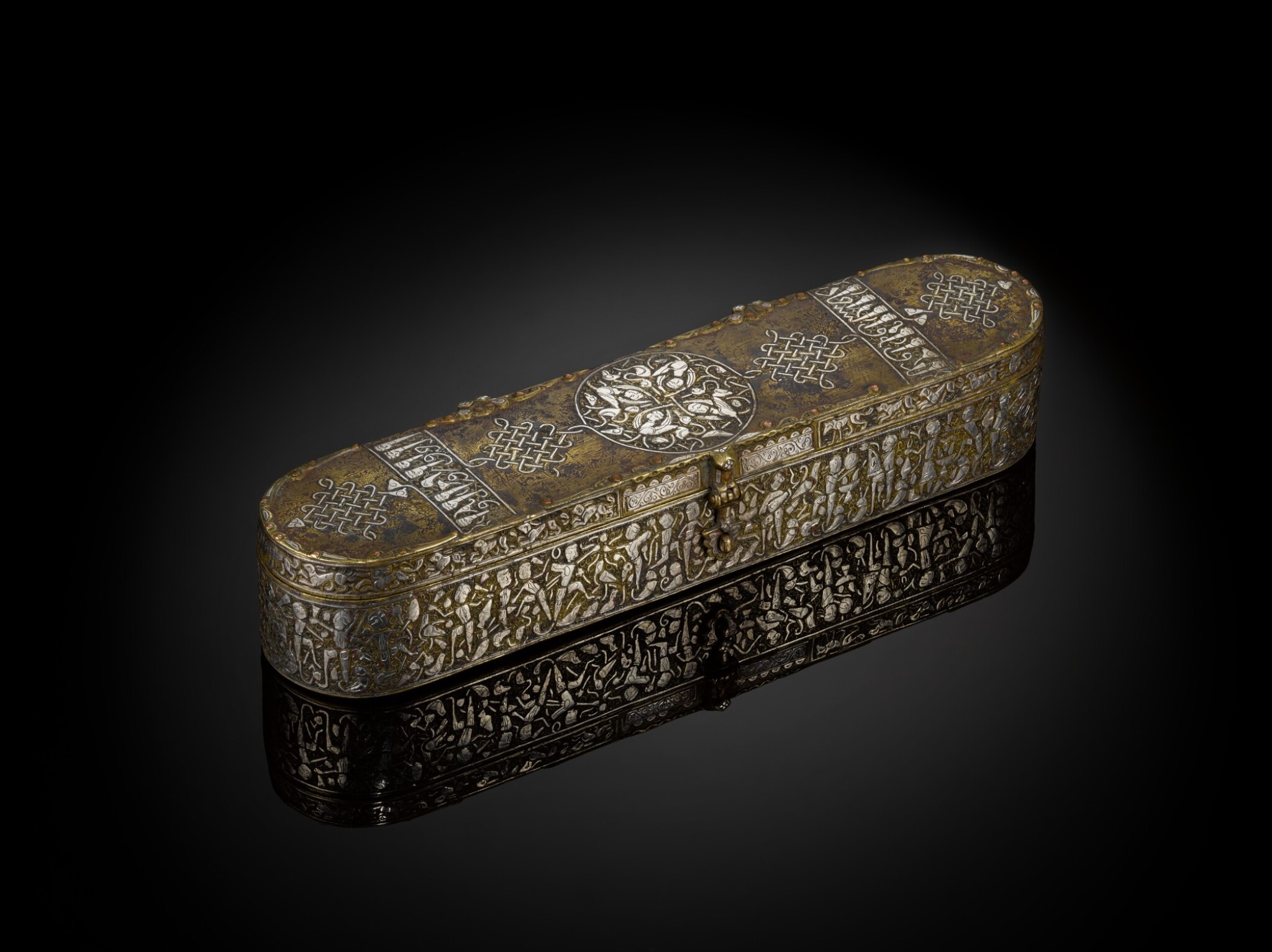 of elongated ovoid form with a hinged top, the surface of the body decorated with figures fighting and banqueting, the upper part of the lid with anthropomorphic Kufic inscriptions to each end and a central roundels containing four harpies against a foliate ground, around the lid and inside, bands of running hares and other feline animals

In good condition, most of silver survives, minor areas have been re-inlaid, the box has been cleaned with a red product which is still visible especially along the engraving lines and the narrow grooves, some scratches, minor re-inlay of the silver affecting the inside of the ink-well, some oxidation affecting mainly the interior, as viewed.

Please note Provenance for this lot: Acquired by the present owner in London, 6 April 1995. Previously in a private collection, London, pre-1970. Please note that there may be restrictions on the import of property of Iranian origin into the USA and some or all member countries of the Gulf Co-operation Council. Any buyers planning to import property of Iranian origin into any of these countries should satisfy themselves of the relevent import regime. Sotheby's will not assist buyers with the shipment of such items into the USA or the GCC. In addition, FedEx and US courier services will no longer carry Iranian-origin goods to any location. Any shipment services would need to be provided by a Fine Art shipping company.

Acquired by the present owner in London, 6 April 1995.

This magnificent penbox is a fine surviving example from Khurasan's metalware workshops in the late twelfth and early thirteenth century. Conserving most of the original inlay, it presents lively scenes of court life, depicting warriors, musicians and banqueters.

The lid is decorated with a central round encircling four harpies among vines terminating in rabbit and dog heads. The theme of harpies was common in Khurasan metalware workshops of the time, and can be found around the shoulder of a ewer in the Metropolitan Museum of Art (inv. no.44.15; published in Carboni 1997, p.24) and on two trays now in the Victoria & Albert Museum (inv. nos.181-1951 and 32-1954, both published in Melikian-Chirvani 1982, nos.29 and 36, pp.100 and 105). The harpies are encircled by vines terminating in rabbit or dog heads, another recurrent motif on contemporaneous metalwork. Similar vines are found on the Metropolitan ewer and on a qalamdan now in the Louvre (inv. no.MAO2228). The central roundel on the lid is flanked by a band of anthropomorphic calligraphy enclosed by two delicate knotworks; a similar knotwork is present on a ewer now in the Victoria and Albert Museum, dated slightly later, to the first half of the thirteenth century (inv. no.592-1898, published in Melikian-Chirvani 1982, p.116, no.45). The bands of hares chased by dogs which run around the side of the lid and inside the box are comparable to those found on a contemporaneous ewer in the British Museum (inv. no. 1848,0805.2; published in Ward 1993, p.56).

The hinges which run on the lid are testament to the original shape and material of such penboxes, which would have been ivory or wood, as such clasps are unnecessary in metal; for a comparable penbox showing hinges and clasps, see an example attributed to Iran, circa 1200, now in the David Collection, Copenhagen, inv.no.11/1982.

The body of the penbox presents an unusual and lively scene, with various characters engaged in different activities, from fighting with bows and arrows, to playing instruments such as the lute, the harp and the tambourine, to cheering and pouring drinks into cups. A very similar band runs above the zodiac signs on the Vaso Vescovali in the British Museum (inv. no. 1950,0725.1; published in Ward 1993, p.57).