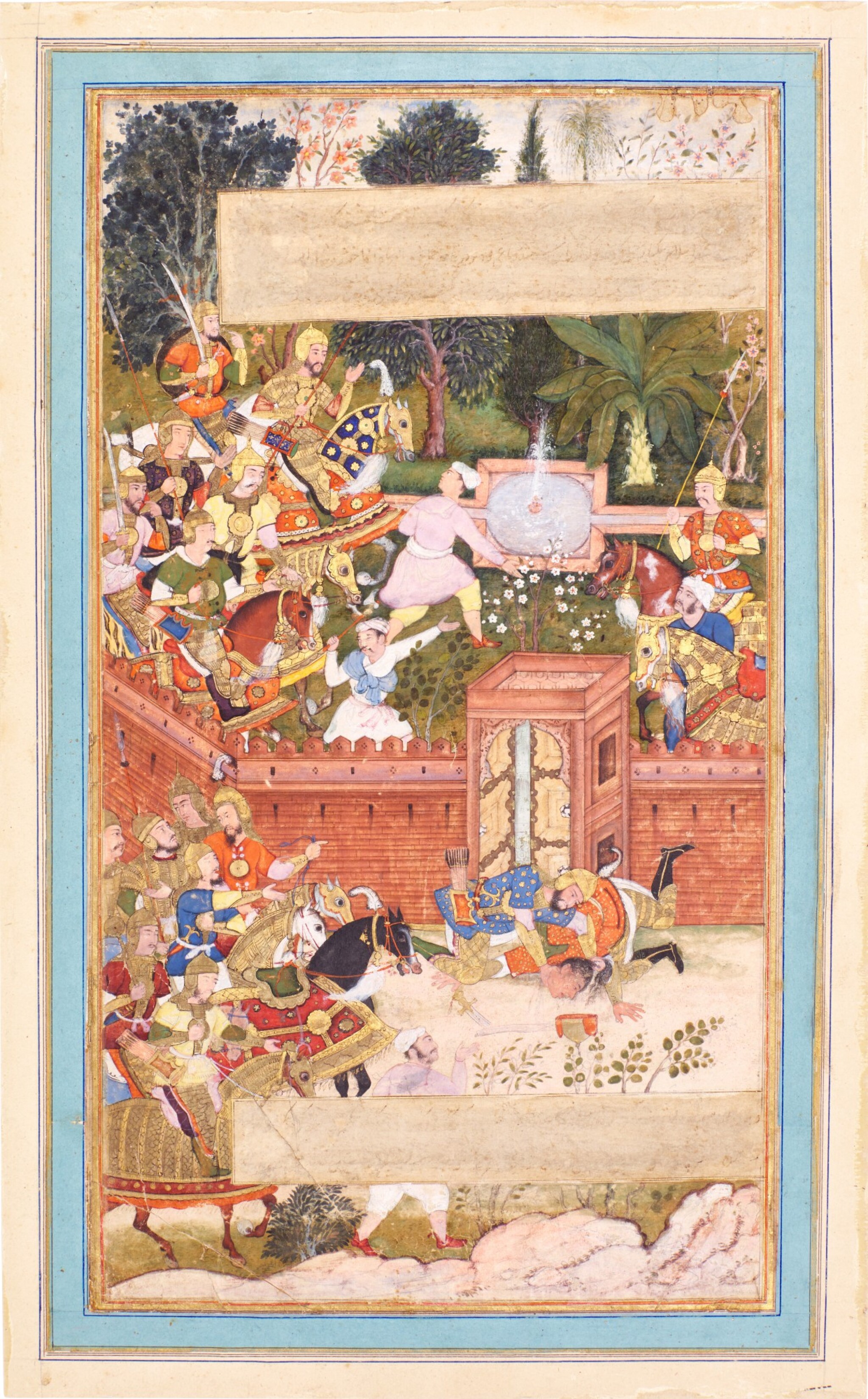 gouache with gold on paper, depicting armed and mounted soldiers within a walled garden, a soldier being captured outside the walls, ruled in colours and gold, laid down on an album page with blue inner borders, set within dark grey outer borders

In good overall condition, text erased, tears and creases to lower left corner and losses and traces of worming to upper right corner, minor scattered areas of loss and rubbing to pigment, as viewed

This large illustration is from a Mughal historical manuscript of the last decade of the sixteenth century. The text in the two panels has been erased, making it difficult to identify the exact scene depicted and therefore the specific manuscript from which it originates. However, close inspection under ultraviolet light reveals a fragment of Bal’ami’s version of Tabari’s account of the Battle of Yamama, which occurred during the Wars of Ridda in late 632 AD between the Muslim armies under Khalid Ibn al-Walid and rebellious forces under Musaylima. The final phase of the battle occurred in and around a walled garden (haditqa al-mawt), where the rebels had taken shelter. Musaylima was finally killed and his rebel forces defeated. The walled garden is clearly represented here in the miniature, with the Muslim armies of Khalid Ibn al-Walid entering at left.

Only one other Mughal illustration from Bal’ami’s History of Tabari is known and it is in the Museum of Fine Arts Boston. The Boston illustration depicts the scene of Bahram Gur killing the lions to claim the throne, and like the present page features erased text in the text panel (see Coomaraswamy 1929, no.114, where it is mistakenly described as a scene from the Shahnameh). The present page and the Boston illustration might have been part of a specific royal illustrated copy of Bal’ami’s History of Tabari in the same vein as other illustrated Mughal manuscripts of Islamic history, such as the Akhbar-i Barmakiyan; or they might have been part of a more general history such as the imperial copies of the Jami al-Tawarikh of 1596 or the Tarikh-i Alfi of the early 1590s. The size (allowing for some trimming at the edges, which is evident here), format and style of both Tabari pages (including their text panels placed within the picture area) would fit with either of these better-known manuscripts. Indeed, all of the eighteen or so extant illustrations from the imperial copy of the Tarikh-i Alfi are concerned with the early Islamic period (from the reign of Harun al-Rashid to that of al-Mu’tazz). However, the extant illustrations of the imperial Jami al-Tawarikh are all concerned with the history of Genghis Khan and the Ilkhanids (hence it is often referred to as the Chingiznama). Thus, if the present page was originally part of either of these projects, rather than an independent commission, then the Tarikh-i Alfi is its most likely context. Illustrated pages from the Tarikh-i Alfi are in the British Museum, the Freer Gallery, Washington, D.C., the Cleveland Museum of Art, the Museum of Fine Arts, Boston, the Art Institute of Chicago, the Virginia Museum of Fine Arts, the Los Angeles County Museum of Art, the San Diego Museum of Art, the Seattle Art Museum and the National Museum, New Delhi. For the latest information and references see Beach 2012, nos.11A-11D, pp.77-80.

Abu Ja’far Muhammad Ibn Jarir al-Tabari (839-923 AD) was a great scholar of the Abbasid period, most famous for his History, a monumental chronicle covering history from the Creation to the year 302 Hijri (915 AD), written in Arabic. Abu 'Ali Muhammad Ibn Muhammad (Amirak) Bal’ami (d.974 or 992 AD) was a vizier under successive rulers of the Samanid dynasty. In 963 AD he was commissioned to produce a translation of Tabari’s History, and Bal’ami’s resulting version was highly important both in terms of historiography, adding significant new information to Tabari’s original, and for being the first major prose work in New Persian. It became a central source text for many later histories written in Persian.