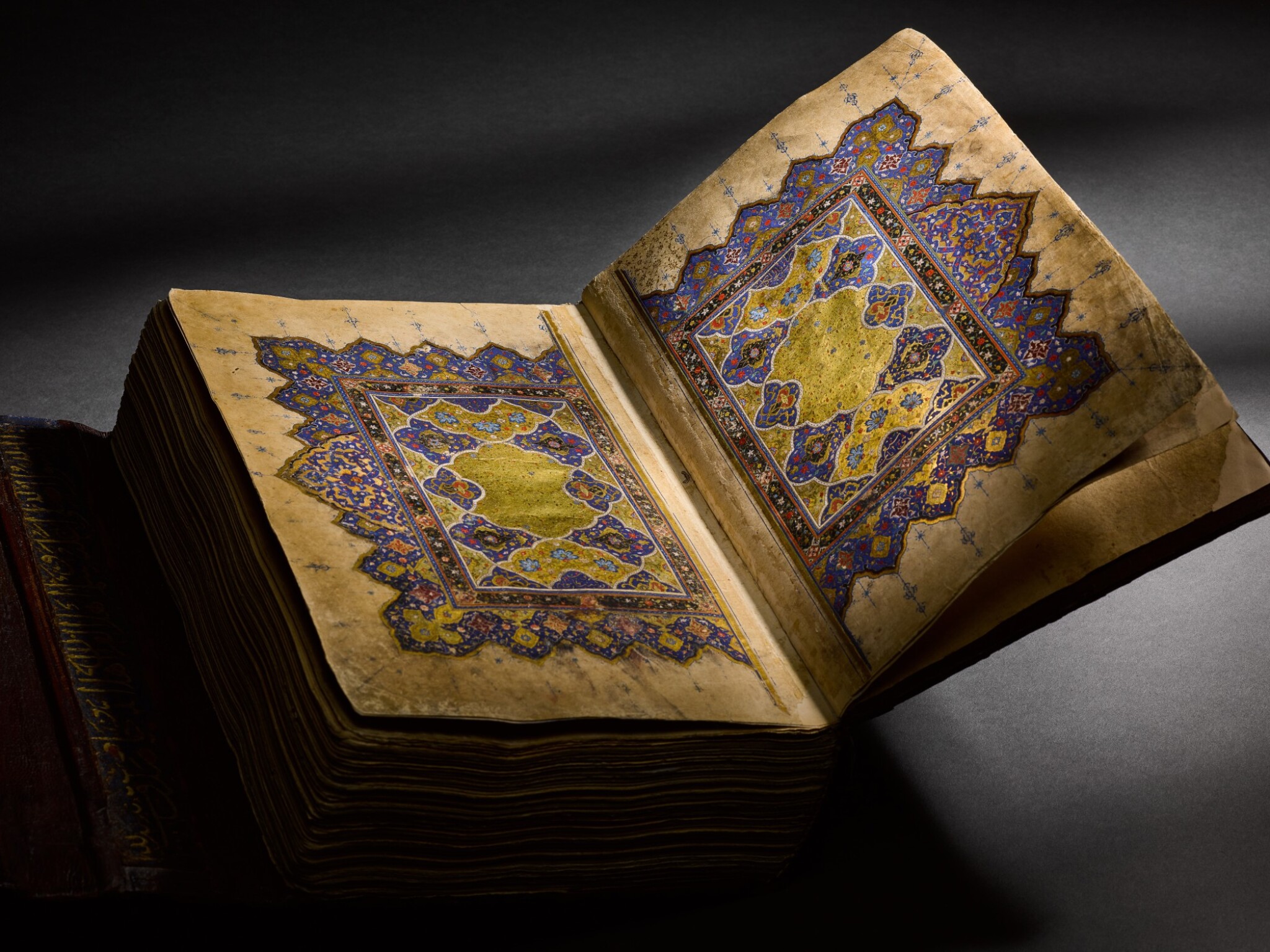 Arabic manuscript on polished cream paper, 400 leaves plus 3 fly-leaves, 12 lines to the page, written in fine naskh script in black ink against a ground sprinkled with gold, verses separated by gold and polychrome rosettes, the bismillah and name ‘Allah’ picked out in gold throughout the manuscript, surah headings in blue against gold and polychrome floral cartouches in varying styles, margins ruled in colours and gold, illuminated foliate marginal devices throughout, ff.1b-2a with an illuminated double shamsa decorated in colours and two tones of gold with an intricate weave of interlacing arabesques leading to polychrome floral cartouches, ff.2b-3a with a double page illuminated frontispiece composed of interlocking lobed polygons enclosing Surah al-Fatiha and the opening of Surah al-Baqara in gold against a ground of a different tone of gold, the decoration consisting of chinoiserie cloud bands and interlacing polychrome vines, inner black borders filled with scrolling flowers, and outer lobed margins of corresponding decoration, ff.398b-399a with an illuminated finispiece, ff.399b-400a with closing double shamsa in colours, black and gold with text in blue, f.1a with Ottoman waqf inscription dated 1190 AH/1776 AD with name of Esma Hanim Efendi daughter of vizier Es'ad Pasha, brown morocco binding with doublures composed of medallions and corner pieces of interlacing floral vines, remnants of filigree-work, the outer binding with gilt-stamped vegetal decoration, with flap

This impressive Qur’an combines a fine and balanced naskh with spectacular illumination. One of the most notable aspects is the use two different tones of gold both in the opening double shamsa as well as in the frontispiece offset against a dazzling ultramarine lapis lazuli. The verses are separated by intertwining rosettes and the name of Allah picked out in gold.

The striking illumination is comparable to a beautifully illuminated Qur’an in the Museum of Turkish and Islamic Arts, Istanbul (inv. no. TIEM 422), copied by Muhammad ibn Ahmad al-Khalili al-Tabrizi and subsequently owned by Ahmed I’s grand vizier Murad Pasha (d.1611) (Istanbul 2016, pp.280-3, no.46). The opening illumination shows a comparable tonal alternation of vibrant orange and burnt orange-brown shown in both the frontispiece and colophon of this manuscript, as is the use of black. An illuminated frame around Surah al-Kahf in that manuscript also shares a comparable arrangement to the illuminated colophon.

Unlike the majority of Safavid Qur’ans, the colophon of our manuscript is signed and dated. The quality of the fine, rhythmic script of this manuscript is unsurprising given that the scribe, Yusuf ibn ‘Abdullah, was a student of the renowned Safavid scribe 'Ala al-Din Tabrizi, son of Shams al-Din Muhammad, the firman writer for Shah Tahmasp (r.1524-76). In the colophon the master is described as the ‘Yaqut of his time’ and the ‘Sayrafi of the age’ illustrating the high regard the calligrapher inspired. Our scribe was a contemporary of other master students of ‘Ala al-Din Tabrizi such as ‘Ali Reza ‘Abbasi (Blair 2006, p.425). The refined, elegant hand, attention to detail and the level of illumination point towards an illustrious patron.

Both the calligraphy and illumination display the height of Safavid artistic achievements, and the fine gilt binding is no exception with exuberantly drawn cloudbands and polychrome filigree doublures. The spine and fore edge each include an inscription of a hadith stating, ‘The people of the Qur’an are the people of Allah and His chosen ones.’ Comparably worked bindings are published in Haldane 1983, p.79, pp.97-98, nos.82 and 96.